By Alex Talcott on March 24, 2015Comments Off on A Conversation with Gov. George Pataki 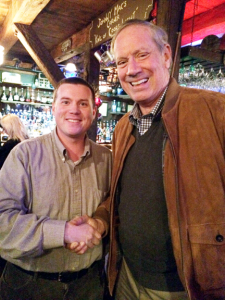 (George Pataki served as New York’s governor from 1995-2006. He is counsel with the law firm Chadbourne & Parke LLP, chairman of the Pataki-Cahill Group for business strategy, and chairman of the “We the People, Not Washington” Super PAC supporting his political activities. Pataki is a prospective 2016 Republican presidential candidate.)

On crime data, we had a multifaceted approach.

We did everything from sentencing reform to parole and early release reform to evidentiary rule reforms. And among other things, we also created a very advanced DNA databank with the state police laboratory, where we could have the records of people convicted. During the course of those 12 years we constantly expanded the number of crimes and type of crimes where people who were convicted were required to give DNA samples. It had a profound impact on allowing us to solve not just crimes committed at the time but also crimes that had been committed years in the past.

I talked with Rick Perry this month about how political leaders have absconded from the once ballyhooed “tough on crime” moniker, and I was surprised to hear a Texas Republican governor boast of alternative courts and closing prisons. New York is notorious for tough [Gov. Nelson] Rockefeller drug laws. Where is New York now in its law and order objectives?

The Rockefeller drug laws—we reformed the sentences. We wanted to have a tough but smart approach to crime. With violent crime, we definitely toughened everything—from sentences to paroles. We ended parole for violent felons, for example. That was a very difficult law to get through but we did, and expanded sentencing. But with respect to drug crimes, we did reduce mandatory sentences. And we did create “shock incarceration” camps, where the idea being that someone who had committed a drug crime and deserved, appropriately, to be separated from society at large – but we didn’t want to turn them into a hardened criminal – so we put them into drug boot camps, six to eight months, where they had intensive physical and mental counseling and conditioning, after which they would be given the opportunity to avoid being incarcerated in the broader criminal justice penal system. But the large-scale drug dealers and others, we increased the penalties.

Sadly, drug reform often is an excuse to just turn loose violent criminals. One of the hardest things I had to deal with when I was governor was convincing liberal Democratic legislators that it was appropriate to separate violent criminals from society. Too often the Left sees criminals as victims of society as opposed to the violent felons that they are.

So we took a tough approach. It was a very successful approach. And sadly, since I have left, in the name of drug reform – which we had already done – sadly my successor, particularly Eliot Spitzer and David Paterson, released a great many people who had been convicted of violent felonies earlier than they would have been released under the laws we had enacted.

I viewed your Wofford College speech [12/01/2014, Spartanburg, South Carolina] online. And in that, you allude to a bit of the approach, even bringing in Russell Simmons…

The whole “lesson of leadership” there — don’t exclude people; bring them in – how do you make decisions? The conference room is only so large. How do you decide as a leader who gets a say? Who gets invited? How many people to bring into the fold?

There is no formula. Leadership doesn’t come down to having a set formula. It comes down to having a sense when it’s appropriate to change course, when it’s appropriate to stick to your guns, and when it’s appropriate to sometimes listen to others. That’s what I always tried to do, not go at something with a particular formula. You knew the result you wanted to get. Whatever would give you the best chance to get that result is the tactic that we would use at the time. The most important thing is knowing where you want to get to. And so often in government people flounder on that. When you don’t have a clear destination, it’s going to be pretty hard to get there regardless of your tactics and whoever you include might be.

With notable exceptions like Elizabeth Warren in bankruptcy law and Barack Obama in civil rights, many politicians who are attorneys were prosecutors. Let’s talk a little about your Chadbourne & Parke renewable energy and environmental law practice and maybe something from earlier in your career, the Plunkett & Jaffe practice.

I started out with a big Wall Street law firm, and I enjoyed it very much but it just wasn’t the career that I wanted to have. So I ended up actually practicing as part of a small, boutique law firm, Plunkett & Jaffe, and we had an office in my hometown of Peekskill, where I worked with one of my closest friends at the time. We did pretty much everything. We didn’t do criminal law. There were no large corporations. There were no big businesses, so we had to just do whatever a small-town lawyer did, and I found it absolutely far more rewarding than the big practice down on Wall Street when I first got out of law school because you were dealing with real people, real problems that you could relate to as opposed to a billion-dollar deal.

Peekskill is within a couple thousand of the population of Ferguson, Missouri, albeit not part of a metropolitan area. [2010 census: Peekskill NY (23,583), Ferguson MO (21,203)]. Do you have a sense of whether Peekskill is at all militarized, or do they have appropriate equipment and training?

I can’t tell you the answer to that. I just know we had a very good police force when I was there [mayor, 1981-4] and I’m a great believer that whether it’s the NYPD or the Peekskill Police Department or the New York State Police, I’ve always dealt with very well trained, very committed public servants who I have nothing but the highest respect for.

With the prosecutions of Governors Blagojevich [Illinois], McDonnell [Virginia], and Perry for what the national press have not entirely excused but maybe written off as politics-as-usual, did you ever feel at all reluctant to act for personal legal considerations during your public service, or do you now in the current campaign finance legal climate feel yourself tiptoeing around the law?

No, no. You just don’t do that. You do what you think is right and you have competent counsel who advise you and hopefully constantly make sure that the actions you are taking are within the scope of your authority.

One of the new laws or proposals that I’ve heard you talking about is the notion of a congressional lobbyist ban Day 1. Is that something that you would effect by legislation, and what perhaps would be the teeth to enforce that?

Yeah, I think that is one of the most important reforms that we can have. Right now there are over 400 former members of the House and Senate who are lobbyists.

We have just seen Washington become a government far more of the politicians and the interests than of the people, and we’ve got to take it back for the people. Part of that is because you get elected – either party, from any part of the country – you know that within six months, you play the game, and you can make a lot more as someone who has influence and contacts in Washington after your elected career than you could by going back home. It just becomes a terrible system. It’s changed dramatically over the course of the last thirty years. That wasn’t the case in the ’70s; it is the case now.

I think one of the most important reforms would be: you serve one day in the House, one day in the Senate, there is a lifetime ban on your ever being a lobbyist in Washington. I think that should be a federal law. It should be passed by Congress. And I would love to see a member of the House or the Senate say, “Well I’m opposed to that, because when my career is over I want to preserve the option of being a lobbyist.” I think there would be enormous public support for it, and it would be extremely difficult for Congress to hide on an issue like that.

For consequences, what kind of fines or imprisonment do you think would be appropriate?

Oh I don’t know. I think you make it illegal and you have the appropriate sanction, whatever that might be.
Do you have a message to the New Hampshire law enforcement community, including aspiring criminal justice professionals?

Well certainly I don’t think there’s any more honorable profession than people who put their lives on the line to protect our freedom—whether it’s overseas or on the streets of New Hampshire. We have a government of laws. But those laws are only effective so long as we have brave people like our police who are willing to risk their lives to enforce those laws and to go after those who have broken those laws. So I’m just very proud of them, very proud to have worked with so many professional members of law enforcement.

And I would hope that the criminal justice faculty side would understand that it’s not a question of finding a brilliant loophole to a common-sense solution. It’s rather implementing a common-sense solution in a legally appropriate way. When I was governor, the courts had just come up with so many absurd evidentiary loopholes that it was very hard to convict someone even when it was obvious that they were guilty. One of the many major fights we had in passing over a hundred different laws was changing some of the absurd junk-justice rulings of a very liberal court that tied the hands of law enforcement and allowed people who everyone knew were guilty to get loose on a technicality.

(Alex Talcott, J.D., is a Faculty Team Lead for Criminal Justice at Southern New Hampshire University, the fastest growing department at the fastest growing college in America, where he also teaches business law. This interview originally appeared at NHJournal.com.)