By ValleyPatriot on November 28, 2014Comments Off on After Defeat, Lantigua Plans Beacon Hill Agenda (Satire) 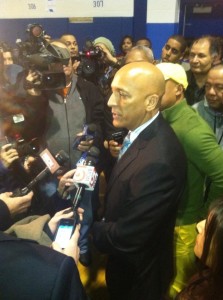 In the days following this year’s elections, former Lawrence Mayor Willie Lantigua has been preparing to take the oath of office as Lawrence’s new State Representative in January. He lost to Marcos Devers by over 400 votes but is looking forward to enacting his agenda on Beacon Hill.

“I am excited to build a partnership with our new Governor, Martha Coakley,” Lantigua said.

“Together, we will fight to make sure that every person who lives here illegally can vote for me in next year’s mayoral election.”

Lantigua is already packing his belongings into boxes and has reserved a moving truck to help him transport everything to his new office. Marcos Devers, the man who defeated Lantigua in the election, is not surprised at all by Lantigua’s actions.

“I can remember how difficult it was for Dan Rivera to try to move in to the Corner Office when Willie refused to get out of the chair,” Devers said. “I’m not going anywhere. The voters chose me to be their State Representative,” the victorious Devers proclaimed.

For his part, Lantigua is not letting go of the fact that his intention is to be the new State Representative. “I honestly could care less what the voters said in the election. I do care about what the two-thirds of people who didn’t vote think,” said Lantigua. “I listen to the voice of all the people of Lawrence, not just the people who voted.” When asked what he thinks his agenda will be, Lantigua responded: “Tomorrow, I am going to file papers to run for Mayor of Lawrence again. The people of Lawrence want me to be their State Representative AND Mayor.”

Although Lantigua has yet to offer few specific details about other aspects of his agenda, he did announce his intention to appropriate money for Lawrence to purchase a new garbage truck. He also plans to open a district office in the City of Tenares.