By Alex Talcott on August 3, 2015Comments Off on An Interview with Gov. Jim Gilmore Homeland Security in the Hometown of a Flying Ace PART II 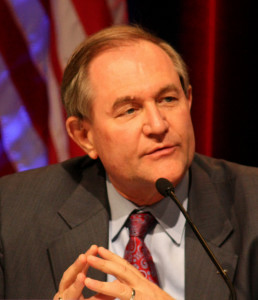 Well I hold a security clearance myself. …We have the best system in place right now to try to preserve our secrets. We have the best possible system we can have. You have to understand the two principles of national security. One is only a certain number of people who are cleared can even have the right to have access, and even they don’t get it. The only thing they get is what they have a need to know.

Related question: FISA courts, what facts do people need to know about what they are before they get an opinion about whether they like them or not?

I think we are entitled to know in the clear what the conduct of the FISA courts is. If the FISA courts are issuing warrants inappropriately – without due process, without probable cause, just because they can go along easier behind closed doors without oversight – that would be wrong. I place a burden, especially on the Congress – the administration too – but the Congress, they have a duty of oversight that I think they’re not doing. And I think it’s because after the 9/11 attack I think there has been such a desire to tilt on the side of security that we’re not doing property oversight. I think liberties demand that our elected officials do proper oversight and explain to the American people that they are. And if they’re not doing it right, they ought not be reelected.

A fellow Virginia governor, Thomas Jefferson, admitted the Louisiana Purchase was a “deed beyond the Constitution.” What do you think about executive power, and limits to it?

I believe in the Constitution. I think that the president can’t just simply do anything that he wants to do and then rely upon a political majority in the Senate to protect him through a filibuster. Imagine on this immigration issue – even though it’s a very thorny problem, and I don’t have all the answers on that – but imagine all the arguments that we’ve been going through for years and years and years on the immigration issue. How silly of us! Who knew that all we had to do was have the president just issue an executive order and it was all resolved? Well we know that’s not true.

…[A]s [Virginia’s] Attorney General [1998-2002], you investigated church burnings….
I’m very proud of that. As attorney general, we had a situation in this country where suddenly there was a rising up of the attacks on African-American churches…and the more it was let alone and nobody spoke with anybody about it, the more it happened, until copycats were going on and you suddenly began to see something like that going on all the time. I was the attorney general and I thought I could do something about it. I was from Virginia, and we have a very large African-American community in Virginia. I thought they were entitled to some public leadership.
So I called all the attorneys general from across States, Republicans and Democrats, into a conference at Howard University in Washington. I asked Doug Wilder, the former governor…an African-American, to come into the conference, and we basically set down the rule and said anybody that does this is going to be prosecuted to the fullest extent of the law. It was a strong public statement. And the church burnings stopped.

As a prosecutor, supervising prosecutions of thousands of felony cases [Henrico County, Va., 1988-1994], anything that shouldn’t be a felony in retrospect? Things that should have been peeled back?

Too broad a question. There may be some things that shouldn’t be felonies and I think that we’re entitled to a public discussion about that. But I believe in the criminal justice system of the United States. I don’t think there’s anything better. I don’t believe in lynch mobs. I don’t believe in the press deciding who’s innocent and who’s guilty. I believe that it’s proper to have a true trial where you go through an excruciating process – and believe me, you do – you have to have probable cause. The Constitution, the Bill of Rights actually applies here, in the Fourth, Fifth, and Sixth Amendments. And I’ve litigated on both sides of the aisle, as defense and prosecution. The courts have got to adhere to the Constitution. And they do. They do.

You have to have probable cause to get a warrant. You have to have a grand jury. Why? Grand juries don’t do anything, right? But if you didn’t have them, then you would not have that extra protection in there of citizens who would recognize a fraud or an abuse when they see it. And therefore the prosecutors don’t abuse.

What are some worthwhile reforms that you have learned of through the Free Congress Foundation [Gilmore is president & CEO] when it comes to public safety? [The Foundation’s website references a Healthy Communities Initiative with core urban issues of transit, education, city services, public safety, and pension reform.]

Our focus has been on the economy and national security. It’s my personal experience as defense counsel, prosecutor, and attorney general that gives me that experience. My belief is that the system is just, comes out right, and that there’s plenty of discretion in the system—on motions, on prosecutors, on clemency. There’s plenty on prosecutorial discretion: to either bring a case or not bring a case. All those kinds of things actually put checks and balances into the system.
Other board service: the NRA board, life membership. What does that entail?

The board’s there to provide guidance on the national organization. It’s an organization – I believe it’s an organization – that stands up for the Second Amendment. …I believe in the Second Amendment because it empowers people. It’s a statement that says that you can trust individual citizens to be responsible with firearms. And that’s an empowerment thing for people. It’s a sense of a reaffirmation of liberty of the people, and that’s what the Founding Fathers had in mind. And I think we should hold on to it and we should preserve it.

If you’re a young person or adult who wants to self-educate a bit on foreign affairs and are the kind of person who doesn’t know ISIL from an iPhone, where should someone start? What should they be reading?

Postscript; the last paragraph of Barbara Tuchman’s Guns of August (1962):

“After the Marne the war grew and spread until it drew in the nations of both hemispheres and entangled them in a pattern of world conflict no peace treaty could dissolve. The Battle of the Marne was one of the decisive battles of the world not because it determined that Germany would ultimately lose or the Allies ultimately win the war but because it determined that the war would go on. There was no looking back, Joffre told the soldiers on the eve. Afterward there was no turning back. The nations were caught in a trap made during the first thirty days out of battles that failed to be decisive, a trap from which there was, and has been, no exit.”