By jniewicki on November 6, 2004Comments Off on An Interview with Methuen Mayor Sharon Pollard

What does being mayor have to do with ed 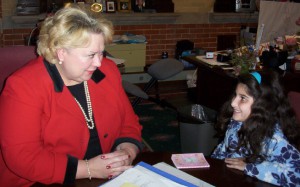 The mayor of Methuen is chairman of the School Committee. It’s not like that in every city, but it is in Methuen. The Superintendent of Schools runs the day to day operations, but, the School Committee is responsible for the budget, which is the money we spend on schools. The budget determines how many teachers there are, what kinds of school books you have, which school books, writing materials, and the subjects we are going to teach.  And that’s very important because all of those things have a big impact on how we educate young people.

In the last year, I think Angels and Demons and the DaVinci Code. Right now I am reading a book about John Adams by David McCullum.

What do you think about MCAS?

I have a divided opinion of MCAS. I think  it is  a very good thing for us to be testing students and then working hard to educate them better. My only problem is that we are teaching to the test. So we are probably not giving children the well rounded education they should have. But, standards are good. I just wish there was a different way we could do it.

What a great question! I don’t think we use calculators. It has never come up as an issue in Methuen. I know my preference would be, in the early years, using calculators is a terrible idea because you can’t learn the basics of math. The experience I have had in my family is that the kids seem to rely on calculators instead of memorizing their times tables. In the lower grades, I am totally against using calculators. We were better served with the fundamentals of memorizing and doing math in our heads. There are so many kids who can’t even make change today and I think that’s part of the reason. They are not getting the fundamentals.

Did you go to public schools?

I went to public schools from grades one through eight. I went to this school, right here. My school was in this building where we are doing this interview. (in the Searls building.) You could say I never left.

Lawrence Superintendent Wilfredo Laboy says “No Child Left Behind” is working. Is it working in Methuen?

I think it is the same every place. We are struggling a little with the program because, on the whole, Methuen has met the standards well. But there are certain categories of students who do not. That hurts the entire school. The problem with government is that in many cases they mandate local cities do things but don’t provide the funds. I think they should offer us assistance to meet the goals they set.

Have you heard of peer mediation and if so, what do you think of it?

Oh sure! I know what it is. I think it is a wonderful idea. Children helping children is a good idea. When you have an idea like older children helping others to understand their problems, it’s always a good thing as long as they are informing the parents. I don’t think parents should be left out of the equation though.

Do you spend a lot of time on education?

I do because it’s an important part of my job. I always say I will be judged on the work that I do in the schools. Did we solve some of the major problems here when I arrived? I think we did. I do like to talk to a lot of kids about the importance of voting and being responsible in school. I also spend a lot of time on School Committee issues that I talked about before. I think it is really the most important part of my job, talking to kids.

Is it fun being mayor and being on the School Committee?

Should good teachers be paid the same as bad teachers?

Who would you like to see as the next Mayor of Methuen?

I think that Billy Manzi will make a great mayor and I am supporting him for mayor. He has been a good council president and he will be a good mayor. I am sure of it.

Most days I do. Some days are very frustrating and you say ‘why did I run for this job?’ But as long as you are doing positive things for people I think that’s what the job is all about.   Are you going to miss being mayor?   Oh, I am sure I will. Some days I won’t, like when I can go on vacation and not have to answer the phone. Or when I don’t have to call the office three times a day.

Why did you run for mayor?

I thought the former mayor had done a pretty good job as mayor and I thought he dealt with some of the problems in Methuen really well. But, Methuen was filled with cronyism. You know, there were a lot of people who were not honest in government,   who were giving jobs or doing favors for people just because they were friends. And I looked at the choices of the people who were running for mayor and I decided to run because I knew I could do a better job than the field of candidates that had declared.

What was your biggest accomplishment as mayor?

Well, I think the community is a better place for people to live and the people of Methuen feel better about saying they live in Methuen than they use to. The city government is professional now and we engage in meaningful debate without screaming and yelling and all that foolishness. We try to provide good services; the taxes are reasonable; we balance our budget without putting a burden on the community. Methuen is a great place to live and I think people are now really proud to say that. Oh, and we have a fabulous state park now.

What was your biggest problem to solve as the mayor?

Some days it’s not really a problem, but some days it is really hard to please people. I try to do a lot of work on the city’s infrastructure, fixing roads and bridges to make sure the city is safe. People complain about things all the time, but sometimes there are problems you can’t solve in a few years. But you can make a contribution towards solving some of them. I would like for every child in Methuen to be doing well and get a great education, but I don’t think you can ever accomplish that completely. A lot of children have problems at home and you can’t do everything for them, so we do our best.

An Interview with Methuen Mayor Sharon Pollard added by jniewicki on November 6, 2004
View all posts by jniewicki →