By Dani Langevin on November 20, 2013Comments Off on Are We Asking too Much of Teachers and Students? – Ye Gay Ol’ Valley 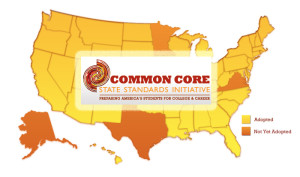 This is the mission statement of the Common Core Standards (CCS) that has been adopted by the Massachusetts Department of Education. “The Common Core State Standards provide a consistent, clear understanding of what students are expected to learn, so teachers and parents know what they need to do to help them. The standards are designed to be robust and relevant to the real world, reflecting the knowledge and skills that our young people need for success in college and careers. With American students fully prepared for the future, our communities will be best positioned to compete successfully in the global economy.”

The standards sound wonderfully ambitious, appropriately rigorous and yet written in a way that any parent could clearly understand them and be able to assist teachers in helping their children achieve each and every one of them by the end of the school year. The state, however, is under the delusion that all parents are actively involved in their children’s education. I highly doubt that most parents have actually taken a look the standards. Let’s survey some of them now.

This is standard 3a for grade 8 language: Use verbs in the active and passive voice in the conditional and subjunctive mood to achieve particular effects in language. Here are standard 4 for grade 8 math functions: Construct a function to model a linear relationship between two quantities. Determine the rate of change and initial value of the function from a description of a relationship from two (x,y) values, including reading these from a table from a graph. (This isn’t even the complete standard. It goes on). A first grade literacy standard reads: Produce and expand complete simple and compound declarative, interrogative, imperative, and exclamatory sentences in response to prompts. This is a second grade math standard: Determine whether a group of objects (up to 20) has an odd or even number of members, e.g., by pairing objects or counting them by 2s; write an equation to express an even number as a sum of two equal addends. And for good measure, a sixth grade math content standard: Understand that a set of data collected to answer a statistical question has a distribution which can be described by its center, spread, and overall shape.

These are only a few of the hundreds of CCS that the average student needs to master at the end of every school year. When teachers are working on certain standards, they are to be displayed in the classroom for students to refer to so that they are aware of what it is they are expected to master.

Every teacher has to be familiar with every standard in every subject they teach. However, there is only CCS for math and language arts. For lower school teachers, they need to know the standards for both of these subjects because they teach all academics (math, language arts, science and history) of which they must be highly qualified to teach. For those teachers who only teach history, they are required to know the standards for language arts as applicable to their subject. Science teachers need to know them for language arts and math as applicable to the subject of science. This is no small task since there has been no training on the CCS. It must be done on their own time.

Along with adopting the CCS, Massachusetts has also adopted a new evaluative tool for teachers. Teachers have to create goals for themselves and their students. These goals are both individual by teacher and/or by teaching team. Everything is based on evidence of student learning. Some of these goals are known as S.M.A.R.T. goals. Meaning the goals are Specific and Strategic, Measurable, Action oriented, Rigorous and Realistic, and Time tracked. In essence, every teacher in every school in every district will need to show evidence of improvement on every student. This is above the tracking and assessments every teacher has been practicing since entering the classroom. On top of the state mandated assessments on reading, writing, and math and along with the MCAS exams, teachers must collect more data and more evidence to prove every student’s growth. Teachers have to look at data from previous years to determine weaknesses, devise and formulate an action plan with measured results, collect data and pray to the teaching gods that the students show improvement by the end of the year and have mastered every single Common Core Standard. Coupled with that is every teacher’s self-evaluation which involves measuring and assessing what they did throughout the year that either supported or hindered every student’s individual growth.

On the student’s end, they have to pass the MCAS which has been forcefully spoon fed to them since its inception, or they can’t graduate. They must show that they are consistently improving academically by having a certain personal growth percentile and now familiarize themselves with the hundreds of Common Core Standards in both math and language arts for their grade level, and master each and every one.

The documentation of it all is daunting and exhausting. No extra planning time has been given along with these extra tasks, which cuts into the time teachers need to plan actual lessons. The only training that is being received is how to fill out the paper work, not how to implement the program. First year teachers have the same expectations as twenty year veterans. There are no interns, residents or fellows. You’re out of the gate at the same pace no matter what your experience. The anxiety and tension in schools across the state is palpable. Teachers are told that, “Everyone feels the way you do.

We’re all in the same boat.” These words are about as comforting to teachers as they would be if uttered to the victims of the Titanic. Even though everyone feels like they are drowning, the fact is they’re drowning. The pressure is on and it’s heavy. Teachers feel like the Salem witches that were crushed by thousands of pounds of solid rock. The message is clear: ask for more weight or get out. No doubt this pressure will trickle down to the ever growing demands of our twenty first century students.