By ValleyPatriot on November 5, 20215 Comments 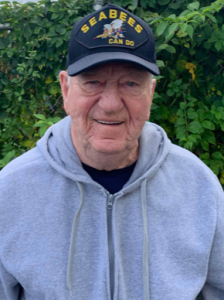 Lawrence native Arthur Goulet attended St Anne’s Grammar School and graduated from Lawrence High School with the Class of 1955. Shortly after finishing high school, he joined the US Navy. He completed Military Basic Training at the U.S. Navy Training Center at Port Deposit, Maryland, more commonly known in the fleet then, as United States Naval Training Center Bainbridge. The center closed in 1976.

During our interview at the Sunnyside Diner, on Broadway in Lawrence, a few blocks from the now closed Franco American Veterans Post 1, of which Arthur is a former Post Commander, Arthur recounts his “frigid” travels with the US Navy. Arthur’s service to our Nation took him to Naval Station Argentia Newfoundland, US Air Force Base Thule Air Base Greenland, where he was assigned to Camp Century and Camp Tuto, which was operated by the US Army. He was also assigned to Fort Wainwright Alaska, near Fairbanks, Alaska. Arthur’s coldest tour was Operation Deep Freeze at McMurdo Station, Antarctica.

Arthur also served at Naval Base Guantanamo Bay, Cuba during the height of the “Cold War”, giving him a firsthand look at the unfolding of events now known as the Cuban Missile Crisis. He was on site when the US Naval Base Commander closed travel off to and from Cuba. This happened during the tail end of the Cuban Revolution, Communist forces captured twenty-nine US Navy sailors who were on liberty in the two towns outside the Naval Base.

The sailors were taken prisoner on June 27, 1958, by rebel soldiers, led by Raúl Castro, brother of revolutionary leader Fidel Castro. The last of the sailors was released on July 18, 1958. US Navy leadership, then placed all Cuban territory outside of the base fence line, as off-limits to U.S. personnel, the Commanding Officer issuing the order on January 1, 1959, this was the same day that the Cuban government of Fulgencio Batista collapsed.

One of the more interesting stories he told me was about being “stranded” in Christ Church, New Zealand, with another sailor for around a month. He was assigned to McMurdo station, awaiting travel orders, and he and the other sailor were billeted in an apartment with a shared car. With no assigned military duties, they simply checked in with the US Navy once a day, spending the rest of their time wandering around town. Arthur found a pub full of “locals”, off the beaten path, outside of the tourist areas, and bought “a round of drinks” for the locals. In this hole in the wall pub, he noticed that the local women were not allowed by either law or custom, to sit at the bar.

All the young, (and old) ladies in the pub sat at tables throughout, but never at the bar itself. He recalls walking the main streets of Christ Church, and seeing people watching televisions through store windows. Arthur recalled seeing people do the same on Essex Street in Lawrence during his youth. 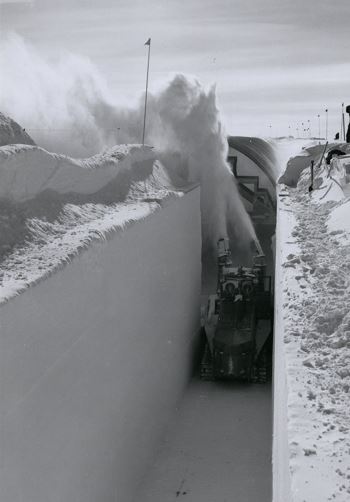 While on Antarctica, one of the many pieces of construction equipment Arthur operated was the Peter Snow Miller. The Peter Snow Miller was used to dig tunnels for the construction of the new Byrd Station, during Operation Deep Freeze in the late 1950s and early 1960s. Arthur and the Seabees were trained in using the Peter Snow Miller, in Alaska, prior to being sent to Antarctica, the machine was essentially a Swiss snowplow originally used to clear roads in the Alps. Arthur and the Seabees went to work and used the machine to process the snow and work it up to the firmness necessary to support building construction on Antarctica. This machine also did double-duty, used by the Seabees in cutting a trench for utility and sewage lines.

Arthur’s Naval Mobile Construction Battalion Twenty-Seven detachment was based at the US Military Reserve Center in Lawrence, now the site of Lawrence High School in South Lawrence. He remembers vividly, lining up with hundreds of reservists, from all branches of the US Military, to search woods surrounding the center for a Lawrence youth, Andy Puglisi, who disappeared from the public pool that was located behind the Reserve Center on August 21, 1976. Arthur recalled that Andy’s dad was a reservist himself.

While serving in the US Navy Reserves, Arthur also worked as a motor grader operator and dump truck driver for LD Boddy, where he built roads into the Bellevue Cemetery and worked on the construction of Route 495, part of the Eisenhower Interstate System. Later in his career, he worked as a switcher operator at Malden Mills, moving trailers throughout the complex. A very young eighty-two years old, Arthur is still active in the local Veterans community, Arthur and a fellow US Navy Seabee from Dracut, Massachusetts, Bob Berube, often attend “mini-reunions” of the servicemen who served in Antarctica together.

He fondly remembers the vibrant French-Canadian culture that existed in Lawrence during the 1950s, 1960s and 1970s. A culture based at St Ann’s and Sacred Heart Churches, with culture events at the French Social Club, the Franco-American Veterans Post, and the LaSalle Club. Arthur and his wife Irene have been married fifty-six years, getting married at Irene’s mostly Irish St. Mary’s Church. The couple has a son and a daughter, both of which attended Lawrence High and played in the school band. Irene and Arthur now have four grandchildren.

Arthur dedicated thirty years of his life to service to our Nation, in the US Navy Seabees, and fifty-six years (and counting) to his wife and family, truly making him, a “hero in our midst”.

John Cuddy served in the US Navy’s Construction Battalions (also known as the Seabees) after retiring from the US Navy; he earned a bachelor’s in history and a master’s in economics from the University of Massachusetts on the Lowell Campus. He has been employed in Logistics at FedEx for the last 25 years. If you know a World War II, Korean War, or Vietnam War, Veteran who would like their story told, please email him at John.Cuddy@Yahoo.com. ◊

5 Responses to "Arthur Goulet, Cold Weather Seabee! ~ VALLEY PATRIOT OF THE MONTH – HERO IN OUR MIDST"