By Tom Duggan on September 7, 2010Comments Off on Bank Robber Suicide 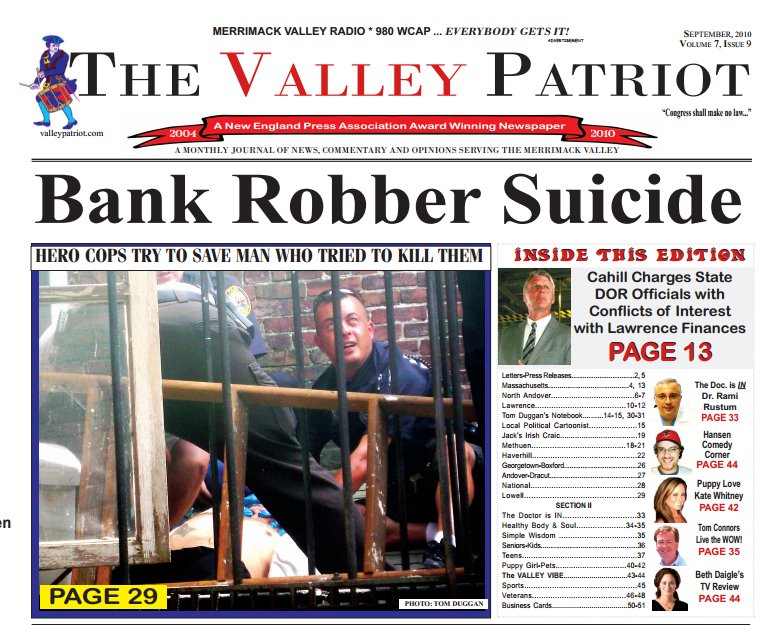 Last month, a man walked into a downtown bank in Lowell brandishing a weapon and took the bank occupants hostage as he filled a bag full of other people’s money.

He willingly and wantonly violated the lives of every single person he had come into contact with from the minute he entered that bank.

And as he tried to get away, the brave men of the Lowell Police Department sprung into action, and descended upon the bank to protect those very bank employees and patrons who had done nothing to deserve the hell this cretin had just exposed them to.

That’s when he began shooting at police as he ran through the streets, and put the lives of everyone around him in danger; men, women, children, and in particular the police officers who were responding to the silent alarm.

It was a bright Saturday afternoon around 1pm in the middle of August and because it was the weekend of a sales tax holiday in Massachusetts, the streets of downtown Lowell were crowded with shoppers as the end of summer drew near.

Dodging bullets, Lowell Police Officers chased this guy through the streets, around civilians, and made their way through traffic as he ran towards the alleyway behind Central Street. Eventually, the man ran up the fire escape of the WCAP building where swat teams, armed with automatic weapons cornered him like a caged rat, directly at eye level from the office windows of 980AM WCAP radio.

The police had no idea I was there, just two or three feet from where this man had made his final stand. AS far as they knew they were in a secluded alley, surrounded by fellow officers who had moved members of the public away from the action.

I had just finished doing my radio show and seeing the Lowell Swat Team climbing slowly up the fire escape towards the well dressed man, he did what every bank robber faced with that situation should do… instead of shooting at police, instead of trying to negotiate, he did society the biggest favor anyone in that position could do for his fellow man …. he turned the gun on himself and put a bullet in his own head.

Now, I know that sounds harsh to those who are naïve to the reality of street violence that police officers deal with every day. But, just think of the burden to society this selfish S.O.B. spared all of us by turning the gun on himself instead of someone else.

What was most remarkable though, was watching with my own eyes as these same Lowell Police Officers (whom he had tried to kill just seconds before) sprung into action again and immediately begin performing CPR on their own would be killer.

It takes a special human being to do that. I mean, these guys didn’t just make a half hearted attempt on the seemingly isolated fire escape of the WCAP building where they thought nobody was watching. They spent every ounce of energy they had to try and save him and even brought him back to life at least twice.

Just imagine. A man shoots at you and makes every attempt to make sure your family never sees you again, and the minute he tried to take his own life, you put all of that aside and instinctively leap to his defense and provide him medical treatment.

As blood ran down the side of the roof and into the alleyway next to the station, these heroic medics and police offices collected the bag filled with other people’s money, put him on a back board and lowered him down to a waiting ambulance.

Now just imagine the treatment these officers would have received by the press, the courts and even members of the public had they shot and killed this guy in self defense. Imagine the Monday morning quarterbacks who would be calling for internal investigations, and judging the cops guilty form the get go. Their lives would have been turned upside down and maybe even faced jail time for simply doing their jobs, for just doing what they were trained to do… because they wear a badge and a gun.

Yes, as difficult as it was to watch all this, I couldn’t help but sigh in relief when I learned that the bank robber who shot at these cops on a busy downtown Lowell street had died from his own hand.

The anguish these hero officers were spared by that very act alone is immeasurable. By taking his own life he spared the witnesses from enduring a long drawn out trial, time out of work and even their own actions and motives being called into question.

Think of the expense alone that we will not have to be burdened with now that he is gone.

No free lawyers, paid for by the taxpayers. No endless hearings and trials where we pay for the prosecutor, the judges, and the court officers. Had he lived we all know that this animal would be coddled with free food, clothing, shelter, cable TV, a weight room, and most likely psychological and drug and alcohol treatment.

By the time this guy even mad it to trial (if he even made it that far in our liberal court system) hundreds of thousands of dollars better spent on services for law abiding citizens would have been wasted.

Instead, no book deals. No appearances on talk shows. No blaming his childhood because he didn’t get a Cap’n Crunch decoder spy ring wen he was a kid. And even more importantly, he will never, ever terrorize another human being again … not in jail, not on furlough, not on work release and not walking the streets after some ivory tower liberal parole board lets him out.

The heroes of the Lowell Police Department deserve a medal for what they did last month on that fire escape. They showed what dedicated professionals they truly are by keeping the public safe, reacting as they were trained and putting aside their personal feelings to do what we hired them to do … protect and serve.

Overall, despite the myriad of possible catastrophe scenarios that could have resulted from the actions of this animal, it turned out to be a pretty good day for the people of the Commonwealth of Massachusetts.