By Tom Duggan on February 3, 2018Comments Off on BG PECK in Lawrence Brings State of the Art Metal Stamping to a Whole New Level 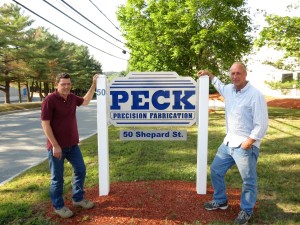 If you’ve driven through the industrial park in Lawrence and happen to travel Shepard Street you’ve probably driven by BG Peck Industries without ever realizing it.

“We are on the curve of Shepard so you really don’t even see the building unless you are looking for it,” says Mike Holdsworth. “Chances are though,” Holdsworth continues, “you probably have a BG Peck product in your home.”
Peck Industries makes a variety of gaskets and sealants for just about every kind of machine, sign, or car component you can think of.

“You know the backlight on the numbers on they keypad for your alarm system or your car door? That’s what we make, the gaskets that seal them and make them water proof.”

Peck even makes custom made gaskets for heavy machinery, auto engines and parts, and though they have large national and international contracts, they also work with local autobody and car repair shops to make custom fit parts for hard to find models.

Peck is Veteran owned and operated.

Here are some of the other things Lawrence’s Peck Industries manufactures.

Metal stamping and stamping dies are used in presses that produce up to 80 tons of pressure to produce high volume sheet metal parts. Parts can be stamped from any ductile metal to create and achieve almost any desired configuration.

In many cases even secondary operations such as tapping and assembly can be accomplished within the confines of the die set.

Metal stamping is generally performed on materials .020″to .080″ thick with tolerances to ± 001. The process also can be applied to foils as thin as .001″ or to plate stock with thickness approaching 1.000″.

Multi-station dies are arranged so that a series of sequential operations are accomplished with each press stroke.

With progressive dies, coil stock is fed into the press. Individual stampings are connected with a carrier strip as they progress through the various die operations and are ultimately separated and then discharged from the press.

The most common types of dies perform cutting and forming. Cutting dies are used to shear sheet material into what is called a blank. These blanks are then exposed to blanking dies that cut the entire perimeter of the part, or to forming dies where the blank is shaped into a part. Cutting dies are also used to trim excess metal from around a formed part. Punching is literally pushing or punching a “punch” through the blank to form a hole or slot.

Forming is a general term used to describe a stamped part whose shape and contour is usually reproduced usually through multiple operations within the dies set to produce the desired configuration.

The major forming operations accomplished with press-mounted dies are:
Drawing, or draw forming, involves forcing a blank deeply into a die cavity and shaping it into the shape and contour of the punch and dies faces and sides. Without sufficient formability qualities, drawn blanks are subject to folding, thinning, and fracturing.

Bending is a relatively simple forming operation that provides rigidity and shape to sheet metal parts. Flanging is a form of bending that produces a flange. A flange is differentiated from other bends because the resulting bent materials is significantly smaller in dimension than the rest of the part.
The functions of a flange include:

Hemming is the folding over of a short flange upon itself to form a smooth, rounded edge and to facilitate the attachment of mating parts. Multiple stamping operations may be performed within a single die, or at a number of die stations within a die set and with a single stroke of the press. Single station dies can be either compound dies or combination dies. A compound die performs basic cutting operations such as blanking and hole punching to produce parts. Combination dies combine shaping and forming functions with cutting operation(s) to manufacture parts.

An important factor in die design is clearance. punching holes and other cutting operations require specific and carefully maintained clearances between the punch (male component) and the die (female component). The setting of the required clearances is determined by both the stock thickness and temper. In general, die clearances increase as the stock thickness increases. The depth of punch penetration into the sheet metal stock will also increase as softer stock is used.

The ability to 3D model has taken much of the art out of die design but not all of it. The dynamics of stamping can never eliminate the experience a highly skilled tool designer can bring to the table. One tool that is frequently used to help understand these dynamics is called “Circle Grid Analysis”, or CGA.

The application of CGA involves the etching of a pattern of small circles on the surface of the blank. This pattern deforms along with the blank as it is formed, providing point-to-point calculations of the deformation that occurred.

nalyzing this stamped grid pattern suggests the location and type of rework that must be performed on the dies to produce easily manufactured parts. The CGA process is repeated on the die until an acceptable part is produced.

BG PECK in Lawrence Brings State of the Art Metal Stamping to a Whole New Level added by Tom Duggan on February 3, 2018
View all posts by Tom Duggan →