By Tom Duggan on January 3, 2017Comments Off on BOOK REVIEW ~ THE NEW HARRY POTTER 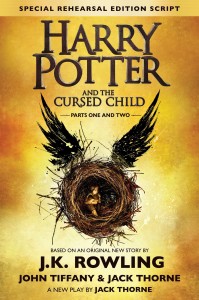 “Harry Potter and the Cursed Child Parts One and Two” Based on an Original New Story by J.K. Rowling. John Tiffany & Jack Thorne © Text 2016 by Harry Potter Theatrical Productions Limited, Harry Potter Publishing and Theatrical rights © J. K. Rowling, Published by: Arthur A. Levine Books an Imprint of Scholastic Inc. Hardcover: 327 pages includes: A section About the Production, Biographies of the Original Story Team, and Acknowledgements.

Genre: Fiction. Fantasy.
4.75 out of 5 Bookmarkers

Credits on all three individuals associated with this work are impressive. J.K. Rowling needs no introduction to those familiar with Harry Potter. John Tiffany is an award winning theatrical director. Jack Thorne, the winner of several television awards, also writes for theater, film, and radio. This eighth Potter book by J.K. Rowling was first performed on stage in London 30 July 2016.

The last Harry Potter novel ends with the Battle of Hogwarts. This wizard story picks up nineteen years later. People are married, children are born and these offspring are now at Platform Nine and Three Quarters on their way to Hogwarts to begin their studies much as their parents had done.

Harry and Ginny are the parents of three children. While one, Albus, is featured prominently in this story the other two, James and Lilly, are barely mentioned. I had to go back to the dust jacket to confirm there was more than one child. Maybe the other two children are slated for sequels.
Albus, Hermoine and Ron’s daughter, Rose and Draco Malfoy’s son, Scorpius become acquainted while on the train. They turn out to be major players in this tale.

The plot, through its characters, engages quickly. These new characters are as well developed as are the old established ones. Old favorites such as the brothers Weasley, Severus Snape, Hagrid, and of course the ultimate villain Voldemort, return. Familiar scenes resurface, The Sorting Hat, The Triwizard Tournament, and Moaning Myrtle in the girls’ bathroom. While the people and scenes are familiar they have a new twist.

Though this book is all about a magical world, the struggles facing the characters are believable. Fathers and the relationship to their sons are explored. Teenagers coming into their own sense of self battle feelings of isolation, love, and rejection. All the normal emotions facing normal teens are examined. And defiance. It is through defiance that the plot moves along.
The genius of J.K. Rowling is her ability to make the reader feel. Feel the wonder of magic. Feel the pain of isolation. Feel how it is to be different, to not fit in. Teen readers may even be able to get some insight into their own lives and issues plaguing it.

For those who want to get to the meat of the matter, whom said what to whom, a play is the perfect medium. There is no “The sun shone brilliantly through the amber and green colored leaves while the smoke from the old man’s Mescher pipe filtered through the partially bare branches.”
This four-act play is a fast read. Many of the scenes comprise only two pages. Even though this play is classified as a “Special Rehearsal Edition Script” stage descriptions are kept to a minimum. “Stage left” or “character moves downstage right” directions are limited. The reader is spared such obvious notations.

I love plays. Love reading them, love seeing them. My hope is that this book will do for plays what J.K. Rowling did for adolescent (and adult) non-readers (turned readers), which was to open minds up to new experiences and new vistas.

This is definitely something to put on one’s gift giving list.