By ValleyPatriot on October 15, 2013Comments Off on Broken Fountain a Symbol of Lawrence’s Leadership – Valley Patriot Editorial

In September of 2006 The Valley Patriot wrote an editorial calling out Lawrence DPW Director, Frank McCann and Lawrence Mayor Michael Sullivan for their failure to repair one of Lawrence’s most famous landmarks: The Vietnam Veterans’ Fountain located at the gateway to the city on Winthrop Avenue and South Union Streets.

Since then, Sullivan and McCann have come and gone, yet the once functioning fountain still sits crumbling in disrepair. In a way, the broken fountain is a symbol of how little Lawrence leaders really care about Veterans and the city they live in. Ironically, it’s also a symbol of Lawrence’s failed leadership at the hands of petty tyrants who care more about who gets credit than doing what is right for the city. 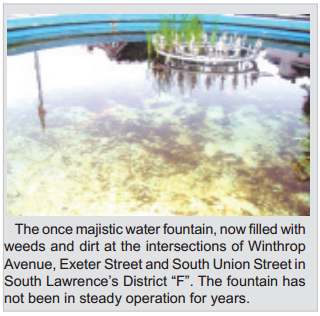 A few years ago Sal Lupoli of Sal’s Pizza, and City Councilor Roger Twomey put together a proposal where Lupoli would donate the labor and materials to fix up the fountain and once again honor the Vietnam Veterans with a beautiful water fountain more than 20 feet high, visible to all who enter the city from Andover or North Andover.

But Willie Lantigua and the Lawrence City Councilor refused that free help. Why? Because Lantigua wanted his name scrawled across the fountain and didn’t want anyone else to get credit for it.

So as you read this editorial, the broken fountain sits in disrepair with nobody’s name on it, not even the Veterans’ it is supposed to honor.

You would think with the $35 Million Lantigua borrowed (and didn’t use for cops and firefighters), or the hundreds of millions of dollars that have flowed into the city of Lawrence from the state and federal government that a few thousand dollars could have been set aside to beautify the city’s gateway.

Which is a great metaphor for The City of Lawrence. They both have at their disposal: a lot of potential, a ton of political resources, plenty of opportunity, hundreds of millions available and yet continued failure because of lack of honest leadership.

Lawrence City Councilor Marc LaPlante has tried year after year to get funding allocated to restore the fountain to its once heralded beauty.

But as long as the person calling all the shots is more interested in having his name on things than he is fixing problems, it’s never going to happen.

We never could have imagined when we wrote our editorial in 2006 that we would still be writing about the fountain in 2013.

But, then again, we never could have imagined Lawrence getting any worse than it was in 2006.

Yet here we are.