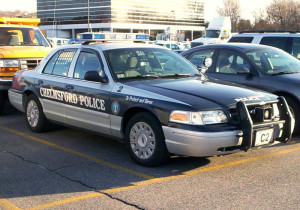 CHELMSFORD – Police Chief James M. Spinney reports that an intensive investigation by the Chelmsford Police Department, with the invaluable assistance of the Lowell Police Department and Massachusetts State Police, has resulted in the recovery of a shotgun stolen during the theft of an unmarked police cruiser from the home of a police officer.

The missing shotgun was located in Lowell. The investigation into the facts and circumstances of this incident remains ongoing. Chief Spinney also wishes to apologize for his choice of wording yesterday when responding to a question from the news media about the location of the missing shotgun. The chief said something to the effect of “For all I know it could be in Lawrence.”

Chief Spinney’s answer was only intended to convey distance from Chelmsford and was not intended to be a slight against the City of Lawrence. He understands that he used a poor choice of words.

“I sincerely apologize to the residents of the City of Lawrence. Please know that while I understand that my choice of words was wrong, I did not intend to offend anyone or speak poorly of the City. I was only trying to comment that the missing firearm may be miles away from Chelmsford for all we knew, that early in the investigation,”

Chief Spinney said. “I have also been in contact with Lawrence Police Chief James Fitzpatrick this morning to convey the same sentiment, and I asked him to share my apology with Mayor Dan Rivera,. I have also reached out to City Council President Kendrys Vasquez.” Sometime overnight from Wednesday into Thursday, thieves broke into the garage of a Chelmsford police detective and stole several sets of keys from inside.

The thieves then stole a 2011 Ford Taurus unmarked police cruiser and a Saturn wagon from the detective’s driveway. The Saturn was found a short distance away from the detective’s home, and police found the Taurus at approximately 9 a.m. Thursday on Bowden Street in Lowell, near the Lowell-Chelmsford border.

However, the shotgun was not inside, and it became the subject of a high priority police investigation. The incident remains under investigation.