By Christine Morabito on November 3, 20132 Comments 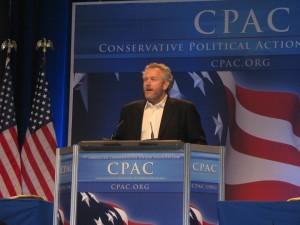 On September 16, 2011, conservative activist and whistleblower, Andrew Breitbart visited Lexington, Massachusetts. Little did we know how significant that visit would become. Andrew was a hero because he was completely unafraid and committed to exposing a biased media, challenging corrupt government officials and the corrupt government programs they champion.

Breitbart, a former liberal, best known for uncovering the ACORN scandals and “exposing” Anthony Weiner’s sexting escapades, feared nothing and no one. And that was exactly what Americans needed in this time of out-of-control political correctness.

On the morning of March 1, 2012, we received the devastating news that Andrew Breitbart was dead. He was only 43.

The spirit of Breitbart lives on, in groups like the Tea Party that are passionate about, informing average citizens of the corruption they would never otherwise hear about and encouraging folks to get more involved in their communities. We can no longer afford to sit by and wait for the government or the mainstream media to fully inform the public about what is going on behind closed doors.

For the past several years, conservatives have been extremely effective in getting their message out by “becoming the media,” via alternative outlets, such as blog sites, Twitter, Facebook and other forms of social media.

But we need more watchdogs out there to ensure that people are getting the truth, and can therefore make informed decisions about how they are to be represented. That is why the Greater Boston Tea Party is partnering with the Massachusetts Liberty Movement and the Franklin Center for Government and Public Integrity, for our Second Annual Citizen Watchdog Training, where you will learn to hold your elected officials accountable and set this country on a better path for future generations.

Please join us on Saturday, November 16 from 9 to 5 in Worcester, MA, as we provide a full day of in-depth training to equip you with the tools and skills to become a more effective activist.

Jeff Kuhner, WRKO radio host and columnist for the Washington Times, has graciously agreed to be our keynote speaker. Kuhner was a rock star when he spoke at our Tax Day Rally on the Boston Common earlier this year.

We will be joined by some of the leading experts in information activism and investigative reporting. You will hear from a panel of legislators and public policy experts, including Paul Craney of Massachusetts Fiscal Alliance and State Representatives, Marc Lombardo and Matt Beaton. They will discuss the successful effort to repeal the technology tax and other current legislation being considered on Beacon Hill.

You will be inspired by area activists who walk the walk, with a panel including Stephanie M. Davis, blogger and radio host, Clare Donegan, who is leading the fight against Smart Meters, activist and blogger Jim Ettwein, and John Niewicki who represents the region’s Right to Refuse Amendment.

Chris McCoy and Adam Ulbricht from the Franklin Center will be on hand to demonstrate social media techniques and the power of citizen activism.

Unbeknownst to many taxpayers, our new gas tax is now tied to inflation, which means it will continue to increase without our cowardly legislators ever having to vote to increase it again. That is why we affectionately call it the tax to infinity and beyond. Activist, Steve Aylward will update us on the statewide effort to repeal the new Massachusetts gas tax.

If you want to make a difference, please don’t miss this event. You can register at www.greaterbostonteaparty.com

For only $15 per person (the cost of lunch and materials), you will learn:

-How to use investigative reporting tools and skills

-How to enhance state transparency with open records laws

-How to hold elected officials accountable through social media

-Legal tools to protect your liberties and empower citizens

Together, we can begin the hard, but important job of taking back America.

2 Responses to "Citizen Watchdog Training: This One’s for You, Andrew Breitbart"