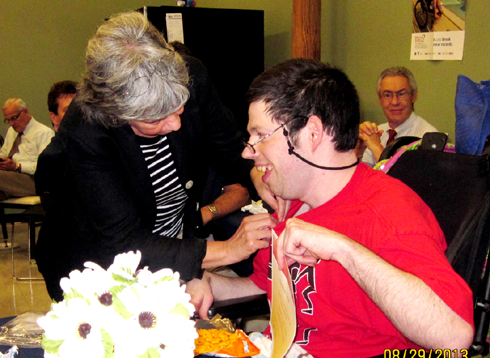 LAWRENCE – Families, friends, supporters and CLASS staff gathered as 13 members of the Aktion Club of Kiwanis of Greater Lawrence received their service pins on Aug. 29 to commemorate their volunteerism and one year of service to the organization. Kiwanis Lt. Gov. Dan Bennett, Div. 10 and 11, presided and presented the honors to CLASS individuals, all volunteers who live in the Merrimack Valley and work on projects to benefit their community.

Aktion Clubs, sponsored by Kiwanis, are service clubs open to adults living with disabilities who want to take on leadership roles and make a difference. The new Aktion Club members, who all attend CLASS day programs, have spent the last year writing letters of support to troops overseas; supporting fundraising efforts for worthy projects, such as the new Pediatric wing of Lawrence General Hospital and the Kiwanis endeavor, Project Eliminate; and writing cheerful cards to sick children staying in the LGH.

Aktion Clubs, sponsored by Kiwanis, are service clubs open to all adults living with disabilities who want to take on leadership roles and make a difference. Aktion Club currently has 8,400 members in 400 clubs in seven nations. Members have invaluable opportunities to:

• Give back to the community and the world through meaningful service. • Build relationships with community members who enjoy helping people achieve their full potential. • Learn Kiwanis values such as friendship, altruism and goodwill.• Participate in annual Aktion Club contests and • Enjoy fun and fellowship of a true club experience.

About Kiwanis – Kiwanis is a global organization of volunteers dedicated to changing the world, one child and one community at a time. Headquartered in Indianapolis, Ind., Kiwanis International is an international, coeducational service club founded in 1915. Current membership is nearly 600,000 members in 16,298 clubs in 80 countries.

About CLASS – The mission of CLASS/Arc of Greater Lawrence is to support, promote, and facilitate the inherent rights of individuals with disabilities to experience a life of opportunity for personal growth and active, meaningful engagement in their community. A human services agency with offices in Lawrence, North Andover and North Reading, CLASS has supported people with disabilities, their families and their caregivers since 1976 by building an environment that promotes community partnership and life enrichment. At CLASS, families and caregivers are supported by a professional, dedicated staff offering advocacy as well as a range of services crucial to their loved ones’ success.