By Tom Duggan on November 3, 2021Comments Off on DePena Pulls Off Upset Win, Defeats Kendrys Vasquez for Mayor of Lawrence

Vasquez was appointed mayor by the city council after Mayor Dan Rivera abandoned the job to work for Republican Governor Charlie Baker earlier this year.

At the time, Vasquez said he would not run for the job if appointed acting mayor. He then declared himself a candidate a few weeks after being appointed.

Vasquez came in first place in the September preliminary election among five candidates and was seen as the front runner through the entire race. DePena placed second in the preliminary, thinking the three candidates who lost would support him. None of them did. Willie Lantigua endorsed Kendrys Vasquez. Vilma Martinez stayed neutral publicly, but most of her supporters went with Vasquez.

Adding to Vasquez’s front runner status was an infusion of campaign donations from outside the city, an endorsement by former Mayor Dan Rivera, State Rep. Marcos Devers, and several heavy hitters in Democrat politics in Boston.

If there was a turning point in this election, some DePena supporters said it was when the Vasquez campaign circulated a campaign flier attacking Brian DePena’s wife and family with their photos on it.

“That was the beginning,” campaign worker Jackie Marmol said.

“Brian was very down when he saw that flier, you could see how hurt he was. He’s a positive person and he doesn’t attack other people so, he is always surprised when it happens like this. But, he didn’t attack back, he didn’t get angry, he just said ‘OK, now we work harder.’ That’s when the momentum started to change.”

“What kept the momentum going was when The Valley Patriot story about Lantigua endorsing Kendrys Vasquez came out. Willie was trying to be sneaky and he sent out endorsement messages to only his core supporters so nobody else would know, but the paper found out, printed the story, and that’s when we started to see a difference at the doors. People were much more interested in hearing what Brian had to say after that.” 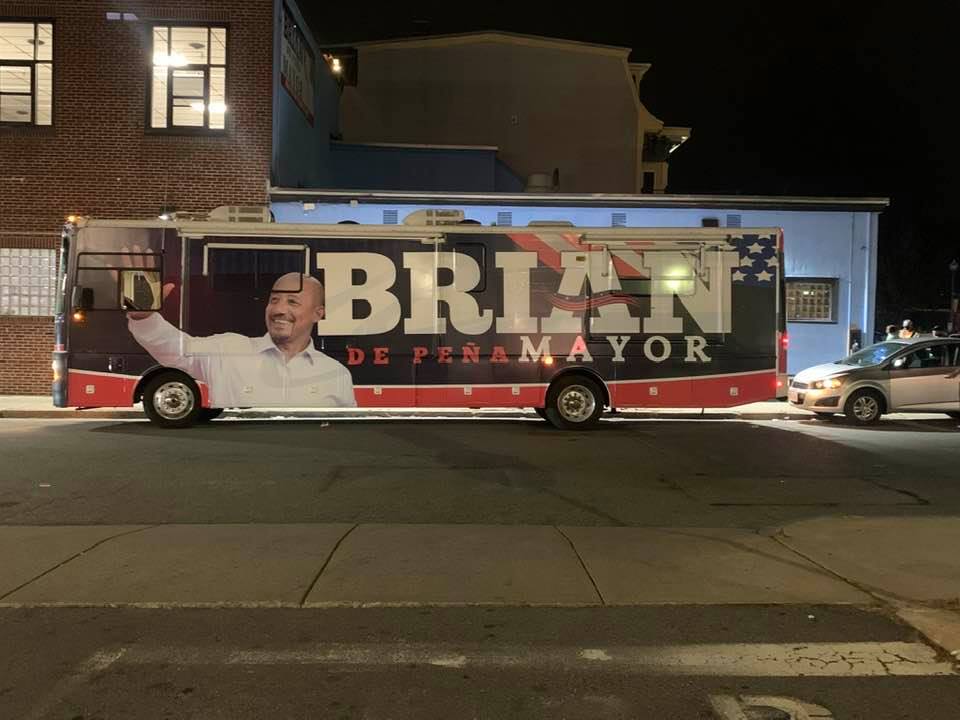 Depena celebrated at this headquarters on Broadway with his wife and family, announcing his victory to about 300 supporters. From there, the DePena bus and a caravan of more than 30 cars paraded from headquarters to Lawrence City Hall.

“Now it’s the people’s turn!” DePena said over a bull horn to cheering supporters packed into the lobby of city hall.

“See that office up there,” he asked pointing to the mayor’s office on the third floor.

DePena also congratulated Kendrys Vasquez for a hard campaign and told The Valley Patriot he is set to hit the ground running “starting tomorrow!”