By Tom Duggan on November 5, 2014Comments Off on Devers, Rivera Team Up in Second Miracle Win Against Lantigua 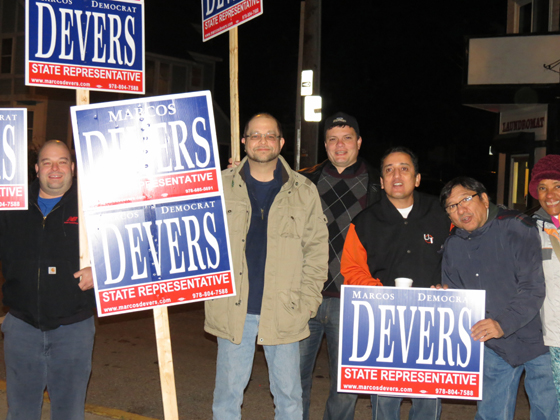 For the second year in a row the alliance between Lawrence Mayor Dan Rivera and State Representative Marcos Devers resulted in what Rivera calls “miracle wins” against the once thought unbeatable former Lawrence Mayor Willie Lantigua.

Devers Campaign Manager Dan Mackland Rivera (no relation to the mayor) said he had to look at the results three times before it sunk in that they had twice defeated Lantigua.

“It was the same kind of rush as last year,” Mackland Rivera said. “I kept looking at the numbers in shock. It took a while to sink in but then that rush hit and I think we all feel very grateful that the people of Lawrence have rewarded Marcos Devers and rejected the politics of Willie Lantigua.”

Devers won reelection as the 16th Essex District’s State Representative with 3,658 votes over Lantigua who placed second with 3,124 votes for a 444 vote difference.

Republican Lawrence City Councilor Roger Twomey who claimed he had a strategy to defeat both Lantigua and Rivera placed last with only 912 votes. Twomey was 2,746 votes behind Devers who placed first and 2,302 voted behind Lantigua. 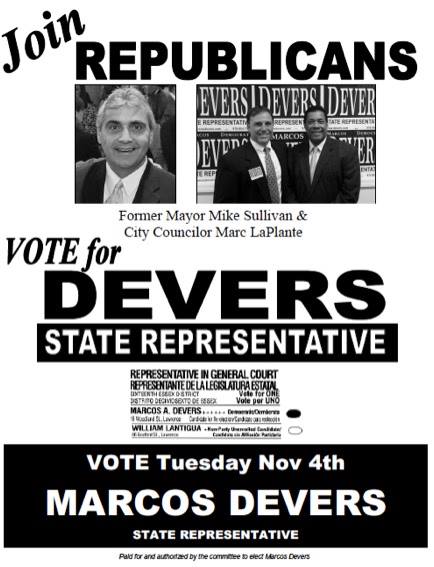 Earlier in the campaign Devers says he approached Twomey asking him to drop out of the race fearing a three way race would result in a Lantigua win.

“There was no talking to him,” Devers said. “He has been convinced by Willie’s Republican friends that he can win. He doesn’t get it. He is a nice man and wants to think the best in people, so he refuses to believe his republican friends are using him to do Lantigua’s bidding but they are. They put him into this race to help Willie Win. That means we have to work even harder,” Devers concluded back in August.

Former Lawrence Mayor Mike Sullivan and District “F” City Councilor Mark LaPlante organized a Republican effort to oppose Twomey’s Republican candidacy saying that a vote for Roger Twomey was a vote for Lantigua, adding that Twomey’s presence in the race divided the anti-Lantigua vote. Fliers with LaPlante and Sullivan’s photo on it endorsing Devers were mailed to Republican and Independent voters the weekend before the election.

When Councilor LaPlante entered the Devers Victory Party moments after the results were announced the room erupted with cheering, Devers supporters slapped him on the back and hugged him thanking him for helping to “defeat the snake”.

Campaigning as a Democrat

Despite the fact that Willie Lantigua left the Democratic Party and ran as an Independent, the former Lawrence mayor tried to win by deceiving the Lawrence voters by placing the word “DEMOCRAT”on all his campaign signs. 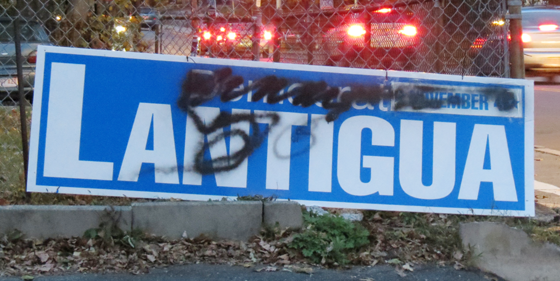 “This is the kind of thing we are trying to get away from,” Lawrence Mayor Dan Rivera said. “I’ve never seen a candidate lie about their own political party before but that’s what you get with this guy.”

Vandals hit many of Lantigua signs the night before the election spray painting over the word Democrat on many of his signs in North Lawrence.

“He is not a Democrat,” Devers told the Valley Patriot. “He left the party, the party wants nothing to do with him and I think it’s worth noting that not only did Lantigua lose today all of his candidates lost as well.”

A Fight and a Celebration

“We killed the snake!” Devers supporters shouted after the results were announced. Supporters chanted “MARCOS! MARCOS!” some of whom were once supporters of Willie Lantigua.

Francisco Brea, who never supported Lantigua said he was “embarrassed” by the way Lantigua had conducted himself as mayor in the last four years. “He is an embarrassment to this city and he is an embarrassment to the Dominican community. We came to this country to get away from the dirty politics in our country, the threats, the bullying, and then this guy brings the hateful Dominican politics to this country, to this city. We don’t want that. We came here to get away from that. Marcos has to win. The Dominican people here have to reject Lantigua’s hate.”

After losing to Dan Rivera by only 84 votes in last year’s mayoral race, Lantigua left the Democratic Party and became an independent to run against Devers vowing to get even with Devers for helping Rivera defeat him in 2013. He also vowed to get revenge against Rivera by starting a recall election after his plan to defeat Devers was complete.

Those plans may be on the back burner for the two-time loser Willie Lantigua.

Throughout the day Tuesday, Mayor Rivera held down the fort in South Lawrence campaigning for Devers. “My job was to help Marcos in South Lawrence where Twomey was strongest to try and take as many votes as we could from Councilor Twomey’s base,” Rivera told the Valley Patriot.

That lead to a clash between Lantigua and Devers supporters which resulted in a shoving match that had to be broken up by Lawrence police.

“We are going to beat this guy once and for all,” Devers said after the scuffle as he greeted voters Tuesday afternoon.

“Willie Lantigua and his puppets are a cancer on this city and we have to finish them off once and for all, or they will continue to cause destruction in our city. We are about love, and helping people. They are about dividing people and using government to get revenge. The people of Lawrence deserve a representative who will focus on moving the city forward not dragging us back to the same tired old politics of divisiveness and hatred.”

As for Lantigua, he was seen throughout the day hopping from polling location to polling location with former Deputy Police Chief Melix Bonilla, School Department employee Jose Alfonso Garcia and Lawrence Police Officer Gary Yancy, shoring up his base of support and getting his voters to the polls with free rides.

Indicted Parking Clerk Justo Garia was also seen Tuesday holding Lantigua signs and organizing sign holders at Valebrook Apartments. Garcia was arrested after the FBI caught him stealing money from the city’s parking garages and depositing it into Lantigua’s campaign account. His trial is slated for next month.

Republican City Councilor Roger Twomey was nowhere to be seen on Election day.

“We out worked him, it’s that simple,” Mackland said. “We took Willie’s ground game right to him and I think we are going to beat him,” he said during a lull in the action by mid afternoon.

The Devers campaign said that they looked at Lantigua’s strengths and used them against him.

“It’s all the about the ground game,” Mayor Dan Rivera said. “We know Willie Lantigua wins with his ground game, his Get out the vote strategy is second to none, knocking doors, and working the phones and like we did last year in the mayor’s race, we are taking the ground game to Willie today and I know we have him beat.”

Lantigua refused to call Devers to congratulate him after the loss.

Devers, Rivera Team Up in Second Miracle Win Against Lantigua added by Tom Duggan on November 5, 2014
View all posts by Tom Duggan →