By Tom Duggan on April 4, 2014Comments Off on DiAdamo Files $5MIL Lawsuit Against Their Client, The City of Lawrence over School Building Lease 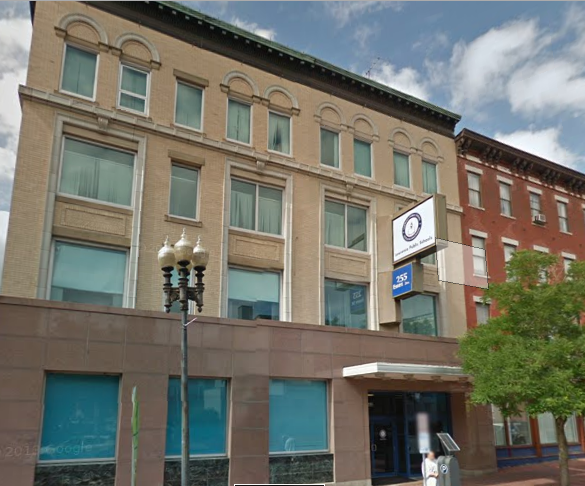 DiAdamo’s downtown building has housed the Lawrence School Department central offices for more than 20 years. According to visionappraisal.com the assessed value of the DiAdamo building in 2013 was $801,200 representing a mere two and a half years of rental payments by the Lawrence School Department. The DiAdamo’s have long disputed that amount but have never provided any information to back their claim.

According to documents obtained by The Valley Patriot, Carmine and William DiAdamo of the DiAdamo and DiAdamo Law firm have made more than $4M in rental payments from the taxpayers since 2001 (minus the missing 2009 records).

When the Valley Patriot asked the City of Lawrence for copies of the lawsuit documents DiAdamo filed Wednesday morning, one city worker referred to them as the “harassment documents” saying that DiAdamo was trying to bully the city into continuing to lease his building.

Reached late Thursday night, Mayor Rivera told the Valley Patriot that continuing to pay for the lease of the building made no sense for the taxpayers and that he fully plans to defend the city against DiAdamo’s suit.

“We found a situation where the cost of leasing that building is untenable,” Rivera said.

“We have to be looking for something that is most advantageous for the city. It just doesn’t work for us anymore there, we are looking for buildings that are going to be financially viable for the taxpayers. At end of the day people elected us to reduce cost of overhead in Lawrence. This is one of those examples. The current cost of housing the school department offices is just not acceptable and when we go into court I think we are going to be able to show that. I am prepared to defend the city on this.”

Rivera said that the city has sent out requests for proposals to rent, lease or buy space for the School Department offices as well as consolidate other city offices to cut down on overhead expenses.

During the 2013 election, Rivera said that he believed cutting costs and making city government more efficient was important to turning the city around. He said that asking for more state money to “plug every whole” was not going to solve Lawrence’s problems long term.

“The bid doesn’t even close until next Monday,” Rivera said. “I don’t even know if the DiAdamo’s bid, how many other buildings they may own, we are not looking for anything site or building specific. We are just trying to save the city money on office space,” Rivera said.

A Lease that Isn’t Really a Lease?

DiAdamo’s lease expires in January of 2015, but Superintendent/Receiver Jeff Riley (who took over the school system three years ago under state receivership), told the Valley Patriot last October that the school system is under no obligation to continue the DiAdamo lease and that it was his intent to move the central offices out of DiAdamo’s building.

“You walk through this building now, it’s a ghost town,” Riley said during his interview. “We just have room everywhere, which is why on Tuesday, we are starting a working group with the school committee to look at the viability of this [building] lease going forward.”

“The first thing we did when we got here was, we got in a couple of people to support the work [we were going to do]. And the design guy who has a budget background, the first thing he says is, ‘you guys are paying $400,000 for a lease that’s no longer your responsibility and hasn’t been for years.’

Former Lawrence School Committee Member Mark Gray says the lease is illegal anyway and the city can leave the building any time they want. Gray claims that the current ten year lease is a violation of state laws because any contract longer than three years has to be approved by the City Council and the DiAdamo’s never went through that process for their ten year lease. The DiAdamos have disputed that claim but have never presented one document to back their denial.

DiAdamo is claiming that the city sent out requests for proposal for building space, but that he is prohibited from bidding on it for his building because the school department and the city neglected the building and it no longer meets the specifications of of a public bid.

DiAdamo claims that if the city does not renew the lease they are leaving him with a building that will take $5MIL to repair and bring up to code. If the city were to lose, that would make a (partial) total of more than $9M in taxpayer dollars to the DiAdamos for the lease of a building that Lawrence could have purchased more than a dozen times over.

He is trying to put a stop to the bidding process claiming it is illegal and could force the city to re issue requests for proposal.

The DiAdamos and the McCanns

The DiAdamo and DiAdamo Law offices are located next to city hall in the same building that houses the Lawrence School Department central offices.

They were fired in 2008 by Lawrence Mayor Michael Sullivan as the city’s worker’s compensation attorneys due to conflicts of interest arising from a lawsuit filed by DPW Director Frank McCann’s then girlfriend (now wife) Andrea Traficanti.

Traficanti answered directly to her boyfriend McCann at the Lawrence DPW when she filed a workers compensation claim against the city for work related stress.

With the DiAdamo’s representing the city against Traficanti’s claims, (McCann’s wife), Andrea won an award amounting to $612.06 per week, tax free.

Traficanti’s suit claimed that she can never work again. While her case was still pending she openly applied for public jobs including: the highway commissioner in Haverhill, the Cemetery Commissioner at the Belleveu Cemetery in Lawrence, and a job at the Lawrence Airport.

Despite not having their contract renewed, and the city’s pending appeal of the Traficanti award, Lawrence Mayor William Lantigua rehired the DiAdamos in the early days of his four year term in 2010.

The DiAdamos are not only the landlords for the School Department offices and Lawrence’s workers’ compensation attorney’s for the city, they also represented the Greater Lawrence Sanitary District while DPW Director Frank McCann (and convicted felon Lenny Degnan) sat on that board and approved his contracts.

The DiAdamo’s GLSD contract was still in affect while DiAdamo was representing the city against McCann’s wife.

According to a letter by Richard Hogan, Executive Director for GLSD; no Conflict of Interest documents (called a 268A) were submitted to GLSD between January 1, 2001 to present.

In short, the DiAdamos never properly disclosed the potential conflict of interest representing the City of Lawrence against Traficanti’s workers’ comp. suit, while they also worked for her husband Frank McCann as a board member of the GLSD.

Then there’s that Personal Crimminal Matter….

In 2011 Lawrence Mayor Willie Lantigua and his economic Development Director Patrick Blanchette appeared in criminal court on a restraining order filed against them. Appearing for both Lantigua and Blanchette was none other than William DiAdamo.

William DiAdamo told the Eagle Tribune that he had no idea who was paying his bill when he represented Lantigua and Patrick Blanchette, (Lantigua’s Economic Development Director) during the restraining order hearing.

The Valley Patriot submitted a public records request for payments made to the DiAdamos during mayor Lantigua’s term in office to determine if taxpayers paid the DiAdamo legal bill for Lantigua and Blanchette’s court appearance.

Lantigua violated orders from Secretary of State Bill Galvin’s Office and two orders from both Lawrence Superior Court Judge Thomas Murtaugh and Judge Robert Cornetta to release the documents and left office never fully releasing the information on the public bills for the DiAdamo Law Firm.

DiAdamo and attorney’s for the City of Lawrence will appear at Lawrence Superior Court on Friday.

*Editor’s note: the photo of McCann and Traficanti states it was “last year”. This was a screen shot of previous news story from 2009.

DiAdamo Files $5MIL Lawsuit Against Their Client, The City of Lawrence over School Building Lease added by Tom Duggan on April 4, 2014
View all posts by Tom Duggan →