By Tom Duggan on June 6, 2010Comments Off on EPA: Untreated Raw Sewage Flowing into Shawsheen 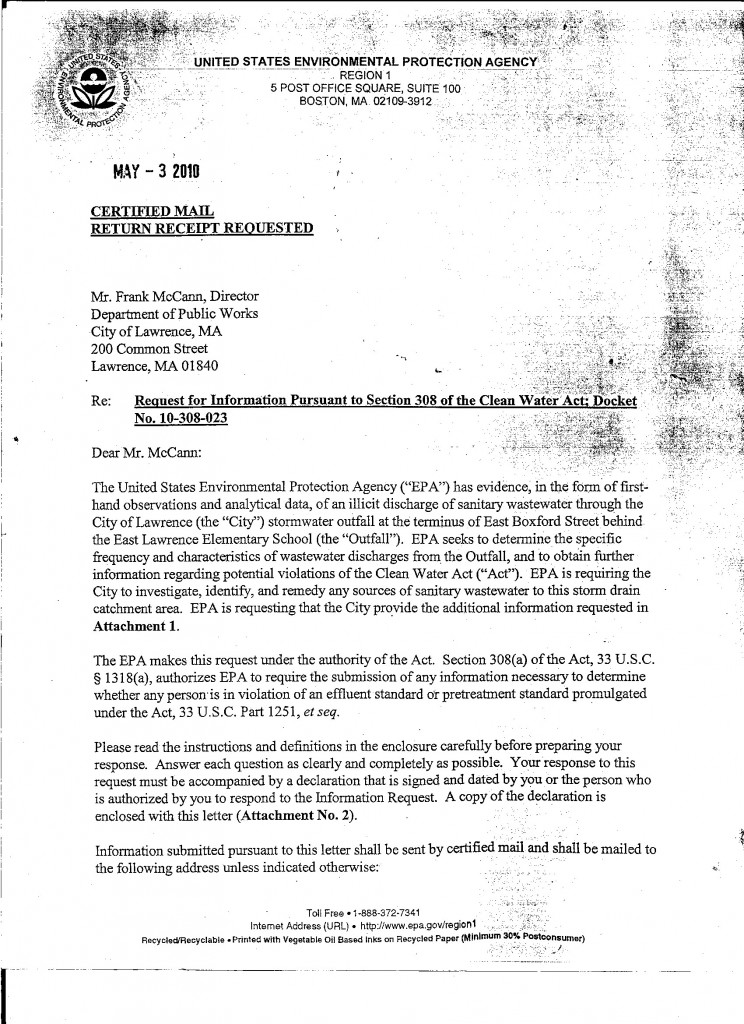 The Environmental Protection Agency (EPA) has sent a letter to Lawrence DPW Director Frank McCann (right) informing the City of Lawrence that the EPA has first hand knowledge that the city is pumping wastewater (human waste) into the Shawsheen River.

According to documents obtained by The Valley Patriot, the EPA received complaints by members of the Shawsheen River Watershed Council and parents involved in the South Lawrence East Little League that the City of Lawrence has been dumping human waste into the Shawsheen River through a storm water drainage pipe that runs along the side of the ballfields behind the South Lawrence East School. The smell of human waste was often so strong as to overpower the children trying to play on the ballfields.

The Environmental Protection Agency sent an agent to the South Lawrence East School, which abuts the Shawsheen River and beneath which the huge drainage pipe seems to run, and took real time samples of the human waste water pouring out of the drainage pipe. After sending the samples to an independent laboratory, they determined that human waste water was indeed coming out of the pipe and being dumped directly into the ShawsheenRiver without any type of treatment.

A reporter from the Valley Patriot inspected the site to take the photographs that accompany this story and became physically ill before even gaining entrance to the area where the waste water was freely flowing into the Shawsheen River.

“It poses a health hazard,” EPA enforcement official George Harding told the Valley Patriot. Harding said that the contaminated water flowing into the Shawsheen could cause illness to anyone whose skin comes into contact with the water because of E-coli and other contaminants being dumped into the river. It was apparent that school children routinely use this area as a shortcut.

“Right now we do not know the actual source of the contaminated waste water, but the city has hired an outside engineering consulting firm to test the water once a week during dry weather and to track back the source of the contamination. It could be anything from a city sewage pipe being illegally hooked into the drainage systems in that neighborhood, or it could be a leaking pipe that is somehow contaminating that line,” Harding said. “but we will not know the answer to that until they track back the source.”

The Shawsheen River runs through south Lawrence and into North Andover where it empties into the Merrimack River at Sal’s Riverwalk near Rt. 495.

Harding said that as far as he knows, town officials in North Andover were not notified by Frank McCann or the city of Lawrence that human wastewater was flowing into the Shawsheen, posing potential health hazards running through North Andover.

“It appears that one or more sewer connections might have been made to the drainage pipe which isn’t particularly uncommon in older cities, but we are requiring them to study it and find the source of the bacteria, e-coli and other chemicals going into the river from that pipe. It is possible, it may be a cross connection with a city sewer line or it could even be coming from a single building or house in that neighborhood. Whatever the source is, they need to go up into system to find where this is coming from.”

Harding sent his letter to DPW director McCann on May 3rd of this year and the letter states that the issue must be resolved by May 28th. Harding says the city has not resolved the issue but even though the wastewater has been dumping into the Shawsheen for over two months, they did grant the city an extension to June 15th.

As of the time we went to print (June 8th) our reporters observed first hand that human waste water was still flowing into the Shawsheen (see photos).

Chairman of the North Andover Board of Selectman Tracey Watson audibly gasped when she was asked for a comment on the water contamination. “Are you kidding?” she asked after a long pause. When told that the human wastewater has been flowing into the Shawsheen since at least April, Watson was speechless and then became emotional.

“If the date of that letter is May 3rd like you say,” Watson told our reporter, “we should have been notified that day. That river runs right through North Andover and by the way, it empties into the Merrimack. So, this waste is flowing right into that river that we worked so hard to clean up.”

Selectman Dan Lanen echoed Watson’s concerns. “I am shocked that nobody from Lawrence bothered to pick up the phone and let us know that we had contaminated water running through our town.”

“Town officials should have been notified the next day. The hazardous waste on my border being dumped on the banks of the Shawsheen was one thing. They cleaned it up, but now they’re allowing this stuff to pollute our river and they don’t even tell us? I’m an environmentalist and I take pride in the clean rivers and streams in North Andover we work very hard to keep it this way.”

Danger to Public Health in Lawrence and North Andover 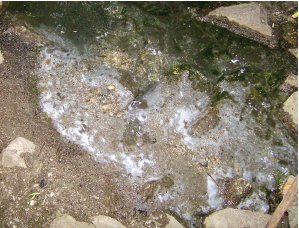 George Harding from EPA said that people need to be careful when coming into contact with contaminated water. “Anytime you have sewage discharge there are pathogens in the water, our prime concern is, if people are coming in contact with water, canoeing, wading, fishing, or coming in contact with pathogenic organisms, the public’s health is at risk. How much risk depends on how much is being discharged. We won’t know what that is until the engineering consulting find the source.”

Selectman Watson said that she was very concerned about the people of North Andover and added that had she known about the situation she would have taken steps to make sure the public was aware of the problem.

“When is the insanity [in Lawrence] going to stop,” she asked with desperation in her voice. “We had the illegal dumping down there (last month) and now this? When is someone going to go into that city and put a stop this kind of stuff? All I want is for Lawrence to succeed and be a vibrant city, but I don’ see it happening. I see it going backwards, it’s frightening.”