By Christine Morabito on October 15, 2014Comments Off on Forced Deposits a Consumer Con Job 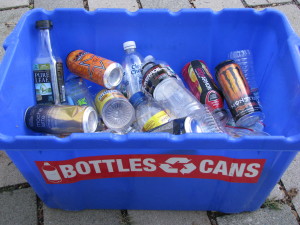 If Ballot Question 2 passes in Massachusetts this November, your grocery bill and your honey do list will increase significantly.

This ballot initiative expands the bottle bill of 1983 to include a 5 cent deposit on bottled water, juice, iced tea, sports drinks and other non-carbonated beverages. As has become fashionable on Beacon Hill, this fee will be automatically adjusted (ahem, increased) every 5 years due to inflation, without our legislators ever having to vote for something this distasteful again.

There are so many reasons to oppose this:

We are a busy people. The last thing we need to worry about is how to store a bunch of rubbish until we can schlep it to the nearest redemption center on Saturday morning, then wait in line at the service counter just so we can get back the $1.20 deposit we paid for that case of Poland Spring. This is efficient, modern age recycling?

Chances are we will come to realize that time is money, and toss the bottles into our curbside recycling bins, forfeiting the deposit. Surely, our neighborhood trash picker will be happy to collect the bottles and the money.

Opponents of this initiative are accused of misleading the public by stating that politicians get to keep the unclaimed deposits. This bill promises to create a Clean Environment Fund, as if this is some novel idea. But we already had such a fund when they began collecting soda and beer deposits. That well-intentioned fund has since been raided, funneling $350 million to state government over the last 10 years.

Just like our ever increasing sales tax and gas tax, forced deposits are a regressive tax, which affect low income people the most. Statistics show the poor are least likely to recycle, hence, not likely to recoup the deposits. As Elizabeth Warren likes to say, those who can least afford it will be “getting hammered.” And how do we expect the elderly on fixed incomes to jump through the bottle redemption hoops, when they may not even have a car?

Proponents of forced deposits say the cost will be a mere 5 cents a bottle, so what’s the big deal? But, we are not hearing about the increased handling fees also in the bill. Beverage distributors will be required to increase the fee paid to dealers, and bottlers will pay more to distributors and dealers for each returned container.

Since the distributors and bottlers reap no benefit from the deposit, this bill actually increases their cost of doing business. We are naïve if we believe those costs won’t be passed on the consumer in the form of higher priced beverages. In turn, our grocer will have to raise prices on lots of different items to make up their loss. Now residents living on the New Hampshire and Rhode Island borders will have one more reason to buy groceries across state lines.

What about the additional burden on grocery stores like our beloved Market Basket? They already sacrifice valuable, retail space to operate bottle redemption equipment. The machines cost money to clean, empty and otherwise maintain. How will they handle the tsunami of new bottles? What about the sanitation considerations? Do we really want each and every customer bringing all those germy bottles into a store that sells food? The myriad of bottle shapes and sizes added to the mix will not fit into the old machines, so customers may have to redeem them at the customer service counter.

According to the Executive Office of Energy and Environmental Affairs, nearly all Massachusetts towns already offer some type of recycling program. And, we already pay for them. Bottle deposits made sense 30 years ago, before we had widespread community recycling. Northbridge Environmental Management Consultants conducted economic and environmental impact studies that show Question 2’s deposit system would cost 10 times more than curbside recycling, and the increase in recycling rates would be a mere 0.13 percent, or one-eighth of one percent of the waste stream. So, what we have is an expensive law with very little reward.

What makes more sense is to expand curbside recycling to all communities. Curbside recycling saves money, allows a larger variety of materials to be recycled, requires a smaller carbon footprint and will not financially burden our most vulnerable citizens.

Beacon Hill has been trying for 12 years to pass this expanded bottle bill, anticipating a windfall of some $27 million yearly in unclaimed deposits. They were unsuccessful for the same reason there is overwhelming opposition to it as a ballot initiative – because it’s just bad public policy. Let’s move forward, not backwards on recycling – vote NO on Question 2.

Bottle law: It’s about the money

The liberal case against expanding the bottle bill

Guest Opinion: Say no to more redemption fees in Question 2

The Fate of Unclaimed or “Abandoned” Deposits