By Tom Duggan on May 6, 2007Comments Off on Former City of Lawrence Comptroller Jim Limperis: Council President Drove Me Out of My Job 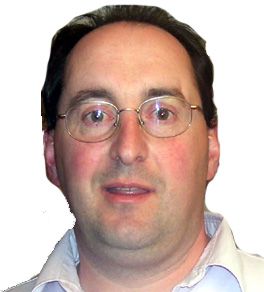 When Lawrence resident David Camasso was being interrogated by members of the Lawrence City Council last month, one issue was repeatedly brought up for Camasso to address: If hired as comptroller, would Camasso bow down to political pressure when it came to approving expenditures he believed were excessive, illegal or inappropriate?

Over and over, Councilors Gosselin and Blanchette questioned Camasso, implying that previous comptrollers had received political pressure from the mayor to approve spending that was illegal, excessive or not properly authorized.

But Methuen resident and former City Comptroller Jim Limperis says he was shocked to hear such questioning, given the circumstance surrounding his departure from the city’s employment.

“After driving me out of my job for questioning excessive spending, Councilor Blanchette had the nerve to sit there and pretended to be the watchdog against excessive spending,” the former comptroller said. “But it was the City Council, in particular Council President Patrick Blanchette who is most responsible for me leaving as the city’s comptroller because I wouldn’t go along with giving raises to his friends in City Hall.”

Limperis says that on several occasions he refused to sign off on city expenditures that he found contained “very suspicious activity” and fell under the category of “excessive spending.”

According to emails and memos obtained by The Valley Patriot, Limperis refused to sign off on non-union raises, questioning how the city could legally give raises to non-union workers when no money was available in the budget and while collective bargaining was still in progress with the city’s 22 labor unions.

That’s when Council President Patrick Blanchette sent an email to Limperis demanding that he not question the expenses, stating: 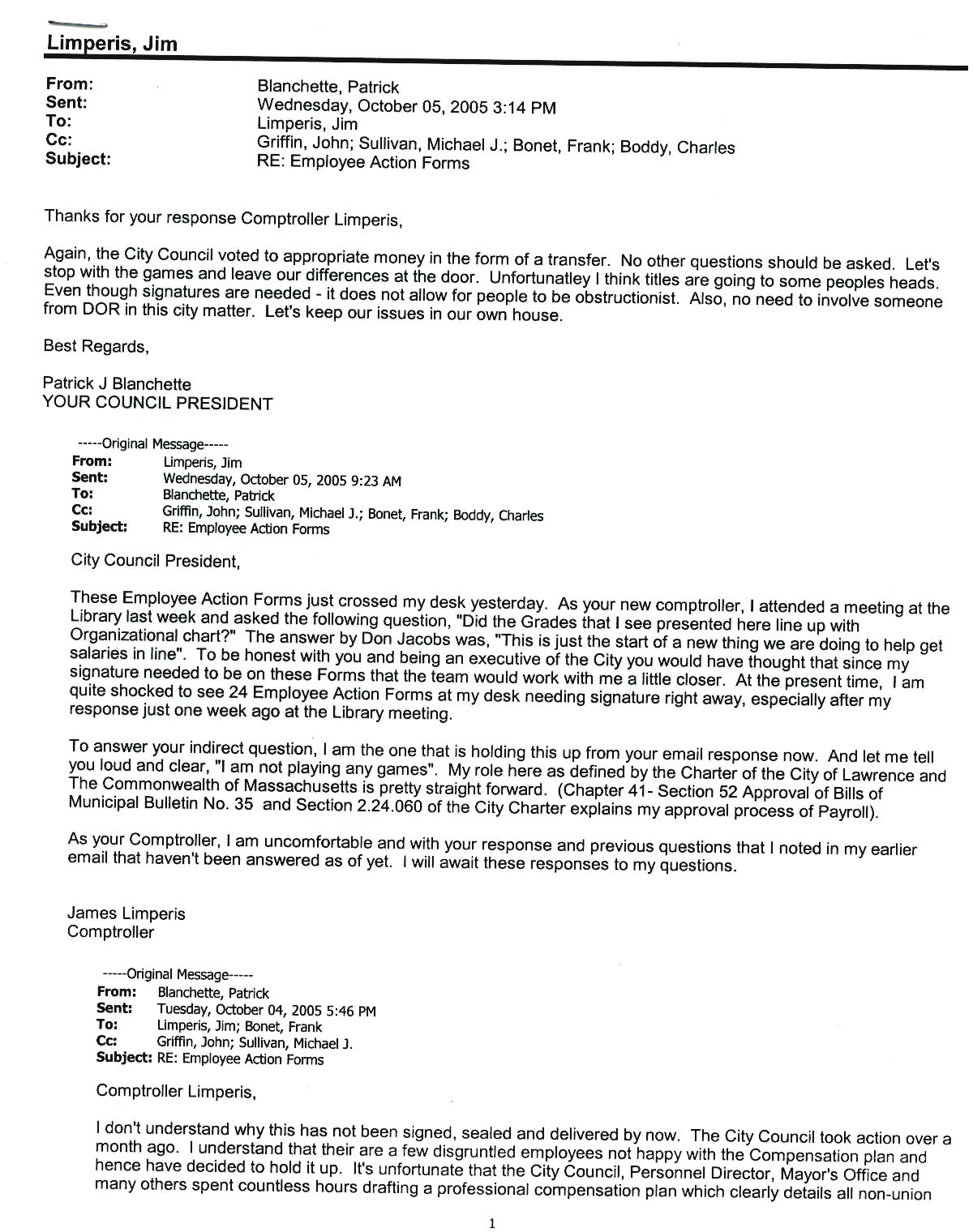 “Again, the city council voted to appropriate money in the form of a transfer. No other questions should be asked. Let’s stop with the games and leave our difference at the door. Unfortunately I think titles are going to some people’s heads. Even though signatures are needed – it does not allow for people to be obstructionists. Also, no need to involve someone from DOR (Department of Revenue) in this city matter. Let’s keep our issues in our own house.”

Limperis says that during the entire seven months he was comptroller, he routinely experienced interference from Blanchette to approve expenditures he felt were illegal because there was no funding source for the appropriations.

“Patrick Blanchette is one of the most unprofessional people I have ever had to deal with. He wanted to make sure his friends in City Hall got their raises at any cost. He was telling me to disregard Massachusetts General Laws and sign my name to an expense that I have every legal right to question. And when I said I was going to the Department of Revenue to get clarification, the political attacks began.”

“But after he made my life so miserable that I could no longer stay in my job,” he continued. “he changes his story when he is in public, telling the voters during Camasso’s hearing last week that he wants a comptroller who will question expenditures. What he really wants is a comptroller who will question the mayor but blindly approve whatever the City Council and, in particular, the council president, wants. During Camasso’s hearing, he stated pretty clearly that he wanted a comptroller who would question expenses and refuse to sign off on anything questionable. Yet, when I tried to do that, he came after my job.”

Limperis even put his concerns in writing during the controversy. In a letter to Mayor Michael Sullivan dated October 7, 2005, Limperis writes:

“As your comptroller, I would like to alert you to ‘very’ suspicious activity in regards to 24 Employee Action Forms dropped off in my office this week that needed my approval … The major reason why I have held off my approval to these Employee Action Forms is because I feel that this expenditure is excessive and will cause continuous pressure in the next few months as it relates to collective bargaining with the 22 unions throughout the city.”

“I have received continuous pressure from Council President Patrick Blanchette as to ‘why isn’t this signed, sealed and delivered yet.’ … I am still uncomfortable with non-answers and most recently the aggressive push for my approval by council president Patrick Blanchette. At no time in the near future am I willing to approve these transactions as I feel they are not in the best interest of the city of Lawrence.”

According to Mass General Law 41, section 52, it states: “The auditor or officer having similar duties in cities shall approve the payment of all bills or pay rolls [sic] of any departments before they are paid by the treasurer, and may disallow and refuse to approve for payment, any claim as fraudulent, unlawful or excessive.”

Limperis says that the interference of the council president and Blanchette’s constant harassment during the work day, “as well as the insults and slanderous comments he made at City Council meetings, always in my absence, made it very difficult for me to do my job as comptroller. He was doing everything humanly possible to get me to approve expenditures I believed were inappropriate and made it very clear he was going to have my job if I did not adhere to his wishes, legal or not. He is a bully and he is the single most reason I left the city.”

Limperis said he is bothered by comments made by Blanchette even after he resigned last year. “I’d finally had enough. I resigned and went back to the private sector and Blanchette is still taking cheap shots at me in public meetings. He has called me a quitter and made some very disparaging remarks about my character, of course now that I am gone, just as he used to do when I was not at a council meeting. I will tell you the truth. I left the city of Lawrence because of the behavior of the council president and it is no wonder there have been no applicants for the budget and finance director’s job and only one applicant for comptroller.

What professional in the private sector wants to deal with the likes of a bully who thinks it is perfectly appropriate to micromanage the day-to-day operations of the city and push his weight around making threats of political retribution. That’s why Lawrence can’t get good applicants and it’s why Lawrence can’t keep good employees for very long.”

Limperis says that the last straw centered around his travel allowance and the stipend he received as part of his contract with the mayor’s office.

“All of a sudden, Blanchette is making public statements about my contract at City Council meetings, making innuendoes that I am corrupt or incompetent, making motions to take away my travel allowance and referring to some city ordinance stating that as a department head I am not entitled to any stipend. But the police chief gets a travel allowance, the treasurer gets a stipend, the superintendent of schools has a city car in his contract. But the one guy questioning raises for his friends in City Hall is suddenly stripped of money I was entitled to as part of my contract with the mayor. I had an agreement when I came on board with the city and he bullied me and John Griffin until I finally gave up and said I don’t care about the car allowance anymore. I am going to back to the private sector.”

Limperis said it was Blanchette’s ongoing public statements about him at City Council meetings long after he resigned that led him to come forward after leaving his position with the city of Lawrence.

“For the record, I am not a quitter,” Limperis said. “I was driven out of my job and if it wasn’t for Blanchette, I would still be there working in City Hall I hope Dave Camasso has better luck with him than I did.”

Former City of Lawrence Comptroller Jim Limperis: Council President Drove Me Out of My Job added by Tom Duggan on May 6, 2007
View all posts by Tom Duggan →