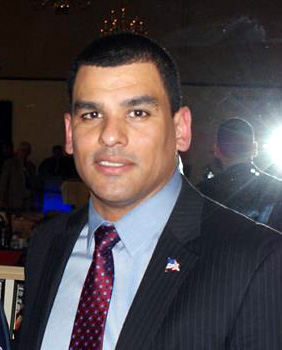 Massachusetts Veterans’ Services Secretary Francisco Urena honored us with his presence and his presentation for the four local veterans recognized that evening.

“On Behalf of Governor Baker, Lt. Governor Polito, and the 365,000 veterans who call Massachusetts home, it is a great honor to be here in the great city of Lawrence with each and every one of you all who are great supporters of this great newspaper, The Valley Patriot,” Urena said addressing the crowd of hundreds who packed the room.

“The Valley Patriot is a paper which dedicates itself to ensure the awareness of our veterans with ongoing stories of the service and sacrifice. Each month, The Valley Patriot publishes The Valley Patriot of the Month, honoring men and women who have served, who have sacrificed, and returned back to their communities to help other veterans. I know Tommy Duggan goes out of his way to make sure that they get the very front page of his paper, which is very admirable this day and age. So, for Tommy and The Valley Patriot, a great round of applause tonight.” 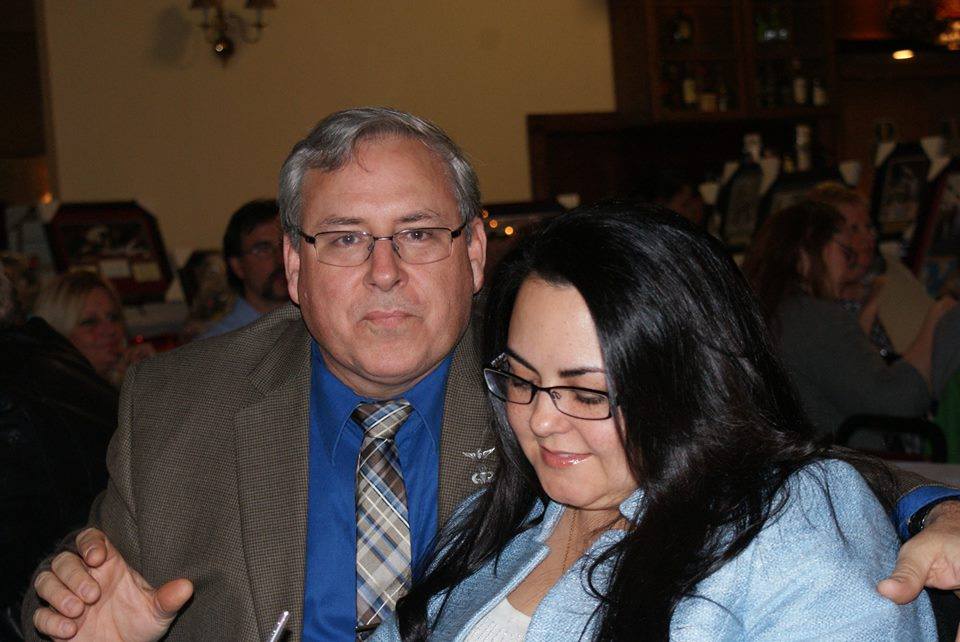 “We have a couple of Valley Patriot Hero Veteran Awards to give out tonight, and we’re going to start with Sergeant Major Eric Nelson, United States Army, retired.

He was part of the 82d Airborne Division and the 56th Medical Evacuation Battalion, Air Ambulance at Fort Bragg, and 3rd Military Intelligence Battalion.

In 2003, Sergeant Major Nelson was an Aviation Mission Operations Manager for the 4th Aviation Brigade stationed in Baghdad, Iraq. During that mission, he trained over 300 personnel on convoy operations with no combat accidents or injuries. Nelson was awarded the Bronze Star Medal.

In 2004, Sergeant Major Nelson became a Senior Aviation Trainer and performance coach stationed at the Joint Multinational Readiness Center in Europe until 2007. During that time, he facilitated workshops in community leadership, led a team of 45 trainers and experts and coached senior leadership. For his contributions, Nelson was awarded the Army Aviation Association of America’s Order of Saint Michael Medal for contributions in training and developing future Army aviation leadership.

Ladies and Gentlemen for these reasons and so many more, I am proud to present Sgt. Major Eric Nelson the 2016 Valley Patriot Hero Veteran Award.”

John Ratka is the Executive Director of the Veterans Northeast Outreach Center, following a distinguished 26-year career in the United States Navy.

John enlisted in the Navy in 1972. He completed 21 submarine deployments, numerous surface ship deployments and attained the rank of Command Master Chief.

“John was appointed to the position of Executive Director of the Veterans Northeast Outreach Center in Haverhill, October, 2002. Under his leadership, they established great partnerships with the Veterans Administration, Bedford, VA, the MA Department of Veterans’ Services, Housing and Community Development, the Department of Housing and Urban Development, Veterans’ Services Officers and many local community agencies.”

“John and his two sons, Ryan and Jacob, reside in Salem, N.H. A great round of applause for Valley Patriot Hero Veteran John Ratka!”

“JT Torres enlisted in the US Marines in 1987. He spent ten years in the service and accumulated numerous service medals after serving in Desert Storm, Desert Shield, and Operation Iraqi Freedom. We could read his accomplishments all day, but the most important reason JT is receiving this award tonight is because he is the president and founder of New England Veterans Liberty House.”

“After returning from battle with PTSD …JT could have walked away from the military and gone on to live his life doing something else. But JT spends his days… every day… helping veterans with counseling, job training, housing, getting them help with government services medical assistance and embodies the phrase Veterans Helping Veterans!”

“When he dropped off his resume at The Valley Patriot offices this week …. it was six pages long with a list of commendations, medals and extensive training.”

For this reason and so many more, we honor JT Torres tonight with The Valley Patriot Hero Veteran’s Award.” 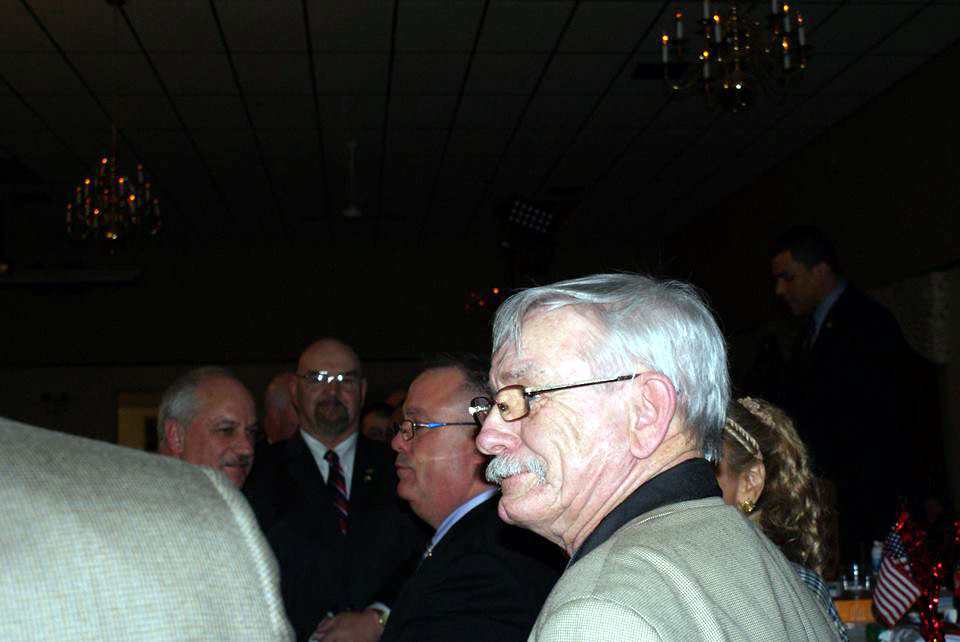 Before honoring our last recipient, Secretary Urena said he wanted to leave the stage and go off program to honor a Lawrence resident who is not only a member of The Valley Patriot family, but is also a hero Vietnam Veteran with a 50th Anniversary service pin.

“When our Vietnam veterans came home…” Urena said approaching Russell. “They did not get the welcome home that my generation of veterans received. They did not receive the welcome home that the previous generation of veterans received. So, tonight, and each and every time I have the opportunity to talk to our Vietnam vets, I want to tell them ‘thank you very much for your service,’ and I want to tell them… WELCOME HOME!”

Urena affixed the pin on Russel’s coat and Russell saluted him to the wild applause of the crowd.
“Richard Russell of Lawrence, thank you. On behalf of a grateful nation I want to present the 50th anniversary commemoration pin to Vietnam veteran, Richard Russell. But, this is not just for Rich Russell, for everything he does in the community; this pin is to ensure that we give recognition to each and every Vietnam veteran that we know. This pin has a message on the back. It says; ‘On behalf of a grateful nation that thanks you, and honors you for your service.’ … and Richard, welcome home!”

“I would be remiss tonight Tommy, if I didn’t start off by thanking your father for his service and sacrifice,” he said pointing to the banner bearing Officer Duggan’s name.

“I would also be remiss if I didn’t point out that you made a great point about the media earlier Tom. Let me give you one more example of how right Tom is about how bad the news media is”.
I was taken aback by the news today, and I’m sure Secretary Urena will agree with this. Today, all the major news agencies reported that it was national waffle day. But, not one mentioned that it was national Medal of Honor Day. That is pathetic. We must never forget, whether it’s a veteran’s service, or a police officer, or a firefighter who is killed or injured in the line of duty. We must never forget what they have done for all of us. That is the most important thing any society can do.”

“A few weeks ago, I talked to Tom Duggan and said the final days are coming for the BASH and we kind of overlooked one guy when putting these awards together.”

“He graduated high school 2004. In 2006, he enlisted with the National Guard here in Massachusetts. He went to active duty and served tours in Iraq and Afghanistan and he made us proud. In 2012, while operating a buffalo, which is a minesweeping vehicle, the vehicle struck and IED. (improvised explosive device) and he blew up. He was injured severely. He has dramatic brain injuries, as well as his knees and his legs.”

“He came home for medical treatment and spent seven months in a medical hospital in Virginia. When he was released, that wasn’t all for him. Going home and moving on wasn’t good enough. He needed to go back, and he needed to continue to serve, so he did.”

“On April 15, 2013 he was assigned as an explosive ordnance engineer to the Boston Marathon. We all know what happened that day. Guys like Don Jarvis see bombs and run toward them, think about that. Many people serve, and this is not to take away from anyone’s service, but then there are those who go above and way, way beyond. Who in this room would want to run towards a bomb? None of us.”

“But, when he came home he had many issues to deal with including PTSD. We lose 22 veterans a day to suicide from PTSD. But Don Jarvis said ‘I’m not going to sulk and cry, I’m going to do something about it. I’m going to become active.’ And he did.”

“I remember the day when one of our guys who was very close to Don, who served in Iraq and sadly took his own life. He had an 18-year-old son and was being shipped home”

“It was a day when the Massachusetts State Police were conducting a major training mission at Logan airport. We could not get an honor guard to the airport for the return of our serviceman. So, Donny and I called you, Mr. Secretary Urena and Colonel McGinn of the Massachusetts State Police, and the environmental police, who, thanks to Donny, had an honor guard to greet the families when they came off the plane carrying the remains of their loved one.”

“They gave a full controlled motorcade to the family’s home, which was beautiful, and meant so much to them. That was mostly due to Donnie Jarvis who always make sure that nothing falls through the cracks.”

“But also, through Donnie’s motivation we take homeless veterans to Red Sox games and other games. As you can see, Don has his PTSD service dog Mocha with him here tonight. Service dogs are so wonderful for our veterans. But, they can cost more than $10,000 per dog. Anyone here who has an opportunity to contribute to these causes like Delta Dog, I highly encourage you to donate.”

“On June 14, on Flag Day this year, thanks to Donnie we are going to bring 30 Delta Dog veterans to a Red Sox game.”

“Donny is also the Veterans Graves Registration Officer in Newbury. Last year, while taking inventory of the graves at the cemetery, he saw it was overgrown and disgraceful. There were trees coming out of headstones, and there were veterans’ graves that had gone unattended for decades.”

“Donnie said ‘This is unacceptable and I’m going to do something about it.’ Because they wouldn’t allow him to operate a chainsaw in the cemetery, he got a handsaw and cut down every overgrown brush and tree over every veteran’s grave, and he did it by hand. The students at Triton Regional High School even came out to help.

“Everything Donnie has done has been to help veterans … and I can’t think of a more fitting recipient for this Valley Patriot Hero Veterans Award tonight than Donald Jarvis for everything you’ve done. Thank you Donny!”