By Tom Duggan on June 25, 2015Comments Off on Garbage Truck Crashes into Lake Cochichewick in North Andover 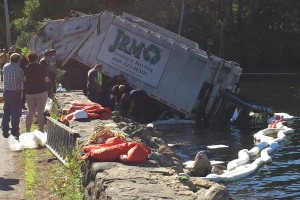 A garbage truck went off Great Pond Road in North Andover, Thursday and crashed into into Lake Cochichewick at about 6AM. The trash truck is owned by JRM Hauling and Recycling of Peabody MA.

North Andover  Police and Fire say they received a 911 call reporting a truck had crashed into a retaining wall in the area of 1650 Great Pond Road (Also State Highway Route 133).

North Andover Police and Fire responded and, upon arrival, determined that this was a trash truck that had crashed into Lake Cochichewick and was submerged.

North Andover Fire launched a boat to rescue the operator of the truck, a 27 year old male, who had climbed out of the truck while it was sinking. He was transported to Lawrence General Hospital with non-life threatening injuries.

Due to the nature of the crash, the Department of Transportation, Department of Environmental Protection and Massachusetts State Police Commercial Vehicle Enforcement were called to the scene.

North Andover Police say that after removal, the truck will be transported to Coady’s where the State Police Commercial Vehicle Enforcement Unit will conduct a safety inspection. There they will check for any mechanical or electrical issues that may have led to the crash.

North Andover Police are conducting an investigation into the cause of the crash as well. The roadway will remain closed until at least 3:00 PM while cleanup crews are working in the area. DEP and the Town’s Water Department have determined there is no effect on the Town’s drinking water due to the minor amount of fuel that was spilled and the quick response of containment, and clean up. Any questions should be directed to Lt. Eric Foulds at the contact information listed below.