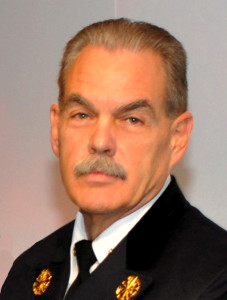 Chief Parow received his Master in Business Administration from the State University of New York and a Bachelor of Science in Fire Engineering and Safety Technology from the University of Cincinnati. He has many certifications, his numerous writings have been published in Professional Fire Publications and he was appointed by past Homeland Security Secretary Janet Napolitano to serve on the Homeland Security Science & Technology Advisory Committee.

“I am honored to have been chosen to serve the City of Haverhill as their Interim Fire Chief,” Parow said.

“I look forward in working with the City, Mayor Fiorentini, Chief DeNaro and Firefighters’ Local 1011 to help an already respected department be the finest in Essex County.”