By ValleyPatriot on September 16, 2011Comments Off on Hero in our Midst: Staff Sgt. John Katsaros, WWII – Part 1 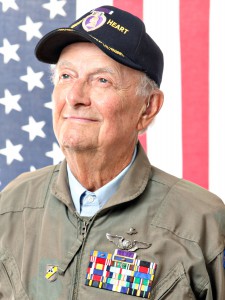 At 30,000 feet, under heavily overcast skies and turbulent winds, two B-17s collided over the base.

Formation flying over Germany was impossible. Miraculously avoiding a B-17 that plunged out of control, the pilot dived thousands of feet. On regaining altitude, he lost formation. The bombers were recalled to another target but due to radio silence all turned back except one.

He kept going to Frankfurt. Alone.

While successfully bombing their target, the B-17 was hit by 88mm anti-aircraft fire, losing two of four engines. Five ME-109s strafed the bomber, chasing it to France—but the crew shot down three of them. Outside Reims, their plane exploded in flames—seconds after the crew bailed out!

In the darkness–a beacon of hope

Yet what appeared to be “a mission to hell” turned into a drama of divine intervention and miraculous escapes.

Although France had surrendered to Germany in 1940, the darkness could not quench the spirit of freedom.

Out of the darkness of despair, the French Resistance arose like a beacon of hope—one of the greatest mass movements of freedom-fighting patriots. For downed American and Allied airmen, it meant the difference between life—and death.

Because of their sacrifices, John Katsaros is alive today.

He took part in the massive operations that blitzed Germany—the “Big Week,” February 20-25, 1944—“the largest and most successful missions ever run.” For their role, the 401st received two Presidential Distinguished Unit Citations, for raids against Leipzig and Frankfurt.

The day his plane was shot down, four crew members were KIA, Katsaros’ body was riddled with shrapnel, his mangled right arm hung paralyzed. Yet before bailing out, he wrapped his scarf around the neck of a fellow gunner, hemorrhaging from a severed artery, and helped him bail out.

With seconds to spare, Katsaros bailed out at 27,000 ft in a 25,000 ft free-fall, losing consciousness. But first he said a fast prayer. 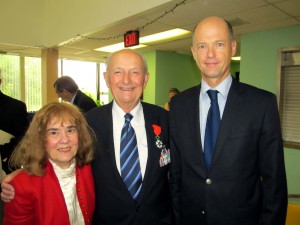 Valley of the shadow of death – His prayer was answered.

He landed on the “Bonne Maison Farm.” Alive, but shattered with six broken ribs, a fractured left ankle, a badly twisted and sprained right ankle and severe contusions to head, back and leg.

A farm worker saw him and carried him to the farmhouse.

Then the Gestapo arrived . . .

Thus began “the long escape”— a three-month, 3,000-mile journey from the north of France to the south, climbing the Pyrenees before reaching Spain, then Gibraltar and freedom.

Thanks to the French underground, Katsaros survived. They whisked him from one safe-house to another, often right under the nose of the Gestapo!

The Germans offered a $10,000 reward for Katsaros.

Twice the Gestapo captured him! After his bail-out, and later when an undercover German collaborator betrayed him.

Each time the French Resistance stormed the scene, guns blazing and rescued him!

John Katsaros literally walked “through the valley of the shadow of death”—and beyond it to life.

Katsaros took on many disguises. He was a cell leader’s deaf-and-dumb nephew injured in a Paris raid, a French “gendarme,” complete with uniform and cap that walked the beat with his rescuer and a French citizen, with papers and photo expertly forged.

Through it all, the brave men and women of the French Resistance sacrificed their lives and endured torture to save his life. Among his many angels of mercy:

• The underground doctor, a French Jew, who performed three surgeries in three days on his right arm, with little or no anesthesia available! When he advised amputation because gangrene had set in, the Resistance leader pointed a pistol at his head and shouted, “NO!” Katsaros’ arm was saved.

• The elderly woman who came daily to feed him, though fearing for her life. Her son was a German POW.

• The family who loved and cared for him like their own son, when he was weak and emaciated. His extended stay put their lives at peril.

• The men who hid him in a winery’s storage cellar, deep underground.

• The farmer who hid him in a covered dry well, 20 to 30 feet underground.

Above him, Katsaros heard the Gestapo interrogating the farmer!

Often the Gestapo looked right at Katsaros without “seeing” him.

Once he laid crumpled in the street, while German soldiers strolled by.

On Easter Sunday, he received Holy Communion in a church filled with German soldiers. Not one “saw” him. Later he celebrated Easter dinner with three Resistance leaders and their families. Before eating, “we had special prayers, rejoicing in the resurrection of our Lord Jesus Christ.”

The unexpectedly long, four-day, four-night trek, with a Basque guide, across the Pyrenees into Spain was grueling and torturous. The trail circuitous, rated “severely difficult.”

No food. Virtually no water.

Since Katsaros’ right arm was useless, others often pulled him up, using a branch.

Worse yet, he had only dress shoes, two sizes too small! His feet became cramped and frozen. The soles wore thin. Over snow-covered rocks and steep, icy slopes they hiked, fording rivers with stony beds.

Yet he kept walking. One step at a time. In faith.

Weak, exhausted, weighing 87 lb, Katsaros told the others to go on without him. They refused. “You’re one of us. We will not leave you. See, we’re getting closer to freedom. We’re all going to make it.”

Someone slipped him two sugar cubes. Their kindness kept him going.

Finally, they reached Spain. Another lockup. Another rescue. Freedom at last!

The Light shines in darkness

What sustained a 20-year old in such fiery trials? John Katsaros says, “Faith in God, knowing He was always with me. That gave me courage to act in the face of death. I firmly believed He always heard me when I prayed. He sent His people to save my life. When you experience the miracles of God, you know!”

As the Apostle John wrote, “The Light shines on in the darkness, for the darkness has never overpowered it.”