By Tom Duggan on May 6, 2011Comments Off on Hundreds Rally to Save Saint Mary’s School 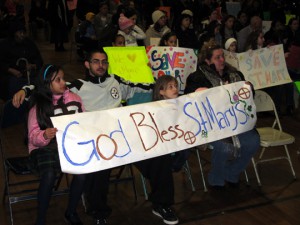 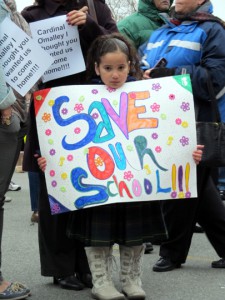 Hundreds of students, parents and supporters of Saint Mary’s School of the Assumption in Lawrence, rallied and held a vigil Saturday to oppose the decision of the Boston Archdiocese of the Catholic Church to close the school at the end of the school year.

Student’s and parishioners held signs that read “save our school” and “We Love Saint Mary’s”, chanted, sang religious songs and waved at passing motorists on Haverhill Street.

Parishioners complained that the Archdiocese had plenty of money and even increased funding (nearly double) for the catholic school in South Lawrence, Lawrence Catholic Academy.

Saint Mary’s parishioner Pedro Diaz addressed the crowd which had made its way inside the school gymnasium. Diaz, a Lawrence resident, said that he believed the decision was that of the Boston Archdiocese but could not take effect without the support of Cardinal O’Malley.

“What we can accomplish is, we want to send a message to the Cardinal,” he told The Valley Patriot. “ you can’t spend $35,000 on this school? But you can spend twice that much on the other school in South Lawrence? They’re getting so much more. So, there is the money. ”

A press release was issued by Jay Jackson and Antonio Vega, (members of the school’s board) entitled “Saint Mary of the Assumption School Closing! The Truth be Told!”

“Lawrence Massachusetts residents are outraged about the fact that the only Elementary Catholic School, St. Mary of the Assumption, in the North side of the city has announced that it will be closing its doors June, 2011.

The news has come just 2 months before the end of the school year. This will impact 270 families who are registered at St. Mary of the Assumption school and plan to continue for the 2011-2012 school year.

The Community of St. Mary of the Assumption Parish is demanding answers from the Boston Archdiocese in particular, Cardinal Sean O’Malley.

“We want to know why if the Catholic School 2010 Plan took into account the ethnic, economical and social differences called for the initiative of two catholic schools in Lawrence, one in South Lawrence and the other in the North, and we are now blind sided with the news of the closing of the school in the North? 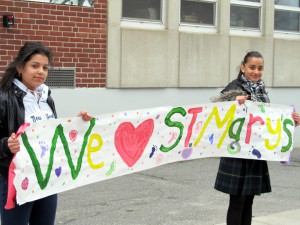 That would leave the Lawrence Catholic Academy in the south to which the majority of the students from the north can not financially afford nor do they have the physical space to accommodate them.

No decision would have been made without the approval or influence of Cardinal O’Malley. The Lawrence community, while a very poor community, will not continue to be ignored and allow decisions to be made on our behalf without the opportunity to have a seat at the table, so that we can provide input and help plan our future.

We deserve to hear the truth regarding why we are not entitled to have a Catholic school in out area where our children will get a faith based education. We will not add this incident to the list of times that we have been marginalized and disregarded as citizens and human beings with rights.”