If You Are Not With The Collective, You Are Disruptive

By ValleyPatriot on June 9, 2018Comments Off on If You Are Not With The Collective, You Are Disruptive 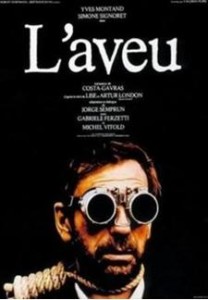 In April 2018 historians in Prague rediscovered original footage from the notorious Slánský show trial. Said the historians, “One day, when we can make it available for the public, you will be able to see the facial expressions, people’s movements, the body language and the staged performances. Because this was nothing to do with due process.

It was all rehearsed.” Which is why progressives stole the reels when their regime collapsed in 1989. Slánský’s co-defendant, Artur London, survived and wrote a book about the “process” of fabricating a show trial, which became a celebrated Costa-Gavras movie – The Confession – with Yves Montand and Simone Signoret playing husband and wife. Progressives banned it of course.

The same applies to show trials staged by Charlie Baker’s state medical board. I was put through one that was almost the real Slánský, and closely witnessed another. The system depends on coercing a confession from the targeted doctor. Confess! Confess! Just as in progressive regimes, the doctor’s lawyer invariably railroads the target on behalf of the state. The doctor is threatened with immediate license suspension, and public tarring by the compliant press who always quote the state’s press release as the truth. Most doctors quickly fold, falsely confess, and many then, appalled, commit suicide.

The doctors’ suicide response is no different from the targets of the original show trials (like Slánský himself), as respected persons who occupied society’s upper rungs, had contributed to the nation for years, had made many personal sacrifices, saved many lives, and now were tortured by illiterate thugs who couldn’t survive in the private sector as independent professionals, slandered and demonized by actual lowlifes who were drug addicts and now live as rent-seekers.

This state, like those progressive regimes, hates talking about these suicides and would love to adopt their practice of treating suicide statistics as state secrets. Try asking Charlie Baker for those suicide numbers.

The illiterate employees who populate the state medical board know no medicine, and are committed solely to making a fabricated false narrative the state record. To achieve that, they block the target from earning a living, the Massachusetts equivalent of solitary confinement, sleep deprivation and beatings on the soles. Want your license back? Confess!

The difference between the originals and Charlie’s show trials is that these occur in the United States, albeit in progressive Massachusetts. Meaning, America still bleeds through. And the occasional target, unlike most, still remembers he is American and refuses to loyally confess that the state (party) is always correct.

This happened in the 2016 Schwartz show trial. Charlie’s employees fabricated as false a case as Slánský and tried for months to get the doctor to confess. When he would not, Charlie’s illiterates had to fabricate a show trial.

And here is where America intervened. America allowed Dr. Sheldon Schwartz to prove that Charlie’s show trial was based on some policy that had no legal existence and may not be used to take away his livelihood. Charlie’s policy originated from Dr. Lucian Leape, who worked for two decades to turn American medicine into a collectivist system, like in progressive regimes, and encouraged the state to demonize doctors who remained American in their approach. Progressives have always loved forcing the learned to become taxi drivers.

If you are not with the Collective, you are a Disruptive.

Because Dr. Schwartz insisted on bedrock American principles, violating which harmed an entire class, Charlie’s Stalinist show trial screeched to a halt without a verdict.

Chief Magistrate Ed McGrath, one more of Polito’s hacks who abandoned his solo law practice with grateful alacrity, still has not released the verdict. Massachusetts law, ch. 7, § 4H, required him to release it within 90 days of the trial ending. We are 500 days past that. The Boston Globe attended the Schwartz show trial and stays silent to help Charlie out.

Charlie’s people haven’t figured out how to resurrect his Stalinist show trial and overcome his fundamental problem: his state is still within the United States. His people can’t bring themselves to publicly admit that theirs was a show trial all along. But because this still is America, and Dr. Schwartz is not dependent on the state for a job, an apartment or food, they just don’t have enough of a hold on the target.

This is progressive Massachusetts under Charlie Baker, who owns the state board as much as the State Police: “Stuff that goes on during my watch belongs to me.” Nothing better may be expected.

Bharani Padmanabhan MD PhD is a neurologist who specialized in multiple sclerosis in the Boston area till the state stole his medical license in July 2017. scleroplex@gmail.com