By Tom Duggan on October 30, 2012Comments Off on Judge Issues 2nd Order – DiAdamo Payments Not Privileged 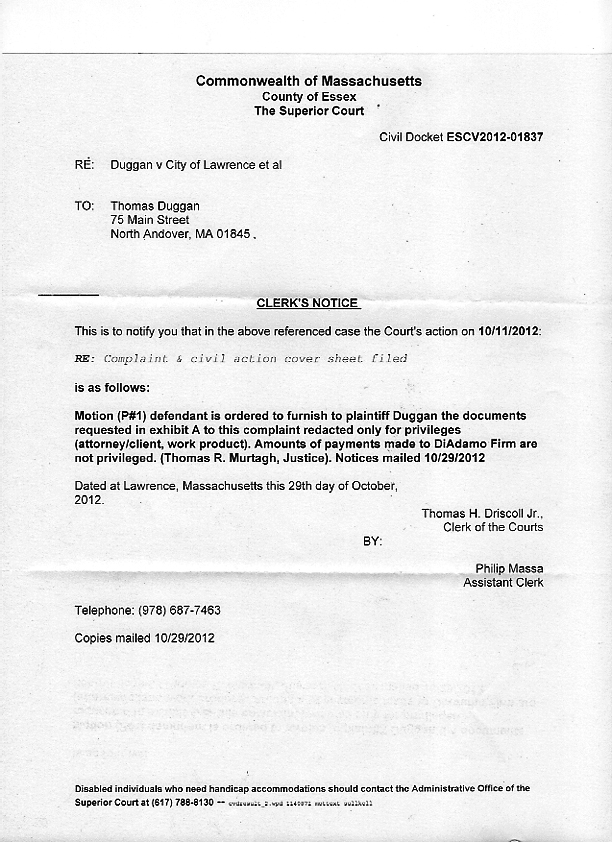 Essex Superior Court Judge Thomas Murtagh has once again ruled that the City Of Lawrence must turn over public information that the Valley Patriot has been seeking since February.

Lawrence City Attorney Charles Boddy had refused to turn over public records sought by the newspaper concerning School Department employees and payments made to a law firm that does legal work for the city and also serves as landlord to the Lawrence School Department Central Offices behind city hall.

After being ordered by the Secretary of State’s Office and Judge Murtagh, Boddy released the school department information but blacked out the payments made to the DiAdamo law firm in violation of MGL Chapter 66 and Judge Murtagh’s ruling. Boddy claimed that the payments were “attorney client privilege” despite the fact that the DiAdamos get paid with tax-payer dollars and handle public cases for the city.

The Valley Patriot filed a contempt motion which was granted by the judge who, once again, ordered the city to release the amounts paid to the DiAdamos.

In Monday’s ruling, Judge Murtagh ordered The City of Lawrence to release the documents un-redacted.

“Amounts paid to DiAdamo Firm are not Privileged,” Murtagh ordered.