By Tom Duggan on September 15, 2017Comments Off on Lawrence Cops Arrest Gang Member 2nd Time in a Week After Lawrence Judge Frees Him on Gun Charges 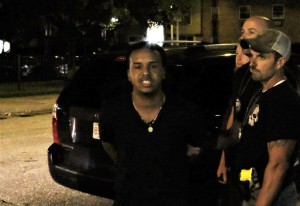 Lawrence Police and the State Police Gang Unit arrested a known gang member on Chestnut St. in Lawrence last night for the second time in a week.

Yorro politely protested his arrest saying he was being harassed by police and that he was visiting his daughter. The mother of Yorro’s daughter was on the scene and told The Valley Patriot that Yorro wasn’t doing anything wrong and that there was no written order banning Yorro from the property.

“How can I be arrested for trespassing without a written order?” he asked police.

“All I want to do is see my daughter,” he said multiple times.

Yorro was cooperative and did not resist arrest.

Lawrence Police and the Massachusetts State Police Gang Unit told Yorro that he was warned by property management to stay off the property after he was arrested last week on firearms charges.

Yorro did not have a license to carry.

*Hollow-point bullets are designed to expand once hitting someone’s body to create as much damage as possible.

One police report detailed how the previous arrest on Sept. 8th took place.

“Based on our recent crime report and call for service, officers concentrated on known hot-spots for gang activity along with locations of recent “shots fired” calls. One of the locations we have received numerous calls from was the Lawrence Housing Authority Management. They have complained about gang activity and large groups congregating around the properties. Officers made their way to this location and immediately observed a large group gathered in front of 380 Chestnut St.  Officers encountered these individuals and immediately observed known gang member of the gang called [REDACTED]. Members of these street gangs have been involved in numerous recent shootings/homicides within the city of Lawrence. “

The report also states that one of the Lawrence Police Detectives recognized Yorro as a known gang member and warned fellow officers that he was “known to carry a firearm”.

State troopers patted down Yorro and discovered the 9.mm Ruger. Police report that the gun was not stolen and the suspect was cooperative.

Lawrence Cops Arrest Gang Member 2nd Time in a Week After Lawrence Judge Frees Him on Gun Charges added by Tom Duggan on September 15, 2017
View all posts by Tom Duggan →