By Tom Duggan on February 27, 2014Comments Off on Lawrence Exchange Club’s 2014 Firefighter of the Year Award, Lawrence 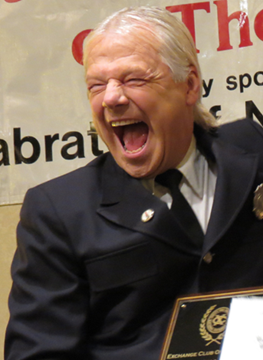 The Lawrence Exchange Club honored EMT’s, firefighters and police officers from Andover, North Andover and Lawrence for their contribution to public safety in the Merrimack Valley. The annual award ceremonies were held at the Wyndham Hotel in Andover Wednesday evening. The event is sponsored by Scott Emerson and Wheelabrator Technologies in North Andover.

The Exchange Club honored Lawrence Fire Inspector Frank “Ski” Skusevich is a 25 year veteran firefighter. Skusevich was doing a routine smoke detector inspection in South Lawrence when he heard the call go out on the radio that there was a person in the river on his radio at about 10:20am one Wednesday morning.

“First a special thank you to the Exchange Club and Wheelabrator, it’s very nice what you do,” said Fire Chief John Marsh.

“My name is John Marsh, proud to be the head counselor at that crazy camp known as the Lawrence Fire Department. Tonight we honor Frank Skusevich, known as ‘Ski’, and in the interest of time we will call you Ski from now on.

Marsh recounted how “Ski’s had pulled a man out of the Merrimack River in May of 2013 saying that Skusevich had been doing home inspections in South Lawrence when he had heard the radio dispatch that a man was in the river near the falls from a tipped canoe. 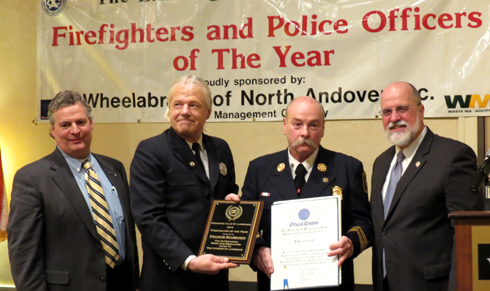 While firefighters were trying to respond , Chief Marsh says that they were having problems getting the boat working so “We were already at plan ‘B'” the chief said, adding that they were putting on immersion suits and were going to try and reach the man from the water.

“Frank Skusevich was not working with us at the time, he’s an inspector and was working up river doing a home inspection [for] smoke detectors, things of that nature. He had no firefighting gear or anything like that, he is in the administrative part of the (department), he was not part of the fire suppression at that time.”

“All of a sudden we hear Frank on the radio and he says he is coming down river in a boat. It turns out he had heard it [on the radio] and had gone to the boating program in Lawrence and surprised this poor gentleman who was working on the boats at the dock, commandeered a boat, almost cost the guy to lose his job, and he is coming down river… in the prow of the boat just like in one of those old movies.”

Skusevich pulled a 72 year old man into the boat from the cold water and brought him to shore.

I put him up for the commendation as did the past Chief Bergeron  more for the fact that he used his own volition and he really thought this thing out. He did what he didn’t have to do. He was able to formulate a plan and bring it to a successful conclusion. For reasons like that I think he should be nominated… on the other hand he broke every rule in the city…  but that’s Frank.” the chief concluded to laughter from the crowd.

After posing for photos Skusevich commandeered the microphone in a move unprecedented at the annual award dinner.