By ValleyPatriot on August 12, 2015Comments Off on Lawrence Mayor Rivera Opposes Sanctuary Cities, But Will Not Veto Council’s Decision 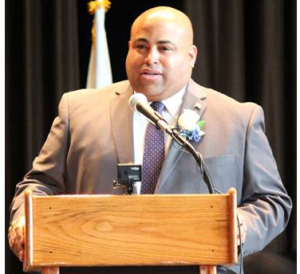 Lawrence Mayor Dan Rivera said Wednesday that even though he opposes making Lawrence a sanctuary city, he will not veto the city council’s vote Tuesday to stop criminal illegal aliens from being deported when arrested by Lawrence Police. Rivera said in a long statement (below) that vetoing the council’s decision will only drag out the process of an inevitable conclusion. The Lawrence City Council vote was 7-2, one vote over the 2/3 majority to override a veto by Rivera.

HOW WE ARE BUILDING REAL TRUST IN LAWRENCE

Mayor Daniel Rivera’s Statement on the passing of the Lawrence Trust Act.

It’s important for people to know that as a son of an immigrant and Mayor of the immigrant City of Lawrence I do not support any immigration policy that focuses on building walls and persecuting the undocumented currently living in our communities. I believe the state of MA should allow undocumented people to get drivers licenses, and finally I support the President’s executive order on immigration.

I start every conversation about immigration by saying the Federal government has abdicated its role in providing clear, well-funded immigration policy.

What does happen is that people who are undocumented and commit serious crime do get reported to ICE and I want the message to be clear: If you commit a crime, regardless of your immigration status, you will be prosecuted to the fullest extent of the law. I can’t support any effort that takes tools off the table for our police department that already has a tough enough time fighting crime in our City. From domestic violence to drug crimes I want our police force to have the power they need to fight crime and help victims.

Often, government tries to pass legislation and sometimes it is successful and other times it is not. I am pretty sure that government, especially at the local level, cannot legislate trust. What we can do, is focus on the hard work of earning the trust of the community. Lawrence is an immigrant City and will always be a diverse community.

Even though I do not support the “Lawrence Trust Act” my administration will remain focused on the real work of building trust and making sure that Lawrence will always be a welcoming place for the documented and undocumented to begin their journey towards the American dream. We are building trust in the community every day. Since becoming Mayor we have implemented many policies, procedures, tactics and trainings with in our police department to gain the real trust of the people of Lawrence. For the first time in my memory we have a REAL Police complaint process. A process that is known to everyone; and if you have any real problem with a police officer you can file a complaint and it will be dealt with seriously, it can even be filed anonymously.

This new complaint process will result in real discipline and action taken against bad police officers.

In the past, records were only kept when an officer did something bad and was caught dead to right, any complaint that found no bad action on the part of the police officer was ever recorded. Today, every complaint that is filed is in a database to watch for trends and red flags amongst our officers. The database gives us a view into what personnel are in need of training and which we need to give more supervision. We built a system to catch the bad officers doing bad things and disciplining them to include firing them if need be. That is a way we build trust. We are building trust in the community by providing training on the use of force. Chief Fitzpatrick enacted an action plan to ensure officers under his command were trained and knowledgeable on the use of force policy and modern day use of force tactics as set out by the Massachusetts Police Training Council, with de-escalation at its core. This included an 8 hour MPTC training course and a 2 hour in-house in-service training. The training reviewed court cases around the use of force, emphasized the proper use of deadly force as authorized by MPTC, and taught appropriate, thorough and transparent report writing. The use-of-force guidelines and chart have been prominently placed throughout the police station and officers were each given reference guides for personal use. We are building trust in the community by actually going door to door in the community with uniformed officers, and talking to people and getting to know them before anything bad happens. We are engaging them at their home so they can have a name and face to attach to our police. We are building trust by reviewing call taker interactions with the community and disciplining them when they do not treat people with respect and when they do not give bilingual residents the services they deserve. This is how we will continue to build trust in our City.Lastly, we are in the process of making sure that the restraining order process in Lawrence provides REAL protection to victims.

In closing, I DO plan on signing the support for the Safe Driving Legislation and plan on speaking directly to the Governor and Legislative leaders on getting real traction on its passing in this or the next legislative session.

While I do not support the Trust act passed by the City Council I will not veto the measure. I will let my 10 day review process expire without signature.

I know that this will mean the Ordinance as passed, will be in effect, but a veto by me that will ultimately be overturned by the city council only drags the city and our residents through another long and divisive voting process that benefits no one. The message was clear for its support and I will not stand in its way.

I repeat that government, especially at the local level cannot legislate trust. What we can do is focus on the hard work of earning the trust of the community. Lawrence is an immigrant City and will always be a diverse community. Everyone should know that my administration will remain focused on the real work of building trust and making sure that Lawrence will always be a welcoming place for all immigrants to begin their journey towards the American dream.