By Tom Duggan on September 5, 2021Comments Off on Lawrence’s Own Bylli Crayone: The Undisputed King of Dance 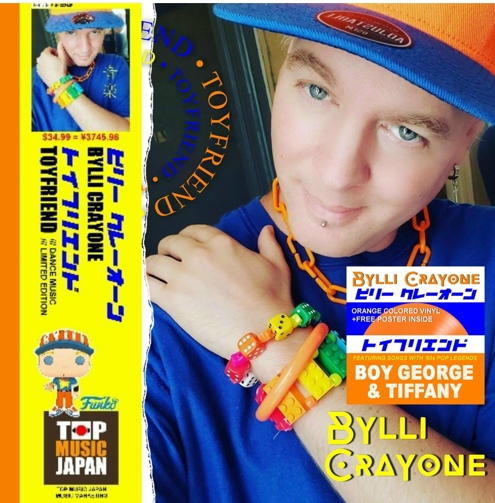 There is a lot of talent within the Merrimack Valley, but when it comes to ‘Dance’ music, Bylli Crayone holds the crown as the King of Dance.

Whether it be Freestyle, Club, Trance or Pop Music, Bylli has done it all. He’s even got a Merengue song out there. Over the past few decades Bylli has made a name for himself within the dance music community. Fans from all over the world support his music.

From the Freestyle Community to the Gay Community and everyone else in between. Dance Music has no limits. It has a wide range audience and has an appeal that many can adapt to.

The new album release ‘TOYFRIEND” is a Milestone album celebrating his 30 years in music as an independent artist. The album is a collection of songs that have been recorded over the years. Compiled exclusively for this album release.

Songs include the 1991 release of ‘Girl Hang It Up!’ which was the song that started it all. The album also includes collaborations with 80s Pop Legends BOY GEORGE and TIFFANY. The Digital & CD release both have 12 tracks while the limited-edition Japanese vinyl pressing only has 8.

These Funko Pops are limited to 20 and are Exclusive to this vinyl album release in Japan. The Vinyl and CD can both be purchased online at CrayoneMusic.com Support your local artists.

Lawrence’s Own Bylli Crayone: The Undisputed King of Dance added by Tom Duggan on September 5, 2021
View all posts by Tom Duggan →