By ValleyPatriot on April 23, 2015Comments Off on Mad Men: One of TV’s Greatest Dramas Says Goodbye ~ TV TALK with Bill Cushing 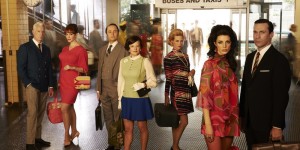 April 5, 2015 marked the beginning of Mad Men’s final season when it premiered on AMC at 10 pm. Mad Men will undoubtedly go down as one of the greatest television dramas ever created.

In my opinion, Breaking Bad is the greatest drama series of all time, but Mad Men is at least in the conversation for #2. If anyone knows me and know how much I love Breaking Bad, that’s high praise.

The series has helped to revive the fashion and pop culture of a tumultuous decade, while also reminding viewers of the racism, sexism and selfishness that was endemic to one of the most scrutinized eras in American history.
People that don’t watch the show say it seems boring. I try to tell them that even when nothing is happening, the show is mesmerizing to watch. You really can’t take your eyes off of it.

The show, about a Madison Avenue ad agency, is seen largely through Jon Hamm’s Don Draper, but also paints a rich picture of a dozen other lives, most notably Elisabeth Moss’s Peggy Olson.

Jon Hamm is excellent, no doubt, and Elisabeth Moss may very well be the shows MVP, but for my money the best character on the show is John Slattery’s Roger Sterling.

Roger had his best season last year with losing his long time partner Bert Cooper and dealing with his daughter joining a cult. We never really know how much it affected Roger until season seven’s midseason finale. A brief, meaningful shot of him watching the moon landing with his son-in-law, grandson, and estranged wife Mona brings the arc to a close—they’re a fractured family brought back together by the absence of his daughter. It took someone else’s lack of responsibility to force Roger to finally step up and accept his own. He’s still the same old Roger in a number of ways, but the loss of Bert hit him hard, and his losses have changed him.

Hamm’s Don Draper is another story completely. He is one of the greatest TV characters ever. He’s an anti-hero, someone who is very capable of being a better person but just isn’t. He’s quite literally led a dual life, spending the first half of his life as Dick Whitman, and then becoming Don Draper. He’s a womanizer, a drunk, and not a great father. He has shown moments where you thought he may be turning the corner and becoming a better person. The end of season 6, for example, when he opened up to his daughter about his past, showing her where he grew up.
Many theories have been floating around about how the show will end, will any characters die etc. Everything from Charles Manson making an appearance, to the whole show being a metaphor for the Vietnam War.

No matter how it ends, one thing is certain, TV has become much better because of Mad Men. People who are TV fans today can thank Mad Men for the slew of excellent programs out there. This series led the way. It made actors, writers, and directors want to be better. It made the industry realize that great stories can be told on TV, and not just in the movies.

It made AMC, the once afterthought of a network, a significant player in the world of original programming and won four consecutive Emmys for best drama series. Combine that with groundbreaking writing, and perhaps the finest ensemble cast ever assembled and Mad Men will truly be missed. It’s been a truly phenomenal experience watching Mad Men for 7 seasons, and I can’t wait to see how it ends.

Do you have any questions about TV? Email me at BillsTVTalk@gmail.com. I will answer all of your questions and will feature some of the questions I receive in a future column. Follow Bill on Twitter @TVNewsandNotes and on Facebook at TVNewsandNotes for daily up-to-the-minute TV news and discussion. www.tvnewsandnotes.com