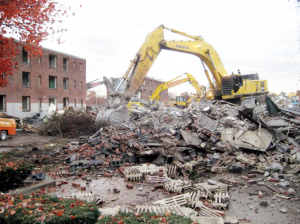 BOSTON – The Massachusetts Department of Environmental Protection (MassDEP) has penalized NASDI, LLC, a contractor hired to conduct demolition work at the Old Colony Housing Project in South Boston, $41,150 for asbestos and demolition violations. NASDI is a Massachusetts-licensed demolition contractor with a local office at 1365 Main Street in Waltham.

NASDI submitted and received approval from MassDEP in October 2010 for a proposal to conduct a contained and controlled demolition project on multiple buildings at the corner of General Josef Pilsudski Way and Columbia Road in South Boston.

MassDEP conducted a routine inspection on November 18, 2010, and observed the following violations of the approved plan: workers had improperly removed and handled asbestos-containing materials; workers were creating visible emissions due to inadequate dust control; an air-monitoring pump was not operating; a truck decontamination station was not being used; and, barriers to keep out unauthorized personnel were not present and there was insufficient signage to warn residents and visitors of an asbestos hazard.

“The plan the contractor submitted, if implemented properly, would have protected workers and residents from the threat of exposure to asbestos-containing materials,” said Eric Worrall, director of MassDEP’s Northeast Regional Office in Wilmington. “The failure to follow that plan posed an unacceptable level of risk, and resulted in the operation being shut down until those violations were corrected.”

Under the consent order, NASDI will pay $25,000 of the penalty and the remaining $16,150 will be suspended pending continued compliance by the contractor over the span of one year.