By Tom Duggan on November 25, 2013Comments Off on Mayor Elect Rivera Names Chief of Staff while Lantigua Concedes Defeat on Spanish Radio

“But we are leaving the city, at the beginning of the year, very proud,” Lantigua said.

“Those who are not blind of conscience, as I always say, will have to conclude that we have a much better city today than when I came into office.”

“We came into a financial fiasco with a deficit of almost 30 million dollars. We came in and balanced four budgets, the first one as you know very difficult, laid off police and fire, got into a lot of political problems, but since those days we balanced three more. Each one of those budgets we came out with some pluses in the water enterprise and the general fund. That’s something the city hasn’t seen fo close to 25 years.”

“It’s a much cleaner city, it’s safer. there’s a lot of good that we can show. Those who are not blind of conscience they don’t have to read about it they see it.”

He also pointed out that Moody’s has upgraded the city’s credit rating twice, though he neglected to say that a State Receiver from the Massachusetts Department of Revenue has been running the city’s finances since Lantigua took office in 2010.

At the conclusion of he interview Lantigua could not resist one more chance to play the race card saying “If my name was John Sullivan, and I looked, maybe like some of you,” he said pointing to the white reporters, “My face would be on the front page of Forbes Magazine, or Money Magazine. because of what we have done here as an administration.” 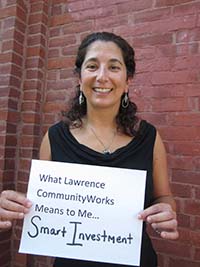 While Lantigua was catering to his Spanish speaking political base on LaMega radio, Mayor-elect Rivera was busy putting together his new administration as he readies to take office in January.

Lantigua said on Saturday after the recount that he would not concede and was weighing his options, hinting at a court battle.

Lisa Torrisi is the sister of former North Andover State Representative David Torrisi. She works for “non profit” Lawrence Community Works (LCW) and has a Masters in Business Administration from Suffolk University.

Prior to her current position, Torrisi was a Sales Executive at Grossman Marketing Group, was a political consultant and campaign organizer for a number of candidates including her brother David. She has served on the Board of Directors of Family Services of the Merrimack Valley and the Essex Art Center, and she was a 2010 YWCA Tribute to Women honoree.

Torrisi graduated from the Brooks School in North Andover and received her undergraduate degree from Trinity College in Hartford, Connecticut.

A press release by Mayor-elect Rivera says Torrisi has raised nearly $2 million annually “in critical program funding” for LCW . Lisa Torrisi’s family has owned and operated Jackson Lumber & Millwork, since 1946, where she currently serves on the Board of Directors.

“Lisa has been a strategic adviser on all my campaigns, and has put together exceptional volunteer field operations to ensure each victory. She is an organized leader that really knows how to build a successful team,” Rivera said.

“Lisa grew up in the Merrimack Valley and developed her amazing work ethic and her love of this city by watching the generations before her. She is committed to Lawrence and its success, and I am fortunate to have her serve in my administration.”

Torrisi was visible throughout the campaign and played a prominent role in the recount last Saturday.

“It is a privilege to serve in this role, and I am looking forward to the new opportunities for Lawrence that will be created under the Rivera administration,” Torrisi said.

“Dan is an incredible leader that will bring Lawrence residents together, ensure professionalism throughout city government, and make thoughtful and smart investments to improve the city. I am honored and excited to be part of his team and look forward to getting started.”