By Tom Duggan on August 17, 2014Comments Off on Methuen Police Chief Solomon on Militarization of Law Enforcement: Defends NEMLEC 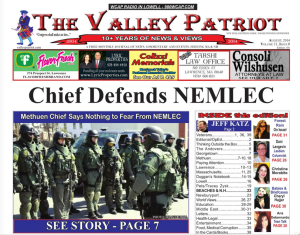 Methuen Police Chief Joe Solomon appeared on Valley Patriot publisher Tom Duggan’s radio program (Paying Attention!) on 980WCAP last month to talk about the city’s new “shooter detection system” being used in the Methuen Schools. During the interview the subject of over militarization of police and the NEMLEC team here in Massachusetts.

NEMLEC is a conglomeration of police officers from 54 different police departments trained to deal with crisis situations and are often used in hostage situations. NEMLEC has been roundly criticized by civil libertarian organizations and groups that hate the government. Because NEMLEC is considered a private organization, their books are not considered public record. This prompted criticism and a challenge by the Massachusetts ACLU. We asked Solomon during his radio interview to address the concerns people have about what some say is the over militarization of our local police.

TOM DUGGAN: Do you worry we are over-militarizing our police in urban and suburban neighborhoods? 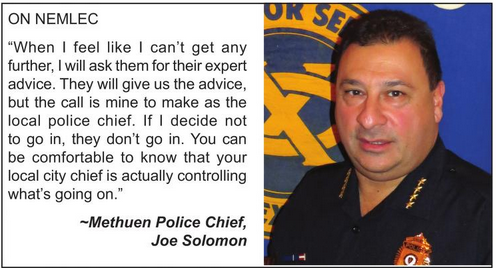 CHIEF SOLOMON: “I have concern, but I don’t have worry. What it all comes down to is, who’s in charge?

You have to have your trust in leaders. In this case, politicians should be watching over our law enforcement. I have never hidden from the press. We’ve had a go around in Methuen with some 1st and 2nd armament people, but we are open, we’re there, and it is a concern but here’s what I look at:

When we are actually out on the street and we are moving to a location where we know there are barricaded doors, and there are people inside who may be armed, we are either serving a warrant or trying to get in to extract a person. Why wouldn’t I want my officers behind an armed vehicle? Why wouldn’t I want my officers behind something that can stop a round?

Most of the old SWAT vehicles we used could stop a round or two, but that was it. These new armored vehicles will continue to stop rounds. Why wouldn’t I want my men behind bullet proof shields, wearing helmets as we approach? Why wouldn’t I want trained officers who know how to deal with this exact circumstance?

Twenty-five years ago, I remember going into a house on the west end of Methuen with another officer. We were told by our supervisor that a guy shot at his wife, he’s in the attic, go in and get him.

We had routine bulletproof vests, no armor, no helmet, with a .357 pistol. We both worked our way back to the guy’s attic and luckily, he put his hands up and put his 9MM semi-automatic weapon down and surrendered himself. But we were lucky.
Today we’d call the NEMLEC, or our special operations team that we have in Methuen all geared up behind armor, and let them go into the house. They are trained, they are expert shots, they carry flash-bangs, they are much better trained and equipped to deal with what’s on the streets today. This isn’t 25 years ago.

Of course there is a concern [about militarizing the police]. There’s always a concern, you would be crazy not to have a concern. But it’s that concern that keeps everybody straight, it keeps us doing the right things. As soon as we make a mistake and do something wrong, you can call us on it, and I will admit it, and we will correct it.”

TOM DUGGAN: The day you make a mistake though, someone dies. I think that’s the valid concern people have.

CHIEF SOLOMON: “It may be. It doesn’t necessarily mean when you make a mistake somebody dies. It can result in injury or it can result in no injury. But, we have to make the best decisions we can based on all our tactical training. You know, I have been criticized for twelve years because I don’t sit at the desk all day. I have heard ‘why are you out there on the scene? Why do you open yourself up to a liability?’

If you have your command staff or your chief, even the captains out at the scene, you have the oversight you need. That’s why we need to have trusted leaders in place.

But yes, there is a valid concern about over militarization of law enforcement. But, I would ask this: isn’t it just a response to what we are seeing? When did you start to see criminals on the streets with semi-automatic AK-47’s, or m4 rifles, or hand grenades … or pull over a car routinely that has six rifles and five handguns? If you look around the country, you see that this is what law enforcement is faced with every day.

You know what we used to see twenty-five years ago?

We saw five guys fighting and everybody had a gun, but they all had one gun. They were using handguns and mainly revolvers. Today they could have a handgun with a fifteen round magazine. I just saw a Glock .229 magazine, that’s a thirty round capacity magazine. So, everyone we deal with on the street could very well be possessing these weapons.

So if I go to a domestic call and there are two people at the domestic, I want four cops. If I go somewhere and you have a knife, I want a handgun. If you have a handgun, I want a rifle, if you have a rifle I want an armored vehicle. Law enforcement always needs to be one step ahead with the intent of keeping people safe.”

TOM DUGGAN: I’m a supporter of NEMLEC. I know a lot of the guys on the unit, and I understand that we need them because the cops are outgunned. But, when we look at this NEMLEC situation, they won’t even tell us what they are spending. They’ve created this semi-private, public organization and because politicians are in charge, the valid concern is that it can be abused. What is your experience? 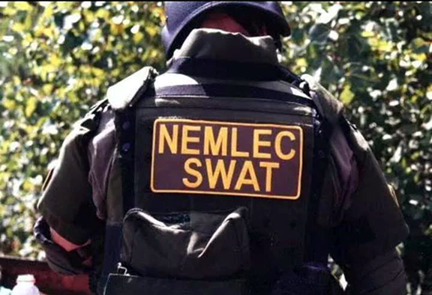 CHIEF SOLOMON: “I’m glad you brought that up because Methuen has been a charter member of the North East Massachusetts Law Enforcement Council since over thirty years ago. I sit on their board because all chiefs sit on their board. NEMLEC will not come into a community without the police chief calling them in. So, my mayor, my city council president, my local activists like Linda Soucy, they cannot call NEMLEC and say ‘please come in, we have a situation’.”

Based on their charter, when NEMLEC responds to Methuen as they have on many occasions, they are under the control and direction of the local police chief.

Asked about some of the charges by the ACLU and other organizations that the NEMLEC unit is a rogue, paramilitary organization that can go into any community and do what they want to do, Solomon said what he has been reading are only “half-truths”.

CHIEF SOLOMON: “They are giving you half-truths. It is a conglomerate of fifty-four different police departments and two sheriff’s departments. However, if I called them and said ‘I have a barricaded subject and I need a SWAT team to respond’, when they arrive there’s a SWAT commander. NEMLEC has three police chiefs, so one of them will arrive and ask me ‘what do you want us to do’. I could say, ‘I want to negotiate and I want everyone else to stand back’ and they will.

When I feel like I can’t get any further, I will ask them for their expert advice. They will give us the advice, but the call is mine to make as the local police chief. If I decide not to go in, they don’t go in. You can be comfortable to know that your local city chief is actually controlling what’s going on.”

NEXT MONTH: Chief Solomon talks about the drug epidemic and the overdoses in the Valley. Paying Attention! With Tom Duggan airs on 980WCAP in Lowell on Saturday morning’s from 10AM to noon. You can listen live on line at www.980wcap.com.