By Tom Duggan on December 14, 2014Comments Off on Methuen Robbery Suspect Hits 7-11 in Woburn Police Ask for Public’s Help 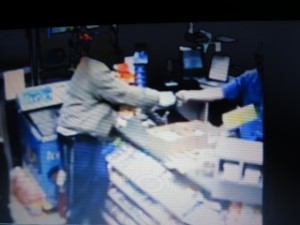 Methuen Police Chief Joe Solomon and Woburn Police say the same man who robbed the Mobile Station on Haverhill Street in Methuen yesterday also committed an armed robbery at a 7-11 in Woburn 45 minutes after the robbery in Methuen.

“I spoke with Detective Flynn in Woburn and we swapped photos of our robbery suspects and we both agree that it’s the same suspect.

Solomon says that dark skinned Hispanic male used a weapon in Woburn but did not show a weapon in Methuen.

At about 6:34 Sunday morning, Methuen Police say they received a 911 call from a clerk at the Mobil Gas Station, 214 Haverhill St., to report that a dark skinned Hispanic male, approximately 5’06 wearing a mask, entered the store, demanded money, made reference to having a weapon (none was shown) and fled with an undetermined amount of money. 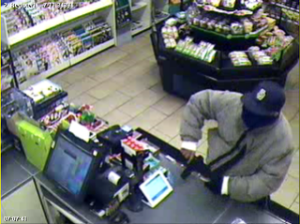 The clerk informed Methuen Police Officer Earnshaw that the masked subject made furtive gestures which lead him to believe he was armed.

Methuen Police Officers set up a perimeter, checked all area businesses and awaited the arrival of Dracut and Massachusetts and State Police K9 units.

State Police K9 dogs followed the scent of the suspect(s)for a brief time, toward the rear of Kentucky Fried Chicken. Methuen Chief Joe Solomon says Detective Pilz responded to the scene and will be the investigating officer for this incident.

A BOLO (Be on the look out) and teletype communication was sent out to are police as well.

At the same time Woburn Police report that they had a masked armed robbery approximately 30 minutes after the Methuen Gas station was robbed. Woburn Police say that they subject description appears to be the same or very similar.

Methuen Detective Pilz believes this may be related to another robbery in Lawrence.

Chief Solomon said he was glad nobody was hurt.

We are very glad, we got lucky nobody was seriously injured during the robbery and we are asking the public to contact s if they have any information at (978)  983-8677.