By Tom Duggan on July 11, 2017Comments Off on Methuen Police Looking to Identify Woman Involved in Fatal Accident, One Still Critical 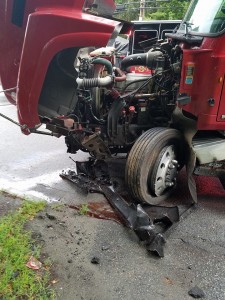 This morning at approximately 8:00 am The Methuen Police received several 911 calls reporting a serious motor vehicle accident that occurred on Riverside Drive near Strathmore Road in Methuen.

We responded along with the Methuen Fire department and paramedics. The Mass State Police Accident Reconstruction Team were also notified, and responded to assist our officers. The crash involved a collision between commercial trailer dump truck, a black Honda Accord and also an Acura MDX color red. Preliminary investigation concluded that Honda Accord was travelling east on Riverside Drive heading towards Lawrence. An Acura MDX was travelling in the same lane behind the Honda. Witnesses state that for an unknown reason, the Honda crossed the double marked lines, and collided head on with a commercial trailer dump truck that was travelling in the opposite direction. The Honda was then pushed back into the Acura MDX.

The operators of the Acura MDX and the commercial trailer dump truck were transported to an area hospital with minor injuries.

The operator of the Honda Accord was pronounced dead at the scene. The passenger was identified as Sunny Faretra, 31 years old, from Burlington, Massachusetts. She was transported to the Lawrence General Hospital and then transported by Med Flight to Brigham and Women’s Hospital in Boston, where she remains in critical condition at this time. At the time of this press release this crash is under investigation by the Mass state Police reconstruction and Officer Alarcon of the Methuen Police.

Methuen Police are working to identify the operator of the Honda, and are requesting that anyone with information on this accident to please contact us at (978) 983-8698.

A fatal accident on Riverside Drive in Methuen Tuesday morning could turn out to be a double fatality Valley Patriot sources say.

One witness to the early morning crash said she believed there was some kind of road rage as she drove behind one of the vehicles.

Other witnesses said the crash was so powerful it shook their cars in traffic and that the engine of one of the vehicles flew out of one car and hit a parked car not involved in the accident.

Sources at Holy Family say that one man is dead the woman who was brought in is in critical condition and they do not expect her to make it.