By ValleyPatriot on August 21, 2017Comments Off on Methuen Scout Recalls Attendance at Jamboree 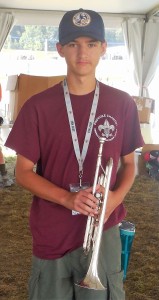 July 17, 2017 at 7 pm I was curious and kind of scared about going to the National Scout Jamboree. I was worried about that I was the only person who was going from my home troop, (Troop 76, Ballardvalle) and maybe the only scout who was going from the whole city of Methuen.

After photos and goodbyes, we loaded on to our three buses and took off. Of course, we had to watch movies to literally midnight. First, it started with Star Wars Rogue One, then it went to Ferris Bueller’s Day Off. After both movies were finished, we decided to get some impossible sleep on a tight bus.

Where are you from?

At 5 am Tuesday we finally made it to Washington D.C. We were directed to wear our Class A uniform, which is the full uniform. Since our Scout Master decided to do that to us, we stuck out like a sore thumb. First, we went down to Union Station to get food. Instead of getting fast food like Mcdonald’s, I went somewhere more healthy, Au Bon Pain. After breakfast, my troop met up and split up to go to different places in D.C. My group decided to go to some of the Smithsonian’s museums. Soon as we stepped out of the station, people starting asking us, “Where are you from?”

At first I didn’t care, but eventually I realized, I was proud to represent Massachusetts. The first Smithsonian Museum I went to was the Smithsonian Castle, mostly because it was air conditioned. After that we went to the Air and Space Museum. We ate lunch and then left for the Museum of Natural History. After visiting the museums we met up at the Capitol to board the buses.

Humidity, sun, and rain: Three things to describe the Summit Bechtel Reserve where the Jamboree was held. My troop arrived there on Wednesday. When we got to our campsite we saw 3 cargo like boxes carrying all of the things we need, tents, dining tent, and cooking gear. We got all the tents set up and had dinner. After dinner they let us go around and patch trade with other scouts. In the beginning everyone thought patch trading was boring. Of course, that quickly changed. Our troop had some really cool patches to trade. Our main council shoulder patch was a photo of Massachusetts with all 4 major sport trophies next to it.

Our special shoulder patch we got was a patch with the same Massachusetts photo but with the Patriots’ logo and on the top; it says 5x, reflecting our 5 championships. The first day was more of a day to explore than actually doing things. The only event I went to was the Rocks, which is rock climbing. On top of rock climbing they have something called the Leap of Faith. The Leap of Faith is a scout jumping off a 35 foot building on a harness. On the next day I went to laser shot, which is an indoor shooting simulator. I found it really cool and fun. Also, they gave us these really annoying turkey calls. The stadium shows were entertaining except for one. The first show had X Ambassadors play. The last concert was Plain White Tees, popular bands. They had that one hit song from 2005 called, “Hey There Delilah”.
Credit – John Corneau – The President is coming!

It was Saturday afternoon, I was patch trading with other scouts, when I heard a ding from my phone. I thought it was another one of those notifications about drinking water. But no, it answered the most thought about question that far in the Jamboree. Is the President going to show up?

The answer was yes. The President was going to give a speech on Monday. The only things we could bring in to the stadium were a water bottle, our phones, and a few snacks. The snacks were limited because we couldn’t bring apples or any whole fruit because they are “projectile fruit”.

We had to be back at camp by 1 pm. When we got to camp we had a shake down to see what people were bringing. After that we left the campsite and started the journey down to the AT&T Summit Stadium. When we got there, we had to go through metal detectors, and get our personal belongings searched. Security was stricter than anything I have ever seen. There were what looked like snipers on top of the zip line bases, Secret Service around every corner. We got our food and sat down and waited, and waited. In total we did 5 hours of waiting in the hot West Virginia sun. But when President Trump stepped on stage the whole stadium became electric. I could tell it was something more than just going out of respect for the office. People were chanting, “USA” and “Trump”.

Even though the BSA said not to chant, in the letter to Scoutmasters, people couldn’t stop it. After the speech, Scouts pushed giant balloons of the Earth up their stadium section. O boy! – that was a bad idea! When the ball came to my troop’s area, a huge pile formed because people were running through the stadium following the ball. One scout in my troop got kicked in the head and muscle sprain in his leg. Luckily there were some Army medics stationed nearby to help.

I also spent my time at the Jamboree playing with the National Scout band, Day of Service, zipping on the Big Zip Line, water obstacle course, and earning merit badges.

At 8 am my troop was all packed up and ready to go. At 9 we finally got on the bus to go home. We drove from West Virginia to Hershey, Pennsylvania. We stayed at the Hersheypark Camping Resort. On Saturday we went into the park, luckily we got in an hour earlier because we stayed at the campgrounds. I think on that day I had eaten a little too much chocolate. On Sunday morning we packed up and got ready to make the long trip back home. It was all smooth sailing until we got into Connecticut. We were ahead of time when one of the 3 buses broke down. We had to condense the 3rd bus passengers and gear, into the other 2 buses. That put us back an hour or two. We finally got home on Sunday at 6 pm. Overall, the jamboree was a life changing experience that I won’t forget for the rest of my life. Right now I am thinking about going to the World Jamboree in 2019.