By Tom Duggan on December 26, 2015Comments Off on More than 300 Needy Children Wake up to Find Christmas Presents Thanks to Methuen Police, Fire & Teen Volunteers at Debbie’s Treasure Chest 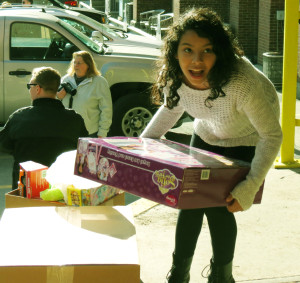 Hundreds of needy and underprivileged children in Methuen were shocked yesterday morning to find a present under their Christmas trees, thanks to the efforts of the Methuen Police, Fire, and the volunteers at Debbies Treasure Chest, which is headquartered in Lawrence.

Methuen Officers Derek Licata and Mike Blanchette, as well (as other members of the Methuen Police and Fire Department) held the toy drive for needy children and even enlisted the help of their own children to make it a family effort. 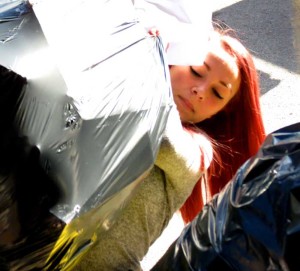 The teens helped officers and firefighters load dozens of bags and boxes of toys into cars and trucks at the Methuen Police station, then unloaded them all in Lawrence at Debbie’s Treasure Chest.

“Last year Linda Harvey came to me to talk to me about my daughters, Jessica and Juliana, running a toy drive through the Police Department, for needy kids in the Methuen area and the valley,” Officer Licata said.

“Now, both of my daughters have worked with Debbie’s Treasure Chest since it started. They volunteered for countless hours helping out at various locations when it first started out in the garage … eventually it grew and grew to what it is today. So, my girls were 100% on board. I asked (Officer) Mike Blanchette, one of my fellow officers here, and his daughters helped out as well. We teamed up together to facilitate this for the kids and let the kids run the toy drive.” 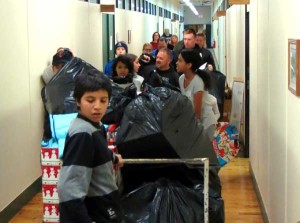 “We did our very first toy drive with Debbie’s Treasure Chest where each needy child makes a wish for each toy drive that we do. Each child gets one toy. Last year we did 150 wishes, this year we actually doubled our numbers and had over 300 children’s wishes granted. We are really somewhere around 310 or 315 donated toys. That doesn’t account for all of the donations that people dropped off at the police station lobby, City Hall, thanks to Mayor Zanni,  McLennan and Company (Century 21) and the other businesses that help sponsor this every year. They each had a drop box as well. We’ve had incredible community support.”

Licata thanked Chief Solomon and Fire Chief Sheehey “for their incredible support in helping us drive this event.” 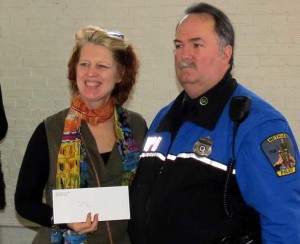 “This year we partnered up with the support of Fire Chief Sheehey, we brought Mike Fluet on board, who also brought his daughter Melissa, and we started this year with the goal of doubling the wishes that we did last year.”

“In addition, we reached out to the public to get as much help as we could for these children. All the toys were donated by members of the public in the organization helping though.”

Officer Licata says that a high school student contacted Chief Solomon directly this year, and asked if they could participate.

“So, the Methuen High School varsity hockey team, every single member of their team, came in and took a wish off the tree to grant a Christmas present to a needy child. It’s really is amazing.”

“This has gone so well that we expect next year to be able to have a tree at the high school for all the sports teams that want to participate and grant a wish, so we can help more needy children at Christmas time.”

Methuen State Representative Linda Dean Campbell (D), and State Senator Kathleen O’Connor Ives presented a citation to the volunteers to thank them for their hard work helping the needy at Christmas.

Linda Harvey of Debbie’s Treasure Chest could not attend because of a family emergency but was live via telephone listening in as Officer Licata thanked supporters and volunteers and talked about the toy drive effort.

Methuen Police Chief Joe Solomon told The Valley Patriot after the event that if other departments in the city, and other small businesses participate next year they could easily double this year’s donations to help 600 needy children in the Merrimack Valley get a Christmas present.

More than 300 Needy Children Wake up to Find Christmas Presents Thanks to Methuen Police, Fire & Teen Volunteers at Debbie’s Treasure Chest added by Tom Duggan on December 26, 2015
View all posts by Tom Duggan →