By ValleyPatriot on January 14, 2015Comments Off on Reflecting Back and Moving Massachusetts Forward ~ IN YOUR CORNER WITH SENATOR IVES 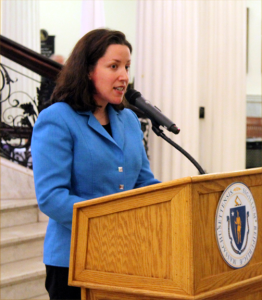 In my first legislative session we passed a number of significant laws, including requiring nursing homes, rest homes, or other long term care facilities to first obtain informed, written consent if psychotropic medications are to be administered, along with a description of the side effects. We also passed language-requiring pictures on electronic benefit cards (EBT) to help reduce fraud and abuse. The Department of Transitional Assistance began rolling out photos on EBT cards in November 2013, after lawmakers passed the new requirement aimed at cutting down on fraud and abuse. Under the law, DTA had up to 12 months to replace all EBT cards that require a photo ID.

Certain people are exempt from the photo requirement, including anyone under 18, the elderly, disabled or domestic violence victims. Although the U.S. Department of Agriculture officials have raised concerns about Massachusetts welfare recipients’ ability to access benefits because of the way the state implemented its photo ID requirement for electronic benefit cards, the state is working to educating retailers and welfare recipients about EBT photo criteria.

I also co-sponsored a bill that would make strangulation a felony and creates penalties of up to 5 years in state prison, up to 2 1/2 years in a house of correction, by a fine of up to $5,000 or by both a fine and imprisonment. Currently, strangulation is not treated as a separate offense and charged as assault and battery unless there is a proven intent to kill. The bill enhances penalties for strangulation when it causes serious bodily harm, is against a pregnant woman, there are subsequent strangulation convictions or if it is against a person who has a restraining order against the perpetrator to up to 10 years in state prison or 2 1/2 years in a house of correction and by a fine of up to $10,000. Of critical importance to removing obstacles to prosecuting domestic violence cases, this bill eliminates the option for charges to be dismissed through accord and satisfaction, where the victim acknowledges in writing that he or she has received satisfaction for the injury from the defendant. Victims often feel pressure from their abuser to reconcile and are not emotionally able to resist their demands making this provision inappropriate for domestic violence related offenses. This language was incorporated into a law strengthening the penalties for offenders and protecting victims of domestic violence.

I also co-sponsored a bill increasing oversight of public housing authorities which was signed into law earlier this year. The bill calls on the state Department of Housing and Community Development to implement training programs for members of housing or redevelopment authorities to instruct them on proper management practices and keep them up to date with laws pertaining to open meeting, public records, fair housing and fiduciary responsibilities. The department is also required to establish and implement a performance-based monitoring program, setting up uniform assessment standards for evaluating the operation of housing authorities, and establishing guidelines if a housing authority is not meeting guidelines.

This year, the deadline for legislators to file legislation for the two-year legislative session is Friday, January 16, 2015. I plan to refile a number of bills which made progress in the last session but have not yet been passed into law. One of the bills I intend to refile is relative to unsolicited loans. I filed An Act Relative to Unsolicited Loans in the last legislative session and this bill passed in the Senate. I aim to make continued progress on this piece of legislation in the upcoming session. This bill would prohibit banks, credit card companies, and other financial institutions from issuing unsolicited loans to consumers. Consumers commonly receive credit cards checks and other types of loans offers which were never requested. These solicitations expose consumers to identity theft and fraud, placing the burden on the recipients to properly destroy these materials so they are not misused. Prohibiting the issuing of these unsolicited checks will strengthen consumer protections.

To strengthen the public’s access to information, I will be also refiling a bill to implement fines on the custodian of public records for failing to comply after 30 days and until compliance occurs. In addition, a non-compliant custodian would be responsible for any court costs incurred after 60 days of the original request. Currently, there are no teeth in the law to hold someone accountable for not fulfilling a request for public records within the mandated time period. When members of the press experience difficulty in gaining access to public records, they are often left to incur high attorney fees and navigate the court system in order to get information that should be available to the public.

Another bill I will be filing would ban the practice of hydraulic “fracking” for fossil fuel deposits in Massachusetts and prohibit the storage, disposal, or treatment of wastewater from hydraulic fracturing or the toxic chemicals used in the fracking process in our state. Hydraulic fracking fractures rock by the use of a pressurized liquid comprised of water and chemicals and is injected into land borings so gas migrates into the well. This process intensely uses water to the rate of 1.2-3.5 million gallons of water per well, diverting water from other human demands. Fracking subjects people to pollution exposure through surface spills, air pollution, the migration of gases to the surface and contaminated water. This bill was filed as two separate bills by legislators in the last session. I and many other legislators signed on to the bill in support of preventing the start of any fracking activities or fracking-related business in Massachusetts. The State of New York took the bold step of banning fracking in the state last month. Massachusetts does not have the same high level of fuel deposits which could be fracked as New York. However, our state is in close proximity to fracking activities and we should discourage activities, which expose our water to pollution when we spend taxpayer money to protect and treat our water resources.

Passing legislation entails a specific process and schedule of activities and it’s helpful to understand this process if you’re interested in advancing a bill. The legislative process begins after a bill is filed by a legislator with the House or Senate Clerk’s Office. Each bill is given a number and assigned to the appropriate Legislative Committee. There are 26 of these committees, each responsible for studying the bills which pertain to a specific subject matter areas. The Committee then holds a public hearing and hears testimony regarding the petition from the public, government officials and office holders. I encourage constituents to advocate for bills they have an interest in by testifying or submitting written testimony. After the hearing is held, the Committee issues a report recommending whether the petition ought to pass, ought not to pass, be subject to further study or discharged to another committee.

A bill reported favorably appears in the Journal of the House or Senate and is given its first reading, usually followed by referral to another committee for further review. A measure reported adversely will not proceed further unless the unfavorable report is overturned by a vote of either branch. There are several procedural steps the bill goes through in both branches before final passage. The bill advances through three readings and is engrossed in the second legislative branch. If the bill is amended by the second branch, it will have to be returned to the first branch for a concurrence vote. If concurrence is rejected, a bi-partisan conference committee of three members from each branch is appointed to craft a compromise bill that will be sent to both legislative branches for a final vote. The conference committee’s report recommending the compromise bill is not subject to amendment. A vote to enact by both legislative branches results in passage of the bill, with the newly created act sent to the governor. The governor has the authority to sign the bill into law, allow the unsigned bill to become law, veto the legislation or send the bill back to the Legislature with recommended amendments. A new law usually takes effect in 90 days but can become effective immediately if it includes an emergency preamble which must be adopted by a two-thirds vote of the legislature or by an emergency declaration by the governor.

It is important to note that legislation can be filed throughout the two-year cycle, however it requires additional steps that may delay the bill. The legislative process is extensive but thorough and allows for opportunities for individuals to express their opinions and suggestions on matters. I look forward to representing the interests of my constituents in the upcoming legislative session and welcome your input on bills which I have filed, or bills that have been filed by other legislators in the new session.