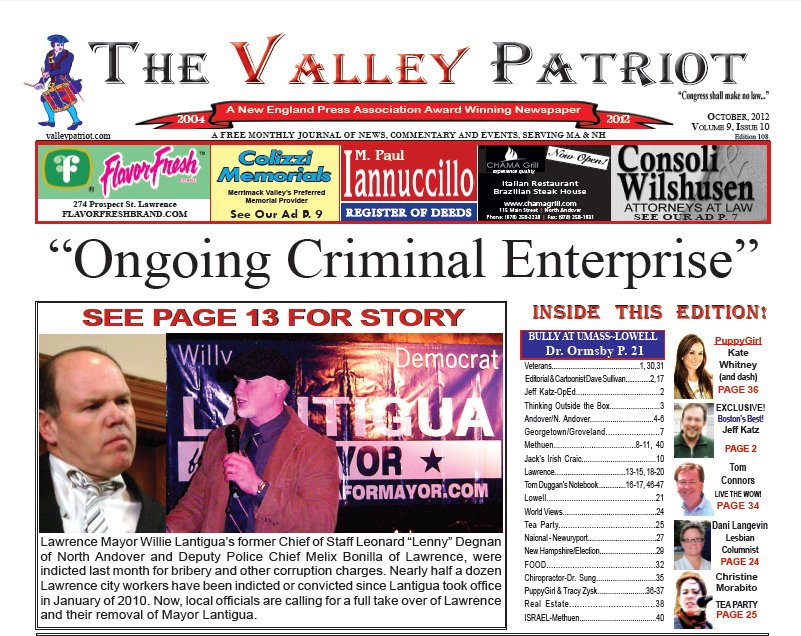 In the wake of two more members of Lawrence Mayor Willie Lantigua’s administration being indicted last month, local officials are calling for Lantigua’s resignation and a complete state takeover of the entire city and one state representative calling he Lantigua administration a “criminal enterprise.”

What’s more, Lawrence City Councilor Marc LaPlante says that he is concerned the “conspiracy” charges against Lantigua administration officials, Lenny Degnan and Melix Bonilla may lead to Lantigua himself.

LaPlante says he believes Lantigua must resign and held a press conference last month saying that Lantigua’s three years of mismanagement and wrongdoing “has been insult upon insult on the citizens of Lawrence. There has to be a point where we have to say enough is enough and today is that day,” LaPlante was flanked by School Committeeman Jim Blatchford and Wayne Hayes President of the Mount Vernon Neighborhood Association.

STATE MUST TAKE OVER

State Representative Jim Lyons, (R) Andover, told the Valley Patriot that the Lantigua administration is a “corrupt criminal enterprise” that should no longer be enabled by the state taxpayers. He says that the corruption in Lawrence will continue as long as the state money being dumped into the scandal ridden city continues to flow with no accountability.

Lawrence Councilor Marc LaPlante said that the conspiracy charges against both Degnan and Bonilla means that more indictments of the Lantigua administration are coming, calling it “sad for the city.”

“It is a sad day when we learn that people so close to Mayor Lantigua are charged with having broken the public trust,” LaPlante said. “Lawrence citizens deserve public officials who work for their interests not the political interests of a wayward mayor. The fact that the investigation is ongoing and that there is a conspiracy charge, alarms me that the unlawful activities may lead directly to Mayor Lantigua,” said LaPlante.

Republican candidate for State Representative in the 14th Essex District, Karin Rhoton and Jack Wilson, Republican candidate for Essex County Registry of Deeds (and an Andover resident) have also called for Lantigua to step aside. “The City of Lawrence has been put in a financial position that is untenable,” Rhoton said. “And the House of Representatives has enabled the city to drift for many years. The Lantigua Administration has been reckless in its financial decisions and it is time to have someone with backbone to stand up for the citizens of Lawrence and take the city back.”

THE INDICTMENTS AND INVESTIGATIONS

Bonilla was a sergeant on the Lawrence Police Department the day Lantigua was inaugurated in January of 2010 but was promoted over lieutenants and captains and made Deputy Chief. The Deputy Chief at the time was Mike Driscoll. He was summarily demoted to captain by Lantigua to make room for his campaign supporter.

Degnan has been the subject of scandal in Lawrence long before Lantigua appointed him and he spent more than $10,000 on curtains for Lantigua’s office.As a city councilor in the early 90’s Degnan was appointed acting mayor by his fellow councilors when Mayor Kevin Sullivan resigned, on the promise that he would not use the position to run for mayor as an incumbent.

The next day, Degnan announced his candidacy angering the city councilors who voted him to the temporary appointment. Degnan eventually lost the primary to Mary Claire Kennedy and Larry Lefebre. When Mary Claire Kennedy became mayor, Degnan became her top confidant, where he nearly bankrupted the city and caused the State Department of Revenue to impose a fiscal oversight board to control the city’s finances.

Mayor Lantigua was named in both the Degnan and Bonilla indictments. His name was also prominent in the indictment charges and conviction of former Lawrence Superintendent of Schools Wilfredo Laboy, who was convicted shortly after Lantigua took office. The two were inseparable during Laboy’s time as superintendent and Lantigua’s term as a State Representative.

“These indictments are the result of a lengthy and continuing investigation conducted by the Essex District Attorney’s Office with assistance from the U.S. Attorney’s Office, the Federal Bureau of Investigation, the Massachusetts Office of the Inspector General, and the Massachusetts State Police” said District Attorney Jonathan Blodgett. “The crimes alleged by these indictments represent a serious breach of the public trust.”

Lantigua has refused to turn over campaign finance reports concerning his financial activity during the last few campaigns. Lantigua says he will not turn over the mandatory filing documents unless law enforcement officials promise not to prosecute him for what he would be filing.

“Just based on what we know now,” Representative Jim Lyons told the Valley Patriot in an

“My role is to protect the taxpayer’s money and to do that we need a full state takeover of the City of Lawrence. In my opinion what we should be doing, if we are going to be fully funding their schools and a majority the city’s budget, is to have the state step in and run it. I am calling for full receivership of the city and I am calling for it now,” Lyons said.

Under full receivership Lawrence Mayor Lantigua could be removed as mayor, as well as the city council and be replaced with a state run receivership or oversight board.“Why should communities that are doing it right and acting responsibly with the money we give them, have to suffer because of Lawrence and communities like Lawrence?It’s not fair to the people of Andover, North Andover and Tewksbury. It has to stop,” Lyons said incensed.

“We have to stop funding this criminal enterprise we have to stop doing it. Why should the state continue to fund a corrupt administration? We all see what is going on here. The state needs to take it over and run it themselves, put them into full receivership. Why should we allow this kind of activity go on unabated? It’s our money. We need to take over that city at all costs. Whatever it takes to do that, we ought to do it.” 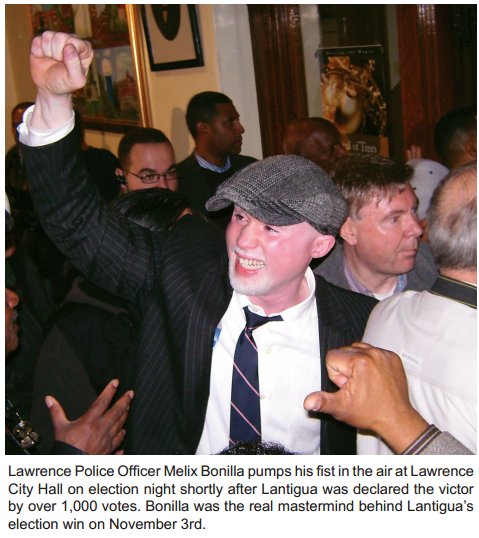 Despite the fact that state law mandates that indicted police officers have to be put on unpaid leave, Lantigua has chosen to continue paying his indicted deputy police chief Melix Bonilla more than $140,000 a year.

Four members of the Lawrence City Council wrote a letter to State Receiver Bob Nunes asking him to stop payments to Bonilla and comply with the law, but Nunes balked saying he was only in charge of the city’s finances not personnel issues.The four councilors who signed the letter to Nunes were: Councilors Eileen Bernal, Roger Twomey, Mark LaPlante and Daniel Rivera. The five members of the city council refused to sign the letter were Council President Frank Moran, who is also a candidate for state representative, Councilors Estella Reyes, Onaida Aquino, Sandy Almonte and Kendrys Vasquez.

“I think the payment to an indicted deputy police chief out of the taxpayers’ pockets is a financial issue,” Councilor LaPlante said in response to Nunes failure to act on stopping payments to Bonilla.

Nunes was appointed by Governor Patrick to oversee the city’s finances due to financial mismanagement and inability of the Lantigua administration to manage the city’s books.

IT’S OUR MONEY- GOVERNOR TURNS A BLIND EYE ON LAWRENCE

Representative Lyons said that he is also concerned that Massachusetts Governor Deval Patrick continues to conceal the spending of state taxpayer’s money and is calling for a full funding of what is called “Target Share” chapter 70 education funding. Lyons said the governor’s failure to act on the “ongoing criminal enterprise” known as the Lantigua administration and the city’s fiscal mismanagement was “staggering”.

Lyons said he is “very concerned, that the Patrick Administration has refused to fund “Target Share Funding”. Target Share Funding is legislation that was passed in the last year of the Romney administration to fully fund chapter 70 by allowing local communities to get at least 17.5% of their educational foundation budget from the state.

“That Patrick administration has refused to fully fund it, costing communities such as Andover and North Andover substantial money in education funds.” Lyons recently filed an amendment in the budget process to fully fund “Target Share” throughout the Commonwealth, which would cost the state about $112 million. It was defeated in the house but the senate was able to get some money back into the budget which resulted in education funding increased this year for education to local communities.”

“Everyone talks about fairness,” Lyons said. “Currently there is $152 million out of 158 million going to the City of Lawrence and what we are doing basically is, we are funding what we now know is a criminal enterprise at the expense of well run, efficient communities. And that has to stop. The Patrick administration has to recognize that we should not be funding these corrupt communities at the expense of the honest communities that do it right. It isn’t fair to towns like Tewksbury, Andover and North Andover.”

Currently The Town of Andover gets 13-14% of their education funding from the state, North Andover gets about 15%. “The city of Lawrence gets more than 95% of their education funding from the state and look at what they are doing with it. This is why we need transparency on Beacon Hill. The Deval Patrick Administration refuses to tell the public where their money is going. Whether it is illegal aliens getting benefits, the EBT spending, patronage jobs, the process has to be opened up on Beacon Hill and we have to let the people know what we are doing with their money. Right now it is funding corruption and criminal activity and I ask is that fair?”

Lyons says that the Target Share funding for education and a full takeover of the City of Lawrence will protect the taxpayers money and is urging Governor Patrick and his colleagues in the legislature to “move immediately” to take over the city and fairly distribute education dollars.