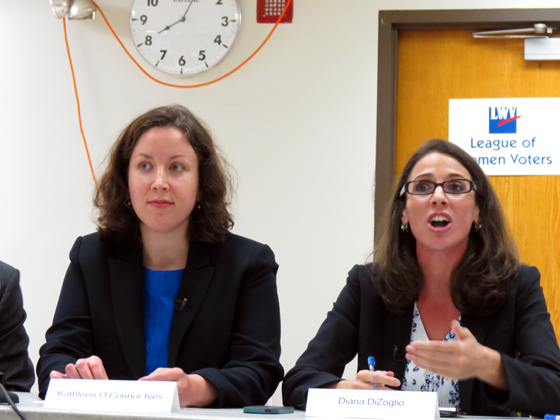 The law will make sweeping changes to MGL Ch. 66, which currently states that public agencies and municipalities must turn over public documents and public information within ten days of the request by a member of the public.

The problem with the 40-year-old law is that there are no penalties for public officials who violate it.

In November of last year, the House of Representatives unanimously passed changes to the public records law, (submitted by Rep. DiZoglio) but, watered down most of Duggan’s language after the Massachusetts Municipal Association started lobbying for their members who would be paying the fines for not turning over documents.

The House stripped out penalties for officials who violate the public records law and actually increased the time frame that public officials have to turn over public records.

This month, the State Senate voted to pass most of the House version of the bill, but not before making some needed changes, and returning some of Duggan’s language, which he says will protect the public’s right to know what their government officials are spending their money on.

“It took tremendous courage for the Senate, in particular, Senators Ives, Tarr, Ross, and L’Italien, to stand up to the Mass. Municipal Association and their surrogates in the House. This was not a very popular piece of legislation in the power chambers on Beacon Hill. In fact, the first two times I submitted this through Rep. Dizoglio and Sen. Ives, it never even made it out of subcommittee. By amending this bill, the Senate is putting stricter penalties on officials who break the law and the ability for the public to get back legal fees for suing public agencies who refuse to turn over public documents,” Duggan said.

State Senator Ives said that the new language in the bill “would allow a Superior Court to award reasonable attorney fees to requestors who seek and obtain judicial relief after their request for public records was not completed.”

A government entity may also be required to pay punitive damages, ranging from $1,000 to $5,000 if a Superior Court rules that they acted in bad faith.

Damages would be directed to a fund to support municipal improvements to their information technology capabilities.

State Senator Barbara L’Italien, who also supported the changes to make the public records law more strict, said she was happy to have a unanimous vote.

“I was proud to stand with my colleagues in passing our bill to make public documents more accessible to the public and reform our public records law, which is widely considered to be one of the weakest in the nation.”

“It is simply unacceptable that the media and ordinary citizens should face unreasonable delays and high fees to gain access to information that rightly belongs in the public domain,” said Sen. Jason Lewis, D-Winchester.

“Government transparency and accessibility are fundamental to a healthy democracy. This important reform legislation will help bring the Commonwealth into the 21st century and strengthen the public trust in our government institutions.”

Senate Bill 2120 would allow public agencies and municipalities 15 days to comply to a request for public records instead of 10 under the current law. It will also demand they charge reasonable fees in order to produce requested information. The public cannot be charged more than five cents per black-and-white page copy provided to a requestor.

Additionally, state government entities may only charge an hourly rate equal to the rate of the lowest paid employee capable of completing the request after the first four hours of labor, but that rate would not exceed $25 per hour.

Municipalities may begin to charge an hourly rate after two hours of labor. Fees may be waived or reduced if a request is made in the public interest or if the requestor lacks the financial ability to pay.

A public official cannot charge a fee if they fail to furnish the requested records within 15 days of the request, or if they do not respond in 10 days to notify the requester of the need for an extension. Such notifications must provide a detailed, written explanation for the need of an extension and include an estimate of fees and an alternative time in which the records can be reasonably produced, but not to exceed 30 days.

Now that the House and Senate have passed different versions of the new public records bill, those differences have to be resolved in what is called a conference committee. There, three senators and three members of the House will pour over the bill and negotiate the final wording to be passed by both houses of the legislature and then must be signed by Governor Baker.

On February 12th, the conference committee members were announced.

The conference committee members who will decide the final language of the public records bill are: Sen. Joan Lovely of Salem and Rep. Peter Kocot of Northampton will lead the conference on legislation (S 2127/H 3858) aimed at making public records more easily available. They will be joined by Sens. Jason Lewis and Donald Humason and Reps. Stephen Kulik and Matthew Muratore.

While conference committee meetings are open, conferees on Beacon Hill almost always conduct their business in secret after voting to close their meetings.