By Tom Duggan on October 9, 2011Comments Off on Senator Finegold Gets $631K Grant for Lawrence Police 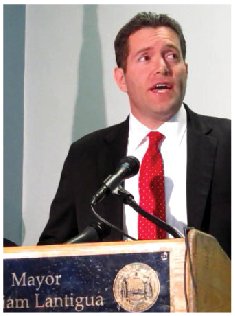 Asked if there were any restrictions on how the grant money can be used, Secretary of Public Safety Mary Ellen Heffernan said, “The restrictions are for the chief to decide how he wants to deploy the officers. It’s for police officers that were laid off. It’s to bring them back, but how the money is used is up to the chief.”.
Under the Charter of the City of Lawrence, Police Chief John Romero is considered a department head that must follow the directives of Mayor Lantigua. In essence, Chief Romero can spend the money the way he wants if the Mayor lets him, but Mayor Lantigua could direct him to spend the money differently.
Finegold said that the money is part of a grant awarded to several communities “…to help out cities that had a lot of [police] layoffs, Fall River, Lowell, and other cities that are high crime areas. To me the priorities have to be public safety, because if we can’t keep the city safe, then economic development and education will fall.”
“We were able to give Lawrence about 2/3 of what they were looking for,” Heffernan added.
“Because we had so many folks looking for money from this line item, its formula driven, and Lawrence was at the top of the list.”
Mayor Lantigua did not speak at today’s press conference and left the room when the press conference started.