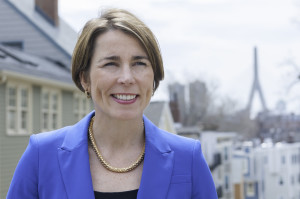 An Avon-based businessman and his bookkeeper who illegally contributed to Attorney General Maura Healey’s political campaign have agreed to pay $7,500 and $2,500 respectively to resolve a review by the Massachusetts Office of Campaign and Political Finances.

The state fined Brian Bairos, the owner and president of Colorado Ave., LLC, in Rhode Island, and McIsaac and Bairos New England Distribution, LLC, in Avon. Ashley Arruda is the bookkeeper for the Avon distribution company.

According to the disposition agreement, Bairos’ company, and Arruda personally, made contributions to three candidates in 2015 by arranging for multiple individuals to make contributions in their own names, totaling $9,000.

The campaign finance laws prohibit contributions made in a manner to disguise the true source of the funds, and prohibits corporations from contributing to candidates directly or indirectly. This is the 11th “true source” case resolved by OCPF since 2013, resulting in a total of $566,000 in civil forfeiture payments. All disposition agreements are posted on the OCPF website here.

In a press release Monday, officials at OCPF said there is no reason to believe that the candidates knew they received illegal contributions. The candidates have voluntarily disgorged, or will disgorge, the prohibited funds by Dec. 31, 2016.  Disgorgements are made according to the “residual funds clause” in Section 18 of the campaign finance law – to the state, a municipality, charity or scholarship fund.

A disposition agreement is a voluntary written agreement entered into between the subject of a review and OCPF, in which the subject agrees to take certain specific actions.