By ValleyPatriot on December 4, 2020Comments Off on ‘Ted Lasso’ is a Winner for AppleTV+ ~ TV TALK with BILL CUSHING 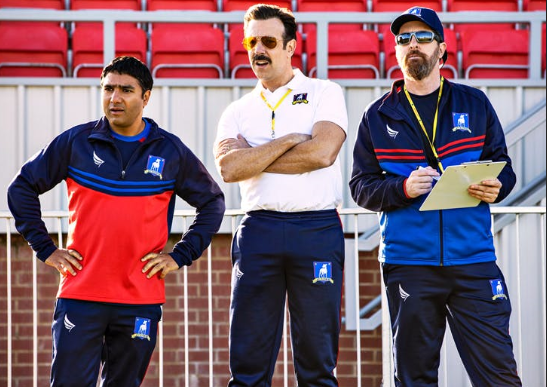 ‘Ted Lasso’ is a successful college football coach from Kansas hired to be the manager of a professional soccer team in England, despite having no experience coaching soccer. That’s the premise of a delightful new series from AppleTV+ starring Saturday Night Live alum Jason Sudeikis.

The character of Ted Lasso was created for a series of commercials back in 2013 for NBC, promoting the networks Premier League soccer coverage. Creators Sudeikis and Bill Lawrence (Scrubs, Spin City), decided to expand on that character and develop this series around him. Bad idea, right? This series couldn’t possibly work, could it? But it does. ‘Ted Lasso’ is a wonderfully amusing, surprisingly heartfelt sports sitcom that really isn’t that much about sports.

Lasso is hired to manage the fictional AFC Richmond, who are described as perennially mediocre Premier League mainstays. Why? Because Rebecca, the owner of the team, wants the team to fail to spite the former co-owner, her soccer-loving ex-husband. But why would Ted leave a successful college football job for a sport he knows nothing about? For sentimental reasons, actually. He is giving his own wife some space by moving to London while she stays in Kansas. Hoping this will help his struggling marriage.

Needless to say, Ted is met with utter disdain and contempt from his players, and from the local media. But he doesn’t get discouraged. He is joined by his assistant, Coach Beard, and together they operate on the idea that a team wins games, not just on the field, but also in the locker room. What Ted lacks in his knowledge of soccer, he more than makes up for with his relentless optimism. He’s incredibly thoughtful and always learning, and he treats everyone he meets with kindness and respect. Ted actually cares what people have to say, from the equipment manager who gets picked on by the AFC Richmond players to the fan in the street who yells “Wanker!” at him. He shows people he’s willing to listen to them no matter how rudely they speak to him. Ted eventually wins over Rebecca, and his team, including his aging but legendary team captain, and eventually they are willing to run through a wall for him.

The writing is sharp and fresh, and the show has a strong supporting cast that includes Brett Goldstein as Roy, the team’s insecure captain; Phil Dunster as Jamie, an arrogant up and coming superstar; Nick Mohammed as Nate, the aforementioned equipment manager whose knowledge of the game is just the thing Ted needs on his staff; Brendan Hunt as Coach Beard, Ted’s right hand man and friend. Hannah Waddington as the team owner Rebecca; and Juno Temple as Keely, a model/actress girlfriend of Jamie’s. All of them are terrific in their respective roles.

In a time when people are looking for something to make them feel good, ‘Ted Lasso’ delivers big time. Tugging at your heart strings more than once, while providing a tremendously entertaining series. Do yourself a favor and watch it.

‘Ted Lasso’ has already been renewed for a second season and producers have hinted on social media that a third season is also a done deal. All 10 episodes are available to stream on AppleTV+.
If you have any questions about TV you can email me at BillsTVTalk@gmail.com.  I will answer all of your questions and will feature some of the questions I receive in a future Mailbag column.
Follow me on Twitter and Instagram @BillsTVTalk and on Facebook at BillsTVTalk for daily up-to-the-minute TV news and discussion.