By Christine Morabito on February 14, 2013Comments Off on The War on The Poor & Taxpayers is Going Well 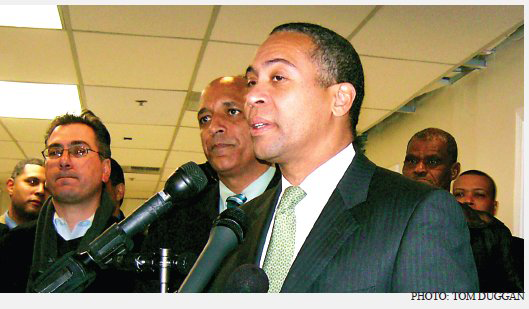 Governor Deval Patrick claims his budget for fiscal year 2014 promises “a better Commonwealth for the next generation.” – That is, if they can afford to live here.

On January 16, the Patrick administration introduced “The Way Forward,” an ambitious proposal to tax the middle class out of existence. The proposed increase to the income tax, gas tax, fare rates and fees, have residents threatening to leave the state.

Luckily, this budget, or “House 1,” is merely a proposal from the governor. State representatives will submit their own budget in April, taking the governor’s wish list into consideration. Then the issue goes to the senate before the new fiscal year begins in July.

Conspicuous by its absence is talk of any meaningful spending cuts or reforms. The money pit that is the state’s transportation budget would get an infusion of $269 million. The Massachusetts Department of Transportation, which brought us the Big Dig, would again be rewarded for bad fiscal behavior.

The plan calls for “modernizing” the state’s bottle redemption law to include bottled water and sports drinks. There would be a candy tax, soda tax and a dollar increase in the cigarette tax.

Many residents are unaware that we will already pay more to shop in 2014 thanks to Patrick’s agreement with the online retailer, Amazon, to begin to collect sales tax in Massachusetts. Clearly, it is the working poor who will be most affected by these proposed tax increases. I want to believe the governor has compassion for the middle class, but the evidence suggests otherwise.

Patrick wants to spend an extra $550 million on education. We love our children, but considering we spend a yearly average of $12,000 per student on public education – enough to send every student to a private school – how much more do we need to spend? Due to a serious lack of transparency in our school budgets, we have no idea where all this money actually goes.

Adding insult to injury, we recently learned the details of Patrick’s plan to eliminate dozens of tax breaks. If he gets his way, this would mean a far reaching and all-encompassing tax increase on everyone in the Commonwealth.

It is unfortunate that these proposals will also eliminate tax credits that incentivize certain behavior, such as lead-paint removal, charitable contributions, septic system repair, clean-fuel vehicles and renewable energy.

Health Savings Accounts are a responsible and effective way for people to save (tax free) for future health care needs. Patrick wants this tax savings eliminated.

To be fair, the governor is calling for the doubling of personal exemptions, but the eliminated deductions, the myriad of new taxes and fees will more than make up the difference. Patrick also claims he wants to decrease the sales tax, but again, any savings would be eaten up by all the new taxes being considered.

Taxpayers are in no mood for this. We are freshly annoyed by the reinstated 2 percent withholding tax that went into effect in January. Those making $30,000 will now bring home $600 less per year, those earning $50,000 will bring home $1000 less per year, and so on. Evidence shows that this tax increase disproportionately affects lower income earners. Wait till they hear that the governor has even more designs on their wallets. He might as well push us down and take our lunch money.

As I was reading the budget, under the heading “Other Budgetary Revenues,” I noticed the following, “… the expansion of the hotel surcharge to rental properties.” Rental properties? Perplexed, I called the governor’s office and politely asked for clarification. After being hung up on the first time, I called back and spoke to a pleasant woman who put me on hold for what seemed like eternity. She returned and asked if she could call me back, stating the provision was “hard to explain.” That was 5 days ago. When the phone doesn’t ring, I’ll know it’s the governor’s office.

Payroll Tax Hike Will Affect Your Paycheck and the Economy