By ValleyPatriot on November 27, 2015Comments Off on TV’s Funniest New Show is ‘Life In Pieces’ ~ TV TALK with BILL CUSHING 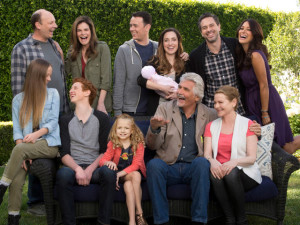 It’s not that often that I write about a comedy. Quite frankly it’s because I think that most of the comedies on the air today just aren’t that good. There are a few good ones; Big Bang Theory and Modern Family are two of them. But a new comedy premiered this season that just might be the best comedy on network TV. It’s CBS’ Life In Pieces.

When I first saw the previews for this show several months ago, I wasn’t very impressed. It looked like it could be a Modern Family rip-off and many critics have compared it to the ABC show. While it is similar to Modern Family, it is definitely its own show. The show is also about a big family, and goes without a laugh track, but that’s about where the similarities to Modern Family end.

Life In Pieces stars Dianne Wiest and James Brolin as John and Joan Short, the parents of the Short family. They have 3 grown children, one daughter and two sons. Heather (Betsy Brandt) is their daughter and she is married to Tim (Dan Bakkedahl) and they have 3 kids of their own. Greg (Colin Hanks) is married to Jen (Zoe Lister Jones), and they are new parents to a daughter. Finally there is Matt (Thomas Sadoski) who still lives at home and is in a relationship with his boss, Colleen (Angelique Cabral).

The show begins with the printed promise of “One big family. Four short stories. Every week.” That’s part of what makes this series unique, and different from Modern Family. The premise for the series is four different stories involving the family every episode. The stories are broken up in to short vignettes with their own titles.

The show has drawn lots of favorable reviews and the ratings have been very good. It’s because the show resonates with its target audience, families. It shares experiences that most families have been through already. In the first episode, Greg and Jen are overwhelmed at being first time parents. Heather and Tim are taking their oldest on college tours while contemplating having a new baby themselves. Matt is on a first date with his boss who lives with her ex-fiancé. Meanwhile John is having a funeral themed 70th birthday party.

One hilarious sequence has the men in the family struggling to cut down a tree in the front yard, all except for Tim who is having an adverse reaction to a cup of espresso. The whole scene playing out in slow motion while “Holding Out For a Hero” plays over it and the women watch with disgust from inside the house.
As the weeks go on, the show will continue to iron out the rough spots. And it definitely will because, aside from the great cast, the show really has some sharp writing, creating very funny stories. It is easily the funniest comedy of the new season.

Life In Pieces was just picked up for a full season by CBS. It airs on Thursdays on 8:30.