By Paul Murano on September 24, 2014Comments Off on Two Flavors of Barbarism ~ BENEATH THE SURFACE 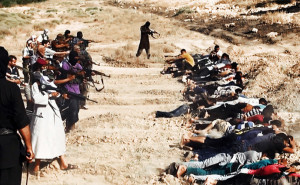 It happened again. A terrorist took the life of another American, using his knife to cut off the innocent’s head. This act of savagery was performed in broad daylight and there were no ramifications, legal or otherwise. These killers will do it again, and again. Many carry out their murderous barbarism once or twice a week, with very little protest. They justify this “choice” to kill by rationalizing it as a good and necessary act, which raises several questions: Why don’t we see more “moderate” people publicly protesting? Why do the less extreme elements of the population remain silently complicit?

And why the confusion of not having a “strategy” to combat this unspeakable crime? One bible quote comes to mind: “You hypocrite, first take the log out of your own eye, and then you will see clearly to take out the speck that is in your brother’s eye” (Lk 6:42).

The above paragraph described the neighborhood abortion clinic in America. The abortion knife decapitates and literally slices up the body parts of approximately 4000 innocents each day. Thousands more innocents will die from this knife tomorrow, and there will still be no real “strategy” to stop it. In fact, the strategy of this current administration is to fill Supreme Court openings with those sympathetic to such barbarism so that the killing will continue well into the future.

Last month in this publication I compared two kinds of barbarism with the two kinds of hate: anger and apathy. In a sense anger is pre-love and apathy post-love. Anger cries out for an answer while apathy has given up on one. Anger is demonstrable while apathy is more subtle, displaying a contentment with self-indulgent pleasure. I mentioned that this culture clash of east and west, of fundamentalist Muslims with secular humanists, seems to be a clash between pre-Christian and post-Christian ideologies. One has not yet met the Incarnate Divine Power that offers personal freedom, forgiveness, healing, and inner peace while the other has prospered from union with Him only to reject Him for self-indulgent pleasures.

The clash is marked in the way each civilization treats its women: One dominates their women while protecting them from lust, while the other legislates women’s equality while using them as lust objects.

One thing I did not mention in last month’s reflection, however, is the cause and effect correlation. Outside forces do not make a body fall until or unless it is weakened from within. A strong body can withstand much, but a weak one is vulnerable. The cultural left, i.e. secular humanism, is the disease that weakens America from within, enabling her enemies to gain ground. America’s immune system has been highly compromised and the foreign bodies are aware of it. Extreme Muslim fundamentalism gains courage and strength the more leftist secular humanism gains power. Look at the recent history.

Through the media and academia the cultural left has stripped much meaning and order out of the lives of young people: It is no wonder that British and American young men are now joining jihadist forces against us. A gang mentality may seem like the only refuge for young men dazed and confused by all of liberalism’s experimentation with human nature and sexual identity, which strips them of their masculinity and their dignity.

The irony remains that the more our nation divorces herself from her divine Spouse, who strengthens and protects her, the more vulnerable she becomes to attack from violent suitors that seek to dominate her. As Pope Francis recently indicated, unjust aggressors like the murderers of ISIS/ISIL must be stopped. This is an immediate solution. The longer-term solution, however, is acceptance of the world’s Savior, the Prince of Peace, sent to offer pining souls rest and hopeless souls meaning. Love incarnate, who offers freedom from the shackles of anger and apathy, domination and lust, is the only real solution to overcoming the cycle of violence – inside and outside of the womb. Mere political solutions will always be shallow and temporary fixes.