102 Infantry Division, Crossing the Rhine into Germany with Bob Chase ~ VALLEY PATRIOT OF THE MONTH, HERO IN OUR MIDST

By Tom Duggan on August 27, 2019Comments Off on 102 Infantry Division, Crossing the Rhine into Germany with Bob Chase ~ VALLEY PATRIOT OF THE MONTH, HERO IN OUR MIDST 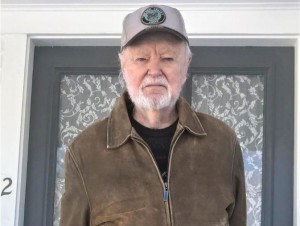 Living throughout the Merrimack Valley, with his family during his adult life, originally from Lynn, Massachusetts, Robert was born on July 17, 1926 and is a graduate of Lynn English High School. He served in the US Army in the European Theater during the Second World War with the 102 Infantry Division. He now lives with his son Glenn, in Rollinsford, New Hampshire.

Bob Chase reached the rank of Sargent First Class in the US Army, and later served in the Massachusetts Army National Guard reaching the rank of Major, after the war. He was an infantryman, considered to be the backbone of the US Army, even to this day. During World War II, the standard issue weapon of the infantryman was the M-1 Garand. Each World War II era infantryman in the European Theater, carried this weapon, along with a bayonet, and four clips of eight cartridges each for a basic combat load of thirty-two rounds.

During our breakfast meeting, Bob pointed out the seasoned infantrymen in his unit would carry a lot more ammunition. Extra ammunition was taken from wounded soldiers, those killed in action, and those rotating to the rear. Some soldiers would simply get in line twice and draw a double issue of ammo. Water, socks, and ammunition were the infantryman’s best ally.
While having breakfast, Bob talked about the 102 Infantry Division crossing the Rhine River into Germany near the end of the fighting in Europe. His unit was brought across by the US Navy, despite being miles from the nearest ocean.

Bob cleared up a question I had about gear, in combat, infantrymen travel light. Bedding, changes of clothing and cold weather gear were left behind in favor of ammo, water, socks and a little food. He recalled his duffle bag being put into storage when his outfit was sent into combat and stated that was the last time he ever saw his personal gear. Once, during a break in the fighting, a US Army truck came up from the rear echelon and dumped a pile of boots and uniforms out for his platoon to sort through to see if they could find something that would fit. This delivery of gear came, as Bob put it, after the rear echelon troops picked through the gear to meet their needs.

Bob’s division was formed on September 15th, 1942 at Camp Maxey, Texas. During the war, the division had three different Commanders, Major General John B. Anderson, followed by Major General Frank A. Keating. The last Commander was Brigadier General Charles M. Busbee, who led the unit until it was deactivated in February 1946.

The 102nd Infantry Division, under the command of Major General Frank A. Keating, arrived on the Western Front in the European Theater of Operations at Cherbourg, France, in September 1944. After a short period of training, the division moved to the German-Netherlands border. The division entered combat in October of 1944 and assumed responsibility for the sector covering Wurm to Waurichen. In November of 1944, the division prepared for an attack on the Roer.

After serving along the Roer, the division took over the XIII Corps sector from the Wurm River, north of the village of Wurm, to Barmen on the south, and trained for river crossing. During February 1945, the 102d attacked across the Roer, advanced toward Lövenich and Erkelenz, bypassed Mönchengladbach, took Krefeld, and then reached the Rhine. During March, the division was on the defensive along the Rhine, its sector extending from Homburg south to Düsseldorf. Crossing the river during April on pontoon bridges, the division attacked in the Wesergebirge, meeting stiff opposition. After several days and nights of terrific enemy resistance, the towns of Wilsede and Hessisch-Oldendorf were captured. In April of 1945, the 102d pushed on to the Elbe, meeting little resistance. Breitenfeld fell, late in April. Afterward the division outposted the Elbe River, 48 miles from Berlin. In May 1945, our American Soldiers shook hands with their Russian allies, the Soviet Troops were part of the 156th Division, the two units met just outside Berlin. 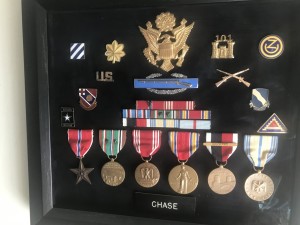 Elements of the Division uncovered a barn where the Germans killed over a thousand Jewish Concentration Camp Prisoners. The Commanding Officer made the local German civilians bury each prisoner and erect a White Star of David over each grave. The division patrolled and maintained defensive positions until the end of hostilities in Europe, then moved to Gotha for occupational duty.

The Division served in combat for 173 days, all of which were in the European Theater, and was awarded four Distinguished Unit citations. Soldiers in the 102st Infantry, earned eight Distinguished Service Crosses (second only to the Medal of Honor) six hundred and eighty-six Silver Stars, and over five thousand Bronze Stars. Over four thousand men in the Division received the Purple Heart. For his service to our nation, Bob received the Bronze Star, the coveted Combat Infantry Badge, the European Campaign medal, and the World War II Victory Medal.

After the war, Bob married his wife Dorothy, and the couple had four children, three boys and a girl. Over breakfast, I had the honor of meeting one of his sons, who is also a Veteran. After the war Bob worked for the Richardson Company of Des Plaines, Illinois. He left to start the Rotary Plastics Company in Lynn, Massachusetts, his wife became ill, and died in 1969. Rotary Plastics was sold to Commercial Plastics in 1970. Then Bob joined the firm of Dellinger Sales, as a manufacturer’s rep, and stayed until 1980.

He started the New Hampshire Clinic for Hypnosis which he ran until he retired. Typical of his generation, Bob helped to save the world in 1945, then came back to the United States after the war, spending the rest of his life, quietly working and raising his family, during much of his working career, Bob was another kind of hero, a single parent! ◊

John Cuddy served in the US Navy’s Construction Battalions (also known as the Seabees) after retiring from the Navy; he earned a BA in History and an MA in Economics from the University of Massachusetts on the Lowell Campus. He has been employed in Logistics at FedEx for the last 22 years. If you know a World War II Veteran who would like their story told, please email him at John.Cuddy@Yahoo.com.

102 Infantry Division, Crossing the Rhine into Germany with Bob Chase ~ VALLEY PATRIOT OF THE MONTH, HERO IN OUR MIDST added by Tom Duggan on August 27, 2019
View all posts by Tom Duggan →