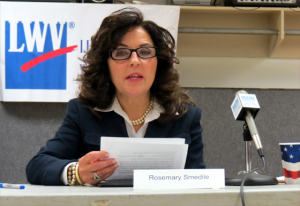 Rosemary Smedile is running for state representative from the 14th District including parts of North Andover, Lawrence, Methuen and Bradford. Rosemary graduated from Boston College with honors. Married 33 years with three children, she is a small business owner and has served the North Andover community for 5 years on the Finance Committee and 13 years on the Board of Selectmen with several years as Chairperson on both boards.

Smedile says she is running for the state legislature because of her dismay over the financial condition of the Commonwealth, lack of transparency in state government, and high, unwarranted taxation that is eroding the standard of living of our citizens.

Smedile points out that the state of Massachusetts ranks 45th in new job growth according to Moody’s, is the 2nd highest in business costs according to Forbes, and according to Gallop is the 7th highest where voters feel taxes are too high.

She says she believes it is the result of the anti-business climate on Beacon Hill. Most state legislators have never experienced the dedication, long hours, and hard work necessary to run a small business. She also says that they have passed legislation during an economically depressed period making it even more difficult for first time job seekers to find work.

Smedile says her opponent, Diana DiZoglio voted against proposed local aid increases, against a rollback of the income tax to 5%, and also voted with the Democratic majority to oppose allowing more time (48 hours) for legislators to read the final state budget.
Smedile says these kinds of votes are against the interests and sensibilities of the majority of Massachusetts voters.

Rosemary believes that any perceived need to increase revenues (taxes) can be met many times over by greater transparency at the State House, elimination of corrupt practices, and a halt on wasteful spending which runs in to the hundreds of millions, if not billions, annually. She says she will dedicate herself to that effort if elected on November 4th.