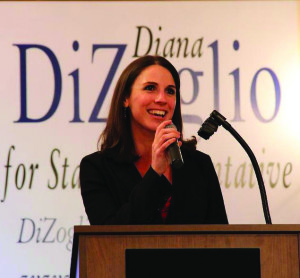 She says that what she is most proud of is co-sponsoring a bill to put photo ID on EBT (welfare) cards.

“It’s really important to have photo ID on EBT cards because it helps to eliminate fraud. You will never get rid of all fraud but this goes a long way.”

DiZoglio lives in Methuen and considers herself a moderate, despite attacks from her primary opponents calling her too “conservative” and her final election opponent Rosemary Smedile trying to portray her as too “liberal.”

DiZoglio also says she voted to roll back the sales tax to 5% “when it came up as a standalone vote.” Roll call votes from the legislature’s website shows DiZoglio voted for decreasing the sales tax but not the income tax. “When they presented it as a package to lower the income and sales tax, I voted no. I believe they should be stand-alone votes. I voted for rolling back the sales tax. What is sad is that my opponent is trying to manipulate people to believe I am against things when I am for them to suit her political ambitions.
DiZoglio also says she also voted for a “huge” increase in local aid going back to cities and towns.

Then another amendment came before us to increase local aid even more and yes, I voted against that because there was no way to pay for it. We can’t just spend, spend, spend all the time and not have a way to offset those costs.

DiZoglio’s bill changed that and now, municipal office seekers are held to the same standard as candidates for state office.
Legislators called it the Lantigua Bill because Willie Lantigua ran for mayor of Lawrence in 2010 with multiple campaign finance violations and ran for reelection last year still refusing to comply with state’s campaign finance laws.

DiZoglio also submitted legislation to put penalties into the state’s public records law when officials refuse to comply with turning over public records.